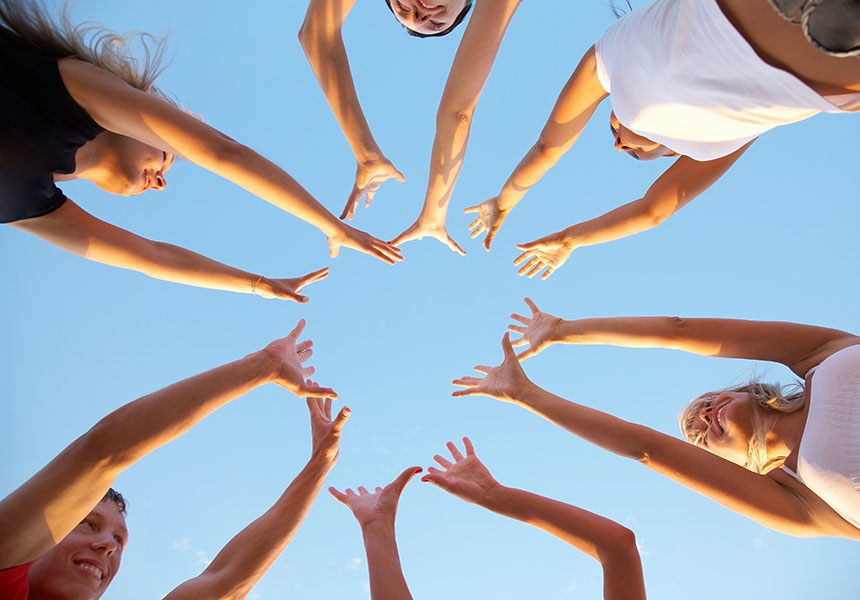 How good would it be to arrive home after a busy day at work to the delicious aroma of curried home grown vegetables prepared for you and your family?

Three nights a week, residents at South Hobart’s Cascade Cohousing get just that — a free hot meal cooked and served by another resident using a roster system. For every 12 meals, they source and prepare one for everyone else.

Cascade’s 14 households also share a common house with guest rooms, a laundry, a garden, tools, chores and babysitting. They enjoy film and video nights together as well as parties, dancing and cricket with the kids.

In a world where fewer people know their neighbours, cohousing is bucking the trend by establishing close-knit communities that live sustainably and share many aspects of their lives.

The model, which originated in Denmark and is popular in the USA, involves a group of dwellings sharing among other things a common house.

Homes are private but residents share things such as gardens, playgrounds and laundries. A car park keeps the grounds car-free so children can play safely and adults can socialise.

Cascade residents own their homes and maintain the grounds with elbow grease and body corporate fees. Mr Higginbottom estimates that the costs are 50 per cent less than comparable single properties. Common facilities are free except the shared clothes dryers.

Australia has three other cohousing communities; a federally-funded public project near Cascade, another in Fremantle and one in Melbourne. More are being planned.

Murundaka Cohousing Community in Melbourne’s Heidelberg Heights has 18 modern, sustainably designed apartments and two houses on 3,000 square metres. It boasts about eight children, including a baby born soon after the first members joined in 2011.

Plastic containers, jars and egg cartons are collected for re-use or recycling and an open closet stores unwanted clothing, books and toys that others can take or give to opportunity shops.

Their 6500-kilometre cycling odyssey ended at Murundaka, ironically in their hometown. Ms Chishkovsy loves it and says she feels rich despite never having a large income.

The property is owned by not-for-profit Common Equity Housing Limited (CEHL), which runs about 100 housing co-ops with 2,100 affordable rental properties.

Murundaka residents pay rent that is generally capped at 25 per cent of their disposable income. If their income drops, so does their rent. Body Corporate fees are only $14 a week per adult, which covers shared bills and internet.

Residents pay their own gas, electricity and water bills but these can be minimised by shared meals and using the air-conditioned common house during hot weather. They only put out four to five bins per week, compared with up to 36 for a similar sized housing development.

Regular meetings are held to make decisions and residents share babysitting and approximately three communally cooked meals each week, usually with produce from the garden and eggs from the 16-strong chicken coop.

Iain Walker helped set up CEHL about 30 years ago after researching overseas models. He lives at Murundaka and some of his seven adult children visit, staying in the shared spare rooms.

While it isn’t the cheapest way to live, Mr Walker said cohousing saved money and improved quality of life.

“We’re trying to recreate the traditional neighbourhood,” he said. “I have so many of my friends that say ‘I know the first name of the neighbour on one side but the rest of the street I wouldn’t have a clue.’”

Mr Higginbottom agreed many suburban communities were not as connected as they used to be, partly due to house design and fewer people being involved in church and community groups.

Cascade facilitates interaction by having cars off site and using the common house. About 10 meetings are held annually and each household commits to 20 hours of maintenance/gardening a quarter.

A third of the grounds, set on five to six suburban blocks, are set aside for food gardens and bush. Mail is delivered centrally and there is a shared laundry.

Mr Higginbottom and his co-founders spent time and money developing Cascade, but it is now easier to establish cohousing using models like his. Sites such as cohousing.org document the experience world-wide.

“It’s a housing option … that has much more interaction with your neighbours, with the joys and challenges, and offers that sense of community,” Mr Higginbottom said. “It’s an interesting mix of the private and the common.”

Interested learning more about cohousing? Here’s where you can learn more:

Murundaka Cohousing Community will have a stall at Melbourne’s Sustainable Living Festival (slf.org.au) from February 14-16, and will hold an Open Day with workshops on Saturday, February 22, at 42 Bamfield Rd Heidelberg Heights. Details and bookings at www.murundaka.eventbrite.com.au.

The economies of sharing, part one: Cohousing