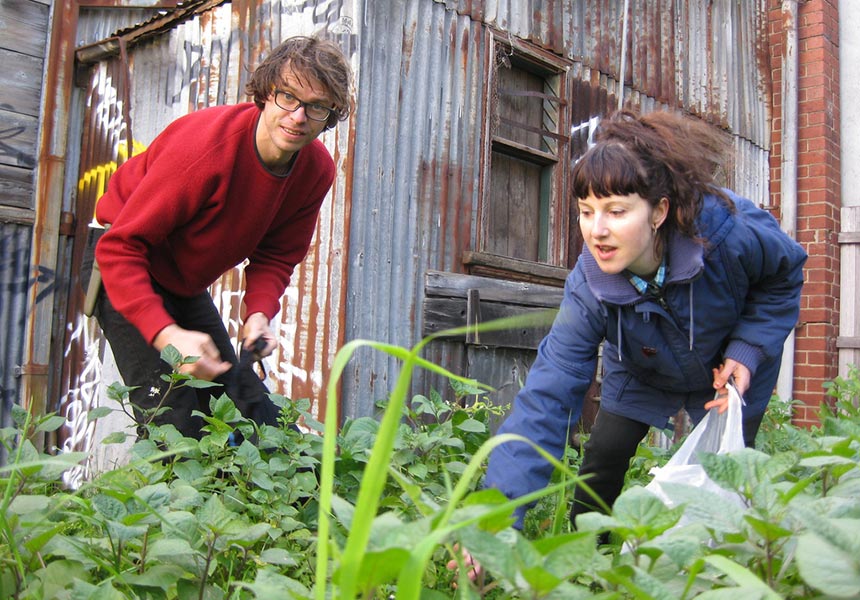 When Adam Grubb lost his wallet, he survived without cash for two months.

At the time, the Melbourne-based director of permaculture business Very Edible Gardens wasn’t paying rent and was on working on a garden in exchange for board and lodging.

“I must have paid my phone off with a credit left on my debit card, and everything else is remarkably easy,” he explains. “This society is flush with excess resources.”

Grubb, 39, and his wife Annie Raser-Rowland, 36, grow fruit, flowers and vegetables, buy clothes at opp shops, sew and do most of their home repairs.

They buy in bulk from organic food co-ops, forage for edible and medicinal plants and rescue food rejected by shops, such as fruit with spots on it that is otherwise fine.

They don’t have a car and instead ride bikes, use public transport and occasionally hitchhike.

“I live a life relatively free of distractions, one in which the sensual pleasures of ice cream, home-made cider or just a simple home-grown apricot are intensified because they’re not taken for granted,” Grubb said.

“Like many others who began living simply for environmental reasons, now I do it for the unsullied pleasures, and for the freedom.”

Grubb and Raser-Rowland are part of a growing international freeconomics movement that encourages people to barter goods and services, eschew unnecessary technology and consume less.

Barter systems have been around forever, but the internet has opened up a whole new world for those determined to live on the cheap and protect the environment.

The philosophy blossomed in 2010 when Irish activist Mark Boyle published The Moneyless Man: A Year of Freeconomic Living, which documented his attempt to live money-free for a year.

Boyle also founded the online community justfortheloveofit, which has merged with Streetbank, one of the world’s most successful neighbourhood sharing projects. Australia’s The Sharehood also merged under the Streetbank umbrella last year.

Streetbank members can sign up anywhere in the world and use the site to share goods, services and information, as well as re-homing unwanted items. Members lend garden tools, sports equipment and baby gear, offer skills in languages, DIY and IT and give away everything from furniture to DVDs to garden produce.

Last year, a group of Australian entrepreneurs ran a Streetbank marketing campaign in Sydney’s Bondi. UK-based Streetbank founder Sam Stephens was most impressed with the project.

“Their creativity was brilliant,” she said. “We’re excited about Streetbank’s potential to develop in Australia and can’t wait to see what happens over the coming year.”

Grubb is a Streetbank member but mainly uses his own informal exchange networks. On average he lives on less than $30 a day, about two-thirds of which goes towards rent and bills.

You can do it too

He and Raser-Rowland wrote The Weed Forager’s Handbook and are writing a book encouraging others to embrace frugality.

“In the past I’ve found situations where I’m not paying rent, and for the challenge of it have lived without money altogether,” Grubb said. “Currently, outside of rent, I spend about one fifth of the national per capita average.”

“We have a boarder, and we often work from home. We try to keep up good maintenance of the building, but have stuck to low key renovations, rather than large expensive ones.”

Grubb doesn’t buy the latest technology and minimises his use of electronic heating and cooling. “I just like the edge taken off the extremes, and we’ll just heat one room of the house, and hang out together,” he said.

Jewellery artist and environmentalist Cara Sandys, who has spent 30 years living between Australia and the UK as a dual citizen, is also a big freeconomy advocate.

Southampton-based Ms Sandys started a “books for free” shop in the UK two years ago. Books are donated and customers can help themselves.

Melbourne now has its own version, the Melbourne Central Little Library.

At 54, Ms Sandys has never owned a car or a computer – she goes to the library – and has not paid for the five bikes she has ridden, which have been given to her or rescued from the tip and refurbished.

“I’ve got legs so I’ll use them to walk or cycle, or use public transport,” she said.

Sandys shops at night when supermarkets have marked down short-dated items and finds most of her clothes at clothes swaps and charity shops.

Being so frugal has allowed her to buy and sell several properties, using the profits to supplement her income and to travel.

She says living this way helps to save money and the environment. Peoples’ expectations are also lower as they are getting something for nothing.

What do you think? Could you live on less? Would you hunt for edible weeds to cut your family food budget each week? Post your views in the comments field below.

Cara Sandys will be in Australia to talk at the Lexton Rainbow Serpent Festival on January 26, and at Melbourne’s Sustainable Living Festival on February 10 at the Port Phillip Eco Centre.

Freeconomics: Living on next to nothing is simple