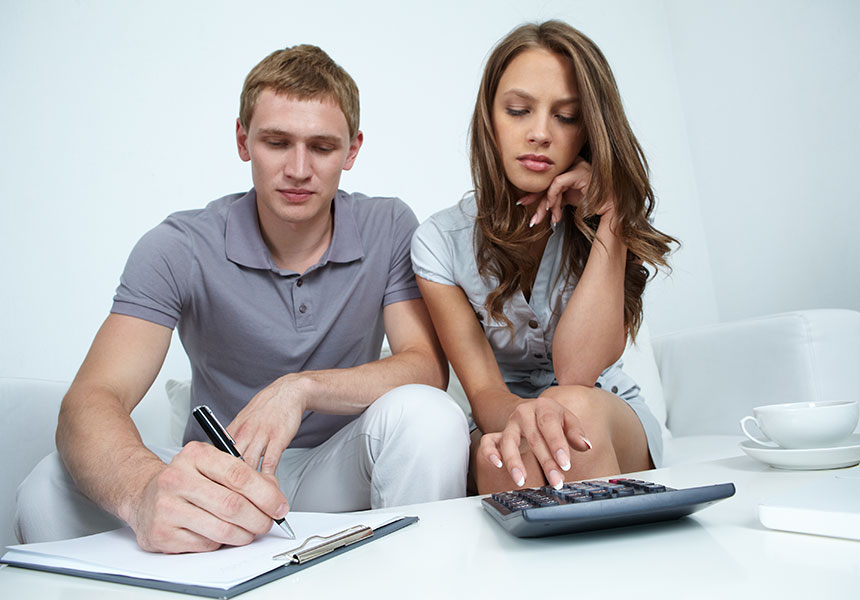 Ahhh … the new year. A time for new beginnings … to “look ahead” and set some resolutions.

You do that, right? Of course you do.

Everyone does, at least during the new year. As part of that process, you’ll probably start a new budget for 2014, or at least have in mind some financial goals. I don’t exactly know you, but I have a pretty good guess of how you’ll do it:

1. You’ll look back in your life and identify your usual incomes and expenses.

2. You deduct your expenses from your expected income.

3. Then you look into the future. You have a bunch of savings accounts, so what you’ll do is allocate your savings based on various factors. Most people have one for short-term goals, one for long-terms ones, investments, an emergency fund, a travel fund and what-not.

What most people don’t realise is that budgeting is an exercise in forecasting. You’re trying to tell what things will be like a year from now – and, at the risk of stating the obvious, forecasting is not easy. People who do it for a living often get it wrong, and people who don’t do it for a living – you know, people like you and me – well, we almost never get it right.

Here’s a personal example. I’ve got my budget from a few years ago opened right beside this document. In it, I wrote that I’d like to have saved $15,000 in that year. Let’s just say I didn’t even come close.

And it was for legitimate reasons. Isn’t it always?

My car needed repairs. My wife had to be hospitalised for a few days. We needed new carpets. And in my youthful wisdom, I thought that starting a business re-selling photo albums online with a 50 per cent mark-up when my supplier was only a click away was a million dollar idea.

The point is, you can’t foretell these things. It’s not compulsive shopping that keeps most people broke. It’s little things like these.

It’s a bit like this song from the move Up:

Emergency Funds To The Rescue?

Well, that’s where emergency funds come in, some of you savvy readers might say. You save a portion of your money for rainy days. That way, when unforeseen things like that happen, you don’t have to dip into your savings (or worse, go into debt).

That’s true, but here’s my question. What portion of your income should you put into your emergency funds? And should you cap it (at, say, $5000)? Remember, keeping your wealth as cash comes at a cost (inflation is just one, opportunity cost is another).

This is where the art of budgeting comes in. Personal finance is rarely as certain as bloggers make it out to be, but here are two things I’d like you to pay attention to:

It’s only human to be optimistic. Optimism is crucial to our well-being – it compels us to do things we wouldn’t otherwise do (like working at a start-up), but it also comes at a cost. It makes us delusional about our future.

To illustrate just how optimism affects our judgement, consider the case of the Sydney Opera House’s construction. It was estimated to cost $7 million to build, but it ended up costing more than $102 million … and was completed 10 years after its scheduled finish date. And these projections were made by some of the most expert project managers, architects and financial forecasters in the land.

The saddest thing about this is that the Sydney Opera House’s case, while extreme in scale, isn’t isolated. Projects, including redecorating your kitchen, often run over their anticipated costs and timeline.

If you plan to undertake some kind of project around your house, and all you did is add up all the cost that you expect to incur, then you’ll probably blow your budget. Instead, use what is called reference class forecasting – basically a fancy way of saying ‘find a similar project that has happened, and use that as a reference’. That is, if your neighbour recently redecorated her kitchen, you should consult with her before you start drilling.

If you’ve forecasted for your income to rise by 10 per cent or more – and you don’t know how to make it happen yet – you’re being unrealistic, seeing how the average annual salary rise in 2013 was only 3.5%.

If you think your rent is going to stagnate, or if you’ve assumed your mortgage interest rate is going to flatline, then you’re being too optimistic. No one can tell what will happen to these figures (despite all the economists in the media) but there’s a GOOD chance they will go up in a span of a year.

If you own your property, and you think everything’s smooth sailing from now on, well, I have some bad news for you. I can’t tell you how many times home buyers don’t consider repairs and maintenance in their calculations. The truth is, some experts recommend that you should budget at least one per cent of your home value for repairs – no matter how new or well-built your property is.

And your transportation costs (including car maintenance), medical, groceries, et cetera … guess what? They won’t stagnate.

2. Prepare For The Worst?

Oh, I know. I’ll just go back in my financial history, look for the lowest point of my life and budget for that. Then I’ll finally have peace of mind!

Not so fast Batman.

Corporations often do this and it’s called a “stress test”, but let me point out something: See, that lowest point you’re referring to, it’s lower that the previous lowest point of your life. Who’s to say your next low point won’t be lower than the previous one?

Now you might say it’s rare, in your financial history, for you to go back to the time you went six months without a job. But remember the 2008 financial crash – that was a rare event that killed many dreams.

The point is, you should prepare for an event that is just slightly worse than the lowest point of your life, no matter its probability. Just as your body didn’t just recover after an illness – it actually grows stronger, so should you strengthen your finances after a downturn.

Stuff that cash in a high yield savings account and forget about it.

Andre, an accounting graduate who hates crunching numbers, is part of the team at Pocketbook, an app that helps you manage your personal finances.
Follow Us

How you’re (almost certainly) messing up your budget