City offices are slowly refilling after the Omicron outbreak forced workers to bunker down and stay at home.

But employees have made it clear they have little interest in returning to the office full-time.

Survey findings from the Property Council of Australia this week show that offices have been steadily filling up since a sharp rise in COVID-19 cases at the end of 2021 saw occupancy fall below 10 per cent of pre-pandemic levels in Melbourne, Sydney and Canberra.

Since then, occupancy rates have steadily lifted across the east coast capitals, with Adelaide and Brisbane leading the charge.

But none are back to where they were before the pandemic – and separate research suggests employers face a difficult battle driving occupancy rates any higher.

A report by Deloitte and Swinburne University of Technology this week found four out of five workers (78 per cent) who can work flexibly want to work from home at least some of the time.

Deloitte Australia partner Natalie James, who worked on the report, described the work changes as “an employee-driven revolution”. 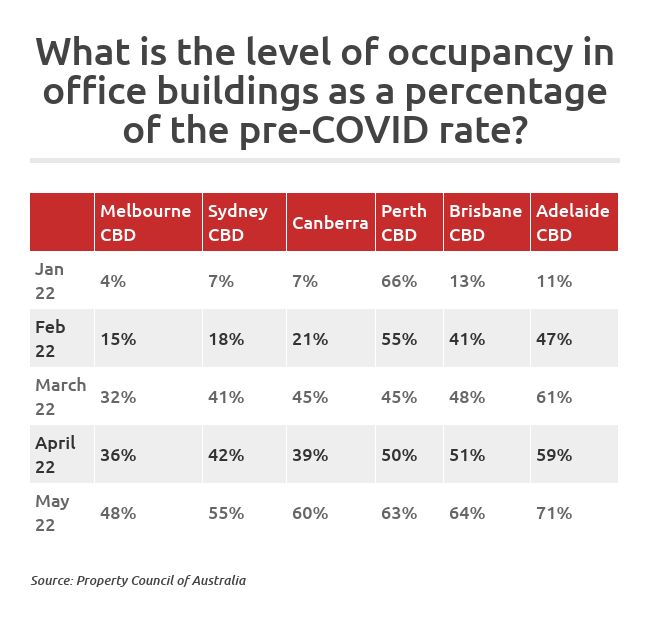 Gartner research and advisory vice-president Aaron McEwan said employees don’t want to work from offices “anywhere near as much” as they used to, if at all.

“But people don’t want to go into work every day, go through a difficult commute, to get into an office and then sit in a cubicle and do work that they could do from home.”

Mr McEwan said the only people lamenting the slow return to the office are property developers and company executives, most of whom are “50-plus-year-old males”.

On Thursday, Tesla CEO Elon Musk made headlines after a leaked email revealed he had ordered staff to return to the office full-time or be fired.

“Everyone at Tesla is required to spend a minimum of 40 hours in the office per week,” Mr Musk wrote.

“If you don’t show up, we will assume you have resigned.”

Mr McEwan said this kind of thinking shows a “really clear disconnect” between employees and bosses.

He told The New Daily employers come from a place of privilege, often having their own carpark, office, and easier access to child care and help with domestic chores at home – perks many employees lack.

“What [employees] realised is that it’s incredibly difficult to manage your life if you’re spending most of it at work, or in a commute,” he said.

Mr McEwan likened companies forcing employees to return to the office full-time to retailers in the early 2000s that refused to embrace internet shopping and relied solely on brick-and-mortar stores.

“If you’re going to be the company that forces people to come back to the office, you better have an incredible office experience,” he said.

‘Employee-driven revolution’: Workers reluctant to head back to the office