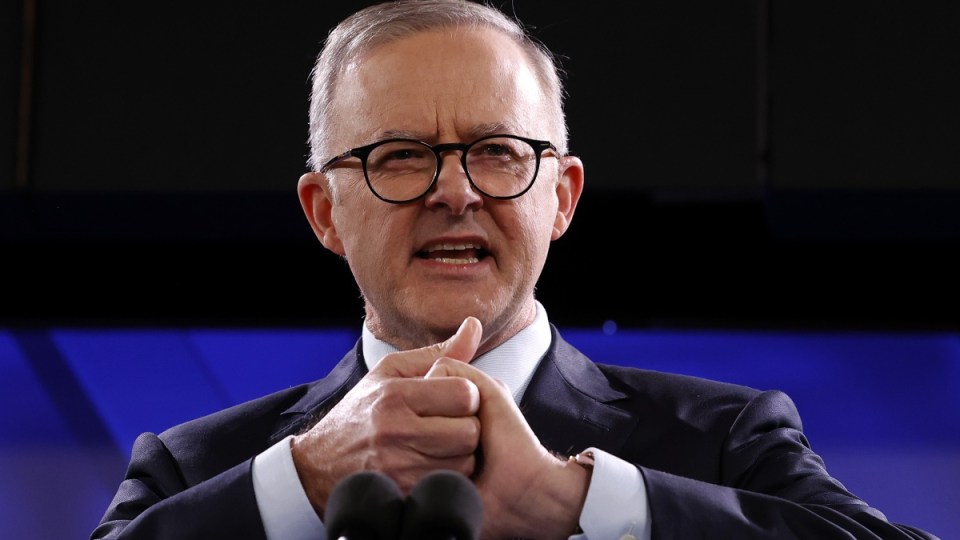 “What a hit. This delivers the biggest cut to real wages in more than 20 years,” he told the National Press Club on Wednesday after the Australian Bureau of Statistics released its quarterly wages data.

“Under Scott Morrison, real wages are plummeting while the costs of living are skyrocketing.”

“We wish him well on Saturday, as we do our speaker today,” NPC president Laura Tingle said as she introduced Mr Albanese.

Back on wages, the ABS data showed they lag well behind inflation, which is at 5.1 per cent. Annual growth to the end of March was just 2.4 per cent, according to the figures released on Wednesday.

Wages grew 0.7 per cent in the three months.

ABS head of prices statistics Michelle Marquardt said the annual wage growth had risen for each of the past five quarters from a low of 1.4 per cent in the December quarter of 2020.

However, there is likely to be further bad news for borrowers when the RBA holds its monthly board meeting in June. Economists are expecting at least a further 25 basis point increase in the cash rate.

It follows the first increase in a decade earlier this month as the central bank tries to bring inflation under control.

The latest figures add fuel to the cost of living crisis that has dominated the six-week federal election campaign, which draws to a close on Saturday.

On Wednesday, however, Prime Minister Scott Morrison again blamed it on inflation, which he said was outside control.

Unemployment figures due out on Thursday are expected to show a further fall in the jobless rate. Mr Morrison said low unemployment would lead to wage rises.

“But inflation is the challenge and that’s why when you’re dealing with things like that you’ve got to know the things you can’t control: global events, global forces, wars in Europe, disruptions of supply chains and the pandemic,” he said during a speech in Melbourne.

“Two years ago in particular, we were looking at unemployment hitting 15 per cent, and here we are in a situation where we’re about to see multigenerational lows when it comes to unemployment in this country, and that will continue to support sustainable increases in wages, but inflation is the challenge.

‘That’s why … you’ve got to know the things you can’t control, global events global forces, oil prices, wars in Europe, disruptions of supply chains and the pandemic shutdowns in China.”

Australians could not risk electing an opposition whose policies would drive up inflation, he said.

“A shadow treasurer who thinks you can just have a few billion dollars loosely spraying around and it’s no big deal, well, that is a big risk to you,” he said.

But Mr Albanese said Labor’s policies put productivity at the centre of increasing profits and wages without adding to inflation.

He said a Labor government would slash funding pools for community and regional grants schemes as part of its budget-repair strategy, if it wins Saturday’s election.

He pledged to cut uncommitted funding in the Community Development Grants Program by $350 million, and to return the $400 million Regionalisation Fund back into the budget.

Meanwhile, the wages figures showed workers would lose $4000 in 2022, the peak body for Australian unions said.

“Working Australians are being forced to cut back on even the most essential items,” Australian Council of Trade Unions secretary Sally McManus said.

“It is shameful that the Morrison government is refusing to support a $1 per hour for workers on the minimum wage.”

The Fair Work Commission is reviewing the minimum wage rate. Labor wants it to keep pace with the rate of inflation, while the Coalition has flagged alarm at a bigger than normal rise.

Labor will release its election policy costings on Thursday. Shadow treasurer Jim Chalmers said Mr Morrison was not being honest about what they would show.

“If this government spent as much time on their own budget as they spend making up stories about ours, then maybe they would have something to show for the trillion dollars in debt they’ve racked up in their budget heaving with rorts and waste,” he said.

The government’s costings, released on Tuesday, total $2.3 billion and will be paid for by increasing the public service efficiency dividend to two per cent, from 1.5 per cent. That saving will raise about an extra $1 billion for a total of $2.7 billion.

Nearly six million Australians have already cast their vote or applied for a postal vote.

Meanwhile, two new polls show the election race has tightened in the Coalition’s favour ahead of voting day on Saturday. Labor remains ahead on a two-party preferred basis.

A Resolve Strategic poll conducted for Nine newspapers showed Labor leads by 51 per cent to 49 per cent, compared to 54-46 two weeks ago.

An Essential poll published by The Guardian on Wednesday found Labor was on 48 per cent, compared to 46 per cent for the Coalition, against 49-45 a fortnight ago. The remainder of voters were undecided.