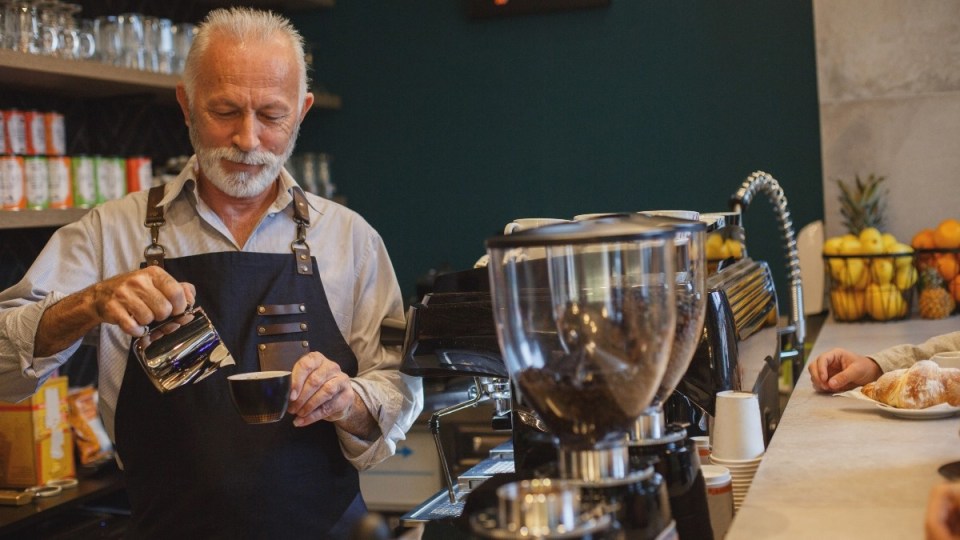 Older workers could help fix labour shortages in the hospitality industry, according to one economist. Photo: Getty

Walk down your local shopping strip and chances are you will see at least one help-wanted sign in a cafe or restaurant.

The students and backpackers who typically fill these roles are no longer in the country and most other workers already have jobs.

It’s a terrible combination for hospitality businesses struggling to put on enough staff as the sector booms following two years of lockdowns – and so one economist is suggesting they cast a wider net in their recruitment efforts.

Indeed APAC economist Callam Pickering said labour shortages are hitting cafes and restaurants particularly hard as two-thirds of the sector’s workforce are under 35 and the number of younger people in Australia has collapsed.

The local populations of 15-to-24-year-olds and 25-to-34-year-olds have shrunk by 5 per cent and 2.9 per cent respectively since the start of the pandemic.

And so Mr Pickering said hospitality recruiters might have more success if they “shift their focus toward older workers if they want to take advantage of surging demand”.

“An increase in international students and backpackers crossing Australia’s newly opened borders will add to the labour supply,” he said.

“But that’s hardly a near-term solution to hospitality’s recruitment challenge.”

Indeed analysis shows the number of restaurant job postings in March was 180 per cent higher than in February 2020, and the number of hospitality and tourism postings was up 104 per cent.

Hundreds of hospitality jobs waiting to be filled

He said the company was getting half a dozen new orders every day and had more than 100 jobs they could not fill.

And although businesses are offering salaries 10 to 15 per cent above pre-pandemic rates, Mr Bolton said he was struggling to entice new and past workers as the pandemic had encouraged many to place a greater emphasis on their work-life balance.

“Every fifth chef I ring is now working at Bunnings or somewhere else and doesn’t want to come back,” Mr Bolton said.

“People have realised now they can get the same pay [but] don’t have to work weekends, split shifts, long hours … that’s why a lot of people have left the industry in Australia.”

She added that the labour shortages gave the hospitality industry a “huge opportunity to recruit from more diverse pools”, including older workers and those currently outside the industry.

But Mr Pickering said the sector would have to play catchup.

“Retail and other sectors were snapping up workers while hospitality was still burdened by economic restrictions and closed borders,” he said.

“Raising wages and benefits is often an effective approach, but shifting the recruitment focus from youth toward older workers may also be necessary.”

Such a shift in hiring strategies may require a change in attitudes.

A 2021 Australian HR Institute report found that more than 46 per cent of human resources professionals and business leaders said their organisation would be reluctant to recruit workers over a certain age – with some saying their age barrier was as low as ‘over 35’ and others saying it was ‘over 70’.

But Ms Gamble said there’s “never been a better time” for people to enter the hospitality industry and previous hiring biases and preconceptions were not currently a barrier.

She said hospitality businesses traditionally looked for younger recruits since many roles were “fairly physical”, but noted that older workers sometimes have more stamina.

“Right now, people are taking on untrained workers – young and old – and paying to train them up,” she said.

But just because there are more opportunities for older workers doesn’t mean more of them are applying.

“We’re not seeing a trend in older workers applying, which would suggest that there isn’t that demand,” Ms Gamble said.

“Everyone is focusing on diversity, so employers are open to employing older workers and are being more flexible, but they aren’t being approached.”

PM confirms death of Australian who was providing humanitarian aid in Ukraine
‘Greenslide continues’ as party snatches seat of Brisbane from the Liberals
Drenched in her friend’s blood, 11-year-old survived Texas massacre by playing dead
Renewed Russian attacks threaten Ukraine’s last toehold in east
Fiji’s PM lauds Penny Wong – and takes a subtle swipe at Morrison
‘No excuse’: Texas safety boss says police made the ‘wrong decision’ at school shooting
Boost your pay by 10 per cent? One step could be all it takes
Today's Stories