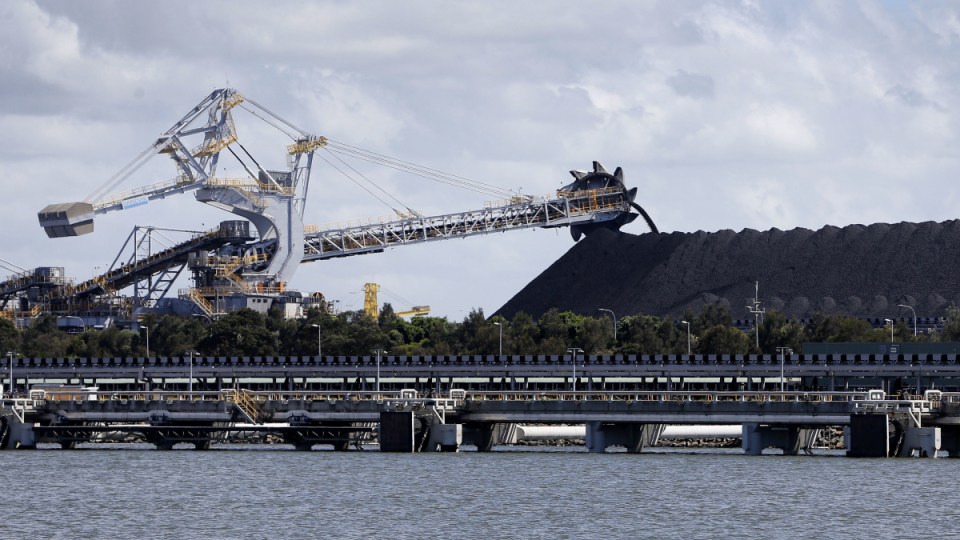 Coal stockpile and reclaimer at Kooragang Coal Loader in the Port of Newcastle. Photo: AAP

Australia will lose hundreds of thousands of jobs, mostly in a handful of regions, if it fails to make the changes required by our emissions-busting trading partners, a report warns.

The independent Centre for Policy Development on Monday released detailed modelling on the impact of locked-in and likely commitments for net zero carbon emissions by 2050.

Without active planning for a transition, the national impact on jobs is modest at just two per cent of the national labour force but painful in some communities, researchers Toby Phillips and Warwick Smith found.

Up to 300,000 jobs and over $150 billion in output would be in jeopardy if Australia faced the predicted 2050 levels of demand for fossil fuels today, according to the report.

But only seven local government areas out of 537 would have more than 20 per cent of their workforce affected.

“It will not crash the whole economy, but there are a handful of local government areas, half a dozen or so, which will be profoundly affected,” the economist said.

“This is where we must focus.”

The most affected communities would be Isaac and Central Highlands in Queensland’s Bowen Basin, and Singleton in the NSW Upper Hunter region in NSW, and the Pilbara in Western Australia if policymakers don’t shift gear.

“Shutting down a mine does not just affect the miners, it also affects the local pub and the retail stores in the nearest towns,” the report said.

Isaac is most exposed community

Isaac is the nation’s most exposed community with the greatest proportion of workers in jobs that are dependent on world demand for coal.

About two-thirds of the Bowen Basin’s coal is coking coal, which will make the demand decline less abrupt than it will be in the Hunter Valley, but that has does little for the longer-term outcomes.

The port of Newcastle services more than 40 coal mines across the broader Hunter Region and is the world’s largest coal export port with over 150 million tonnes exported each year.

In all scenarios, demand for coal will plunge.

Demand for coal and gas fare differently under the three scenarios, continuing to rise over the next decade if they are used as “transition fuels”.

Pilbara affected because of gas exports

Under scenarios of faster decarbonisation by our trading partners, Ashburton in Western Australia’s Pilbara region is also affected because of its gas exports.

Based on more certainty – at least globally – on the agreed pace of cutting emissions, the report recommends a plan for new jobs in key regions to replace those lost in fossil fuel industries.

The Latrobe Valley in Victoria does not feature despite its high concentration of coal mines and power plants, because of the transitions that have already taken place for some workers.

Also, much of the region’s coal is used in Australia and the report only models international exposure.

“In reality, this region will likely be as affected as well, as Australia’s own energy mix and fuel demand profile evolves,” the researchers said.

Iron ore exports are forecast to remain strong, largely unaffected by international decarbonisation, which should buffer the WA’s Pilbara and Perth headquarters.