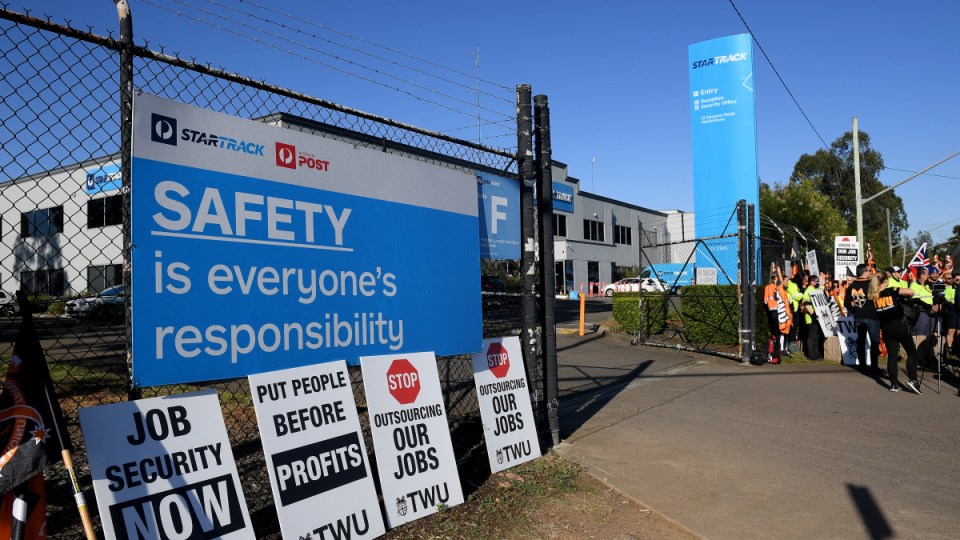 Up to 2000 workers at StarTrack have walked off the job in a dispute over pay and conditions. Photo: AAP

Delivery workers from Australia Post-owned parcel delivery service StarTrack are striking for the second time in a month, trying to force their employers back to negotiations in a pay and conditions dispute.

Australians are already facing longer than usual wait times for deliveries, with the sector buckling under the pressure caused by a spike in online shopping amid months of lockdown

Transport Workers’ Union national secretary Michael Kaine said there was anger, disappointment and confusion after StarTrack “walked away from negotiations” despite “promising progress”.

Up to 2000 StarTrack workers walked off the job at midnight on Wednesday, potentially delaying tens of thousands of parcels, a week after the company was given an ultimatum to wrap up negotiations.

But StarTrack spokeswoman Michelle Skehan said the union “continues to move the goalposts”.

“First it claimed it was about job security, and with a largely agreed approach there, it now claims it’s about pay,” she said in a statement.

“This is despite repeated public statements from TWU officials that this is not a wages dispute.”

StarTrack was an essential service and could not capitulate to a national campaign focused on union politics, she said.

She encouraged workers to “look at the facts and not the rhetoric and accept our very fair and longer term offer”.

It is understood the union believes StarTrack has been deliberately delaying negotiations.

StarTrack has made contingency plans but warned regional communities would bear the brunt of delayed services.

Workers from FedEx could also strike on Monday, with union members giving the company until the end of the week to reach a resolution.

Discussions on new enterprise agreements at each company have gone on for more than six months.

The TWU is pushing for members to get better job security, with limits on the use of outsourcing to cheaper contracted labour.

StarTrack “has already met … and in many ways exceeds” the requirements of the TWU’s requests, Ms Skehan said.

There have also been other recent strikes at StarTrack and FedEx.

“As December looms, StarTrack expects workers to step up for an enormous Christmas period without certainty over their jobs, pay or conditions,” Mr Kaine said in a statement.

A spokeswoman for FedEx said it had tabled an offer that improved employee entitlements and pay, and addressed job security concerns.

“Given how close we are to a resolution and our willingness to come to the table with solutions, an industrial action seems unnecessary at this stage,” she said.

Parcel delivery drivers in second strike in a month