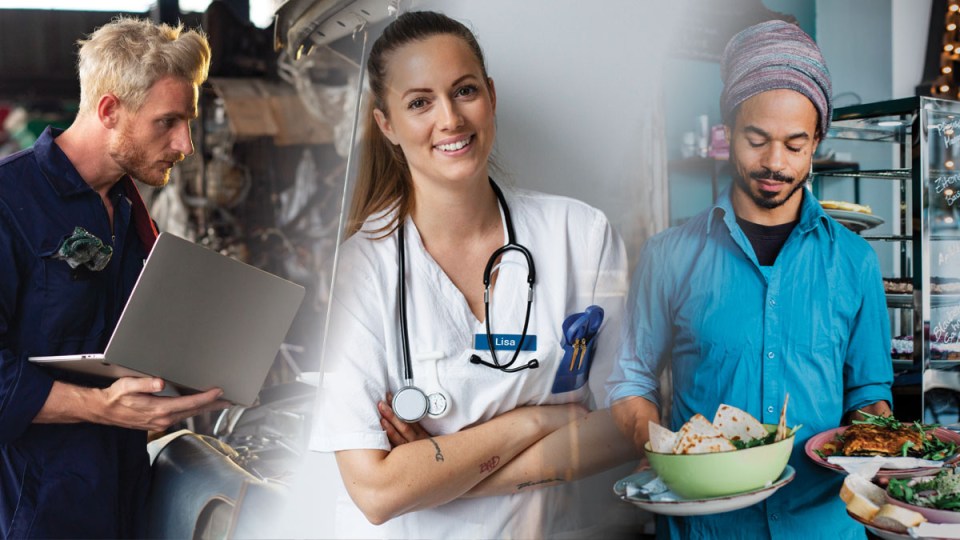 Health care and hospitality are among the sectors most in demand in Australia's coronavirus recovery. Photo: Getty

But concern continues to grow over how the imminent end of JobKeeper could affect unemployment and underemployment rates, with most of the recovery driven by part-time and casual jobs.

On Tuesday, ANZ reported the number of roles advertised on online jobs portals rose 9.2 per cent over December to more than 159,000.

Number of positions are now double what was seen at the height of the pandemic in April and advertisements have hit an 18-month high with a 4.1 per cent bump above February 2020 figures.

However, the latest uptick largely pre-dates the coronavirus outbreaks in Sydney’s Northern Beaches and Melbourne.

But there was uncertainty over how JobKeeper’s end would affect hiring rates, she said.

“The end of JobKeeper in March is a key risk. We also expect to see some trade-off between unemployment and underemployment,” Ms Birch said.

“The current spike in COVID cases is a risk as well, particularly if restrictions tighten.”

That concern comes as businesses and the federal Opposition continue to pressure the government to offer targeted support beyond JobKeeper’s March deadline.

Those include the beleaguered travel sector, which is expected to lose up to $3 billion in revenue due to the Northern Beaches outbreak (that figure was compiled before Melbourne’s border closure).

“Many business owners are seeing holiday bookings cancelled or empty tables in their cafes and restaurants at what is usually their busiest time of year,” Senator Gallagher said.

AMP Capital chief economist Dr Shane Oliver said although the figures broadly were positive, inner-city hospitality venues lagged behind in the jobs recovery as workers reaped the benefits of working from home.

He also said bars and nightclubs were still subject to strict social distancing requirements, as well as the higher education and travel sectors, where jobs are unlikely to return over the short term.

But Dr Oliver did predict hiring rates continuing to be supported by pent-up spending demand and JobKeeper payments before the recovery decelerates in the second half of 2021.

“We still seeing a lot of stimulus being pumped into the economy which is supporting spending and a lot of that is contained in the local economy. It’s not like Australians can get on a plane and head overseas,” Dr Oliver told The New Daily.

“But we have to be cautious, because even though job vacancies may be coming back, underemployment remains very high, and that’s an element that will take a lot longer to recover.”

As The New Daily reported in December, part-time employment is above pre-pandemic levels. There were 28,000 more jobs in November compared to the same time in 2019.

Meanwhile, there were 110,000 fewer full-time jobs in the economy.

Angela Jackson, lead economist at Equity Economics, agreed sectors such as education and tourism would need to be targeted in any possible extension of JobKeeper to dampen job losses.

“I think just having the surety of a scheme like JobKeeper there that they know that if things do go south quickly, the government will help with the payroll and that’s quite important to weather that level of uncertainty,” Ms Jackson told The New Daily.

She said the additional spending power provided by the scheme largely supported retail, while jobs in high-demand sectors including health and social care increased through the pandemic.

Figures provided to The New Daily by jobs portal SEEK showed advertised roles in medical and health care rose 13 per cent in December, and were up 34.5 per cent year on year in November.

That report noted some of the most in-demand roles included wait staff, labourers, physiotherapists, nurses and kitchen hands.

Meanwhile, the number of advertised hospitality and tourism roles over December rose 44 per cent, trades and services jobs grew 36 per cent, manufacturing, transport and logistics vacancies jumped 31 per cent and community services and development increased by two-fifths.

Managing director of SEEK ANZ Kendra Banks said in December that businesses – particularly in hospitality and tourism – delayed their hiring plans until they had certainty over whether they would operate in a ‘COVID-normal summer’.

And much of the new hiring activity included smaller firms rehiring team members, she said.

Job ads are now above pre-pandemic levels. Here’s who is getting hired and where to look