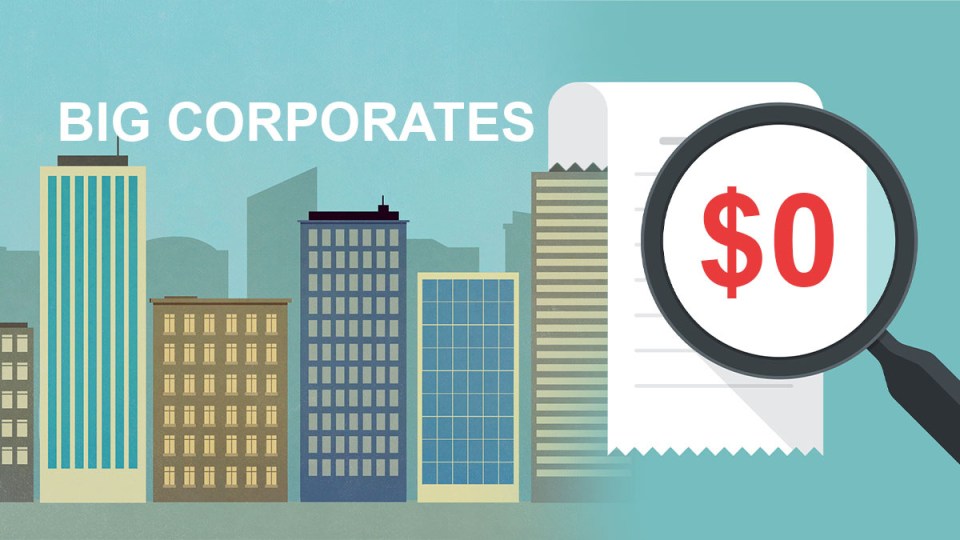 Dozens of big corporates have paid no tax in Australia for six years. Photo: TND

Major fossil fuel companies are overrepresented among the ranks of big businesses who have paid zero corporate tax for six years, according to Australian Tax Office data.

The ATO said some of those companies fall into larger corporations that do pay tax, which, if taken into account, bring the total non-tax paying cohort down to 22 per cent (449 businesses).

But Dan Gocher, director of climate and environment at the Australasian Centre for Corporate Responsibility, said major oil, gas and coal companies are serial offenders in not paying tax.

And with hundreds of billions of tax credits in reserve after constructing major gas platforms in Western Australia, the Northern Territory and Queensland, it is likely they will avoid paying tax for years to come.

Mr Gocher, who has analysed the ATO data over its six-year lifespan, said seven fossil fuel companies ranked in the 20 highest profit-earning companies that have paid no tax between 2013-14 and 2018-19.

Among those include the aforementioned oil and gas producers, Peabody Australia, Australia Pacific LNG, BG International (the parent company of Shell), Yancoal and Puma Energy (Australia).

Those companies had a combined six-year revenue of $171.82 billion.

Mr Gocher said it was “extraordinary” that gas firms and coal companies consistently slashed their tax bills to zero despite recording billions in revenue.

Although he acknowledged some of the companies had built a number of gas terminals and coal mines over the past decade – which initially incur high capital costs – he said it “beggars belief” the companies could not be profitable in a robust economy.

“Prior to COVID, Australia had [more than] 25 years of consistent economic growth – so it begs the question, if these repeat offenders weren’t profitable then, when will they be?” Mr Gocher told The New Daily.

“Even if they cite the writing down of assets, Exxon had minor interest in the development of LNG terminals in Australia recently, they’re not like an Origin or Santos, so it’s almost inexplicable.

And the other argument you’ll hear is that they’re not super profitable when commodity prices are low, but there have been periods when oil prices were quite high and coal prices were up until this year.”

Further analysis of the ATO data found Ford and General Motors Holden paid no tax, with a collective revenue of $29.37 billion.

ATO deputy commissioner Rebecca Saint said the oil, gas, manufacturing and construction sectors’ “high representation” on the list can be partly explained by the lifecycle of their business and their hefty investments.

“It could be they’re not actually making profits due to the business cycle, and you see that with oil and gas companies when they need to construct assets in a building phase,” Ms Saint told The New Daily.

“As they start those projects and commence to make revenue, they will be able to carry forward losses from earlier years to offset revenue in those later years.”

That’s an increase of $3.9 billion on the previous year, and encompasses more than 60 per cent of all corporate tax paid in 2018-19.

And although the number of billion-dollar earning companies not paying tax looks high, the numbers are consistent with previous years, she said.

The ‘Google Tax’ has come into play

The ATO report also confirmed it has started using powers granted to it by former treasurer Joe Hockey, which allow it to pursue companies that made strident efforts to divert corporate profits to offshore tax havens.

Firms could be hit with a 40 per cent Diverted Profits Tax (DPT) – known as the ‘Google Tax’ – and fall foul of Multinational Anti-Avoidance Law if they were found to be dodging their Australian tax obligations.

Ms Saint said some DPT disputes over migration of intellectual property, royalty-free imported supplies and “bifurcated hubs” had escalated, with the ATO considering issuing a tax assessment in one case.

With some multinationals estimated to be contributing roughly $5000 per person to the Australian economy every year, he told The New Daily there was a better argument for only taxing their excess profits, rather than normal profits.

“I don’t think our corporate tax system does a good job for tech and innovative industries as the high rate is probably a disincentive for investment into Australia,” Professor Breunig told The New Daily.

“And remember, corporates are paying other taxes through collecting and remitting GST, payroll taxes, income taxes and on dividends.”

He said there’s a “clear issue” of multinationals apportioning profits to countries such as Bermuda or Ireland.

And with local firms expected to take advantage of corporate tax assistance through the COVID-19 recession, he said there’s a strong argument for further tightening of the corporate tax system.

“There’s clearly some managing of the accounting books where they can manipulate it to not pay any tax at all, and right now, we have huge demand on public sector spending,” Mr Koukoulas told The New Daily.

“And if the electorate wants the government to provide good health care, education, roads, defence et cetera, someone has to pay for it, and right now, the burden doesn’t appear to be weighing on corporates.”