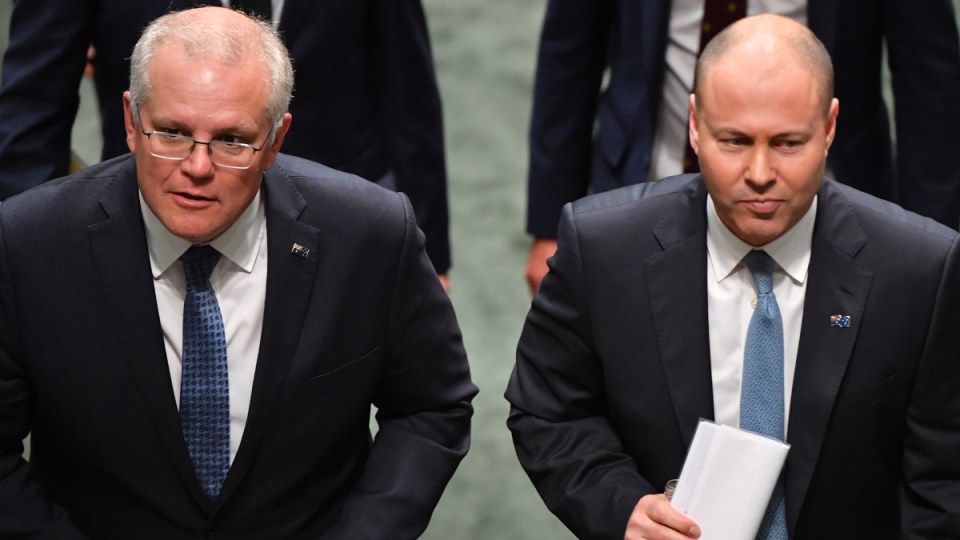 The Federal Budget has condemned Australia to a slower than necessary recovery, economists have warned.

Jobs should have come back much faster during the pandemic than previous recessions, but economists say they will take much longer because a lack of government support.

Less than two weeks after the Treasurer handed down a business-friendly budget, the Grattan Institute has published research showing it will take longer for unemployed Australians to find new jobs during this recession than most in Australian history.

Given the economy has suffered its worst shock in almost 90 years, that may sound unsurprising to some.

But economists at the Grattan Institute argue the recovery from the coronavirus recession should have been much faster, because unlike other shocks it was not preceded by a financial meltdown or a wave of bankruptcies, but by government restrictions.

“In most recessions the government isn’t able to switch things back on.”

But a lack of job-creation measures in the Budget, they warn, have condemned us to a slower than necessary recovery. 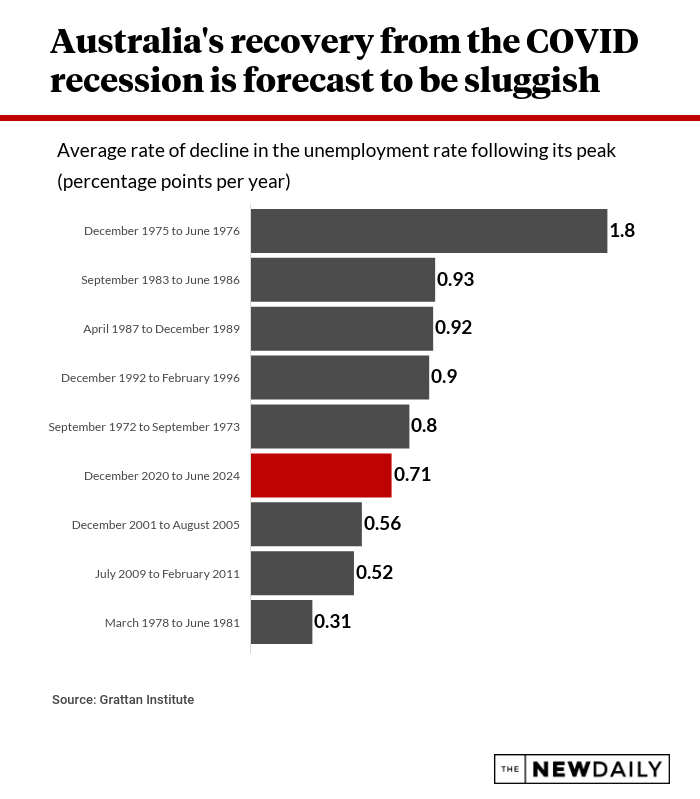 Their analysis is based on official forecasts included in the Budget. It shows the government expects the unemployment rate to peak at 8 per cent in December this year – Deloitte says 8.4 per cent – before taking three and a half years to fall to 5.5 per cent by mid-2024.

And our expected recovery compares unfavourably to the last 150 recessions experienced in OECD countries, where the unemployment rate typically fell by 0.85 percentage points a year.

As the International Monetary Fund warned leaders not to do last week, the government is withdrawing support too soon.

“And the stimulus is made up of measures not particularly likely to create jobs, such as income tax cuts (where much of the money is likely to be saved rather than spent) and transport infrastructure, which creates fewer jobs per dollar spent than services such as child care, health and aged care,” Mr Coates and Mr Cowgill write.

“We shouldn’t be content with a recovery that putters along at a below-average pace.” 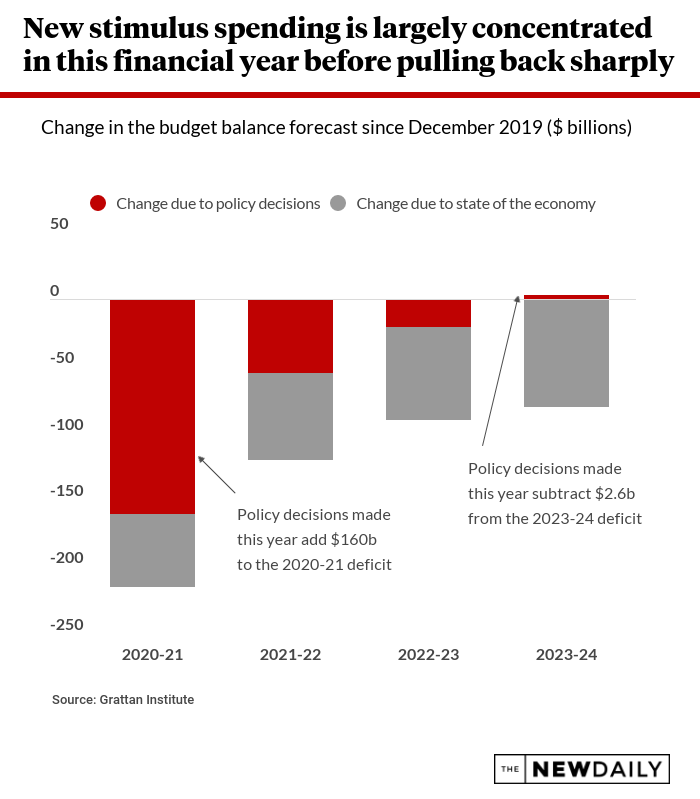 The Grattan Institute says an extra $50 billion of economic stimulus “over and above what was announced in the budget” is needed over the next two years to drive down the jobless rate to 5 per cent.

Some of that support may come via the states, they said, “but there’s no doubt the Treasurer has more work left to do”.

In a significant reversal of entrenched Liberal Party priorities, Treasurer Josh Frydenberg said before the Budget that the government would only cut spending and pursue a budget surplus once unemployment was “comfortably below” 6 per cent.

But Grattan’s economists argued in a separate piece that Mr Frydenberg had set himself too low a target.

According to this author’s interpretation of the latest ABS labour force data, the difference between 6 per cent and 5 per cent unemployment is about another 136,000 people waiting outside Centrelink.

And, as Deloitte Access Economics points out, that’s bad news for people lucky enough to keep their jobs as well – because it means weaker bargaining power for workers and therefore lower pay rises. 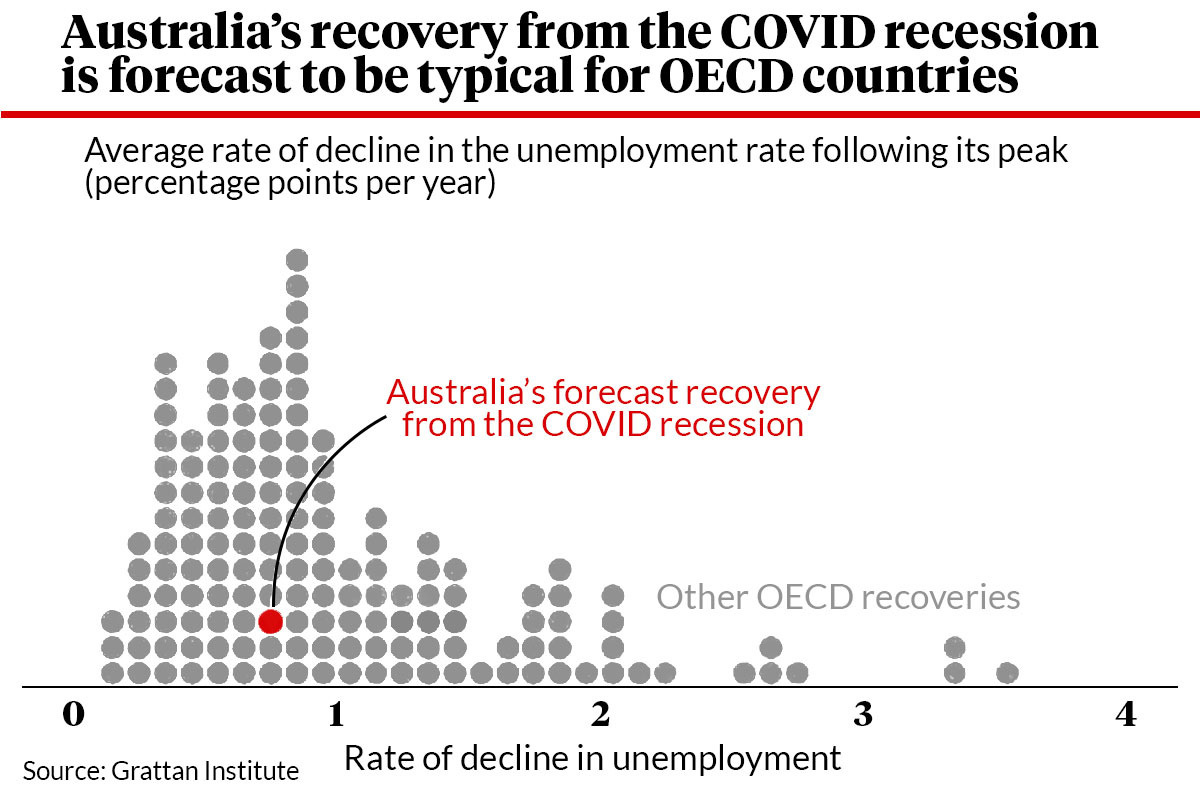 In a report released on Monday, Deloitte released forecasts showing wages growing slower than inflation in 2021 – meaning workers would take home less pay in real terms – and unemployment staying above 6 per cent until at least 2024.

And that’s assuming a vaccine arrives sometime next year.

Shadow treasurer Jim Chalmers seized on the report on Monday morning to attack the government for reducing the rate of JobKeeper.

“It beggars belief that the Morrison Government has cut JobKeeper in the middle of a deep and damaging recession, at a time when unemployment is rising and the Government expects another 160,000 Australians to be unemployed by Christmas,” Dr Chalmers said in a statement.

“Decisions taken by the Liberals in their Budget mean that the Morrison Recession will be deeper and longer than necessary.”

Economists say more will suffer for lack of government support