Just a few short months ago it was common for peak-hour trams departing Melbourne’s CBD to be so packed with passengers that some commuters would be forced to wait for the next tram, or the one after that.

Securing a standing spot without finding your face in a stranger’s armpit was difficult enough, and the idea of keeping 1.5 metres away from your fellow commuters simply laughable.

Since then, COVID-19 has upended our lives, and the term “social distancing” has become a common phrase in our collective vocabulary.

Working from home has become the new normal for millions of Australians, and it has profound implications for the future.

Research from the University of Sydney has shed light on how drastically our work and commuting habits have changed, and what sort of transport infrastructure will be needed post-pandemic.

Unsurprisingly it’s Victoria, where the nation’s strictest coronavirus lockdown orders are in place, that has the largest proportion of people working from home, according to preliminary survey findings released by the Institute of Transport and Logistics Studies (ITLS) this week.

The data was collated as part of an ongoing project monitoring the effects of the coronavirus pandemic, and was based on a national sample of more than 1000 respondents.

About 52 per cent of the days worked by Victorians in the first week of September were done from home, the survey found.

New South Wales and Tasmania had the second and third highest proportion of people working from home this month, at 40 per cent and 38 per cent respectively. 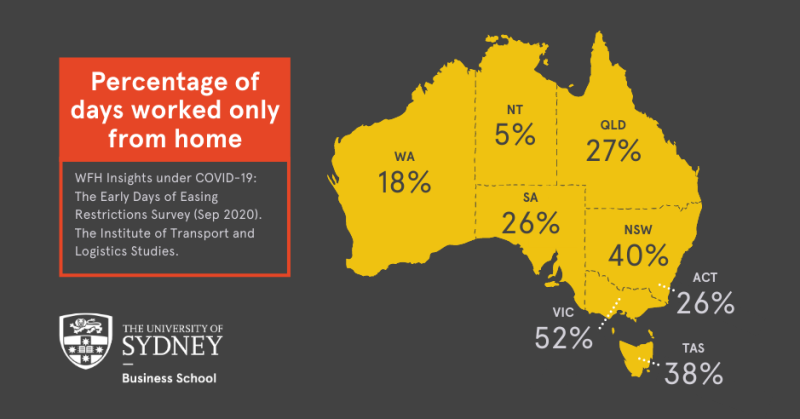 In Queensland 27 per cent of the days worked were done from home this month while an average of 26 per cent of days were worked at home in South Australia and the Australian Capital Territory, 18 per cent in Western Australia, and just 5 per cent in the Northern Territory.

But while working from home suits many white-collar workers, it’s out of the question for others.

On average, about 40 per cent of days worked by managers and professionals were completed at home compared to only 9 per cent of labourers and 16 per cent of technicians and tradespeople, the ITLS survey found.

“Generally, both employees themselves but also employers have found productivity to be approximately the same with working from home as working from the office,” Dr Beck said.

It is now clear that post-pandemic many Australians “would prefer to work from home more often than they did before COVID-19”, he said.

The pandemic-induced shift to flexible working has also had the side effect of relieving pressure on road and public transport infrastructure.

“If we continue to see increased working from home, then the current infrastructure that we have will be more than sufficient to handle the load,” Dr Beck said.

In NSW there has been “clear messaging and information provided on public transport about social distancing”, and efforts to stagger working hours so as not to crowd the network, he said.

“Victoria needs to be looking at the lessons that other states have learned, and how they can help manage demand for public transport services.”

As Australia charts a course out of the pandemic, governments must invest in transport infrastructure that “will relieve the burden on current infrastructure, and will create jobs at the same time”, Dr Beck said.

This should include funding projects that support improved freight and logistics, he said, “given the change in demand in this sector” since the pandemic began.

Coronavirus: How the working from home revolution will reshape Australia