Subscribe direct to our news source →
Finance Work Why the official unemployment statistics only tell half the story 6:00am, Aug 14, 2020 Updated: 4:43pm, Oct 1

Why the official unemployment statistics only tell half the story

The official unemployment rate has risen to its highest level since November 1998, but economists say it bears little resemblance to reality and more stimulus is crucial.

The Australian Bureau of Statistics only counts people as unemployed if they are out of work, available to work, and actively looking for work.

So even though 115,000 jobs were created in July, the unemployment rate rose from 7.4 per cent to 7.5 per cent as the rise in employment was outweighed by more people looking for jobs.

The headline rate suggested the jobs market had deteriorated in July when it had actually improved, with market research company Roy Morgan finding unemployment fell by 262,000 people over the month.

But the deception goes both ways.

The definitions used by the ABS have also hidden the true extent of unemployment since the pandemic began.

Employment fell by 556,800 positions between March and July, but official unemployment only rose by 290,800 people as many people who lost their jobs didn’t immediately look for a replacement.

“[So] while the unemployment rate officially increased to 7.5 per cent in July, the reality is somewhat different,” Indeed APAC economist Callam Pickering said.

If we treat everyone who lost their job as becoming unemployed, then the actual unemployment rate is 9.1 per cent, having improved considerably from 11.6 per cent in May.”

And the gap between statistical and actual unemployment isn’t the only way that the ABS figures diverge from reality.

The data describes the state of the labour market between June 28 and July 11, but Stage 3 restrictions were only reintroduced in Melbourne on July 8.

Commonwealth Bank head of Australian economics Gareth Aird said this meant people stood down during the second lockdown in Victoria would still be counted as employed in July’s employment figures, as “the ABS classifies a person as employed if they were stood down but had been paid for some part of the previous four weeks”. 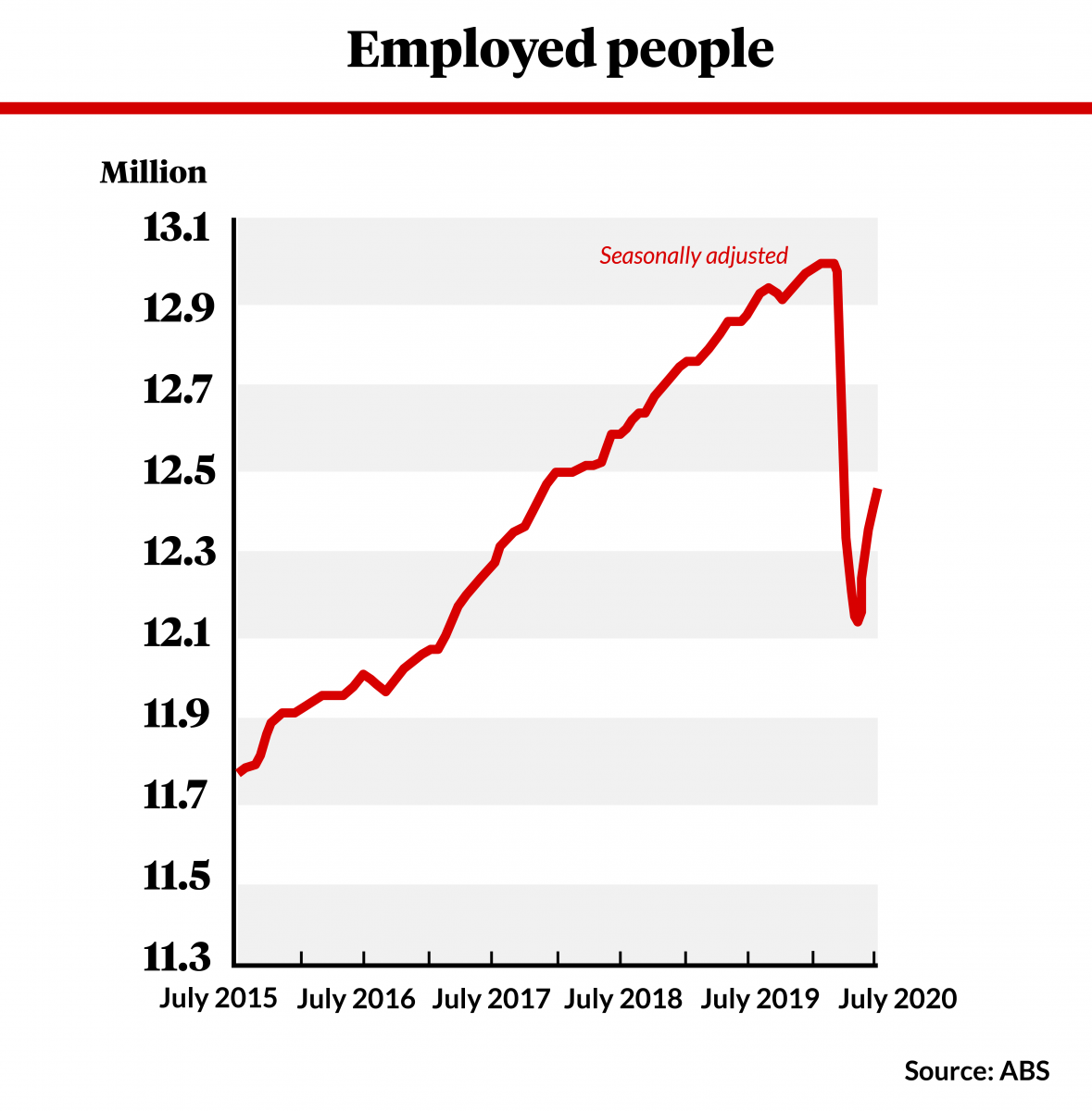 “Anyone stood down in Victoria due to the reimposition of Stage 3 restrictions will almost certainly have been paid for some part of the previous four weeks relative to the reference weeks. Therefore the ABS will consider them employed in July,” Mr Aird said before the figures were released.

So, not only does the headline unemployment rate suggest the labour market deteriorated in July when it likely improved, it also fails to capture the full impact of the tougher lockdown in Melbourne. 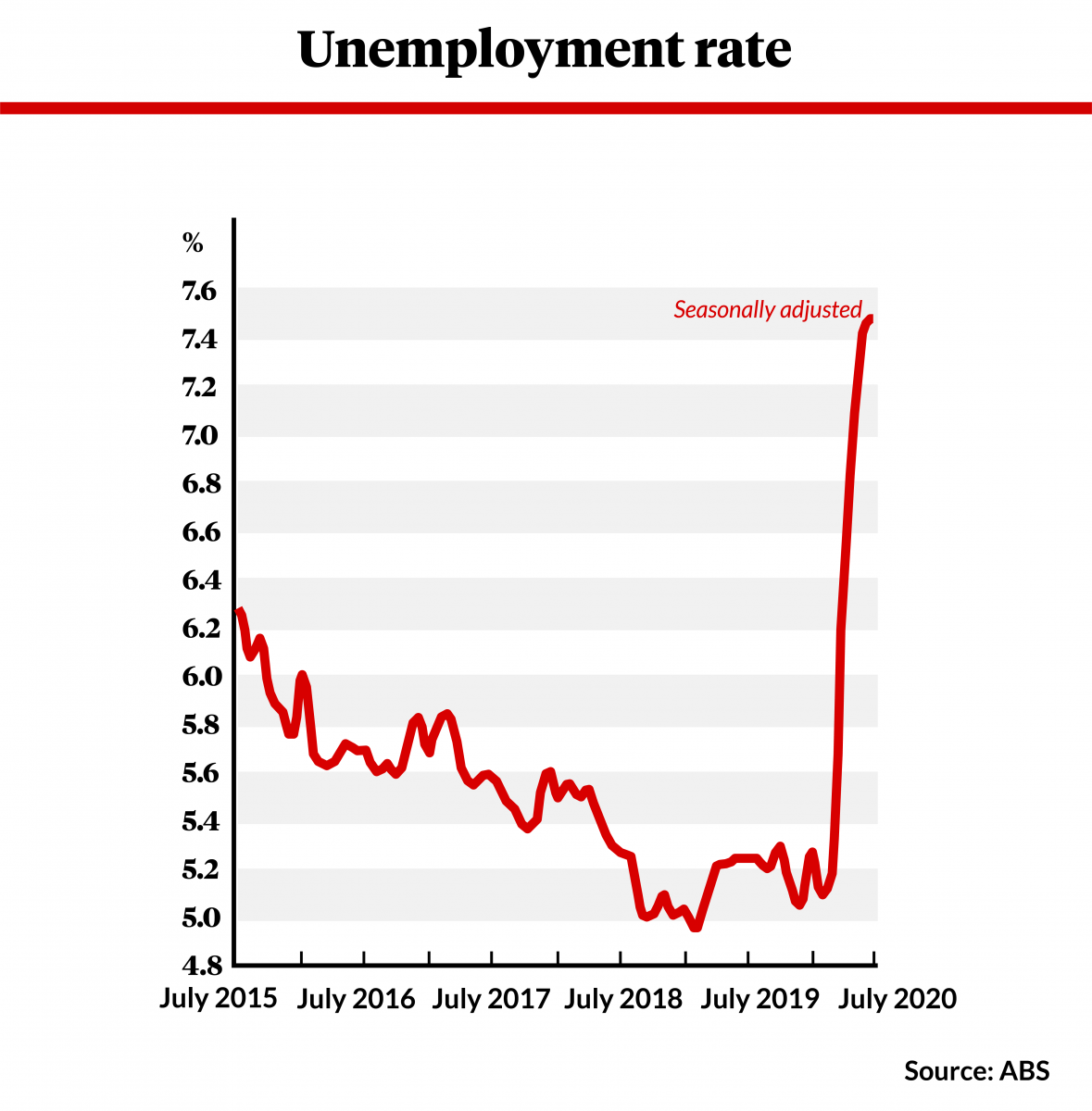 Grattan Institute household finances program director Brendan Coates said the federal government would inevitably have to announce more stimulus to lift the economy out of recession.

A previous report by the think tank estimated an extra $70 billion to $90 billion was required to bring unemployment below 5 per cent by mid-2022.

But now that a quarter of the national economy in Victoria has suffered such a major setback, Mr Coates said that that figure had risen to above $100 billion.

And independent economist Saul Eslake made a similar point last week – telling The New Daily that more stimulus was a given and only the type of spending required was up for debate.

The Treasurer was right in saying tax cuts would put more money into people’s pockets, he said, but targeted cash handouts, infrastructure spending, and social housing projects would stimulate the economy more effectively, as the money would be spent rather than saved.

Why the official unemployment statistics only tell half the story