TAFEs create more than $16 in value for every dollar they cost to run, new research claims.

Annual costs of $5.7 billion return economic benefits worth $92.5 billion (4.5 per cent of GDP), as investment in the sector creates tens of thousands of jobs and alumni earn much higher wages.

In a new report released on Thursday, the Australia Institute’s Centre for Future Work argues that despite chronic underfunding in recent years, the TAFE system continues to provide enormous benefits to the Australian economy.

It provides jobs for 48,000 people and boosts the wages of alumni by 39 per cent, compared to workers with no post-school education.

But unless more funding is made available, TAFE will struggle to perform its crucial role of helping hundreds of thousands of workers gain the skills necessary to thrive in the post-coronavirus economy.

We think TAFE is a critical part of that policy approach.”

The report estimates that TAFE generates more than $6 billion in direct economic activity every year, through employment, purchases made across its supply chain, and flow-on effects to consumer spending.

But the real value is found in TAFE’s impact on productivity. Total annual benefits in this area total some $84.9 billion.

This is based on the report’s estimation that TAFE adds $49.3 billion a year to workers’ earnings and $35.6 billion a year to business profits by boosting the productivity of our workforce – benefits that lead to $25 billion in higher taxation revenue. 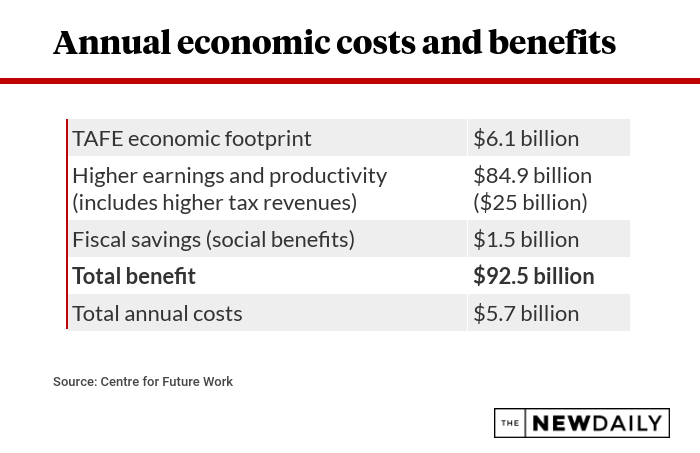 “And the final stream of economic benefit is the fiscal savings,” Ms Pennington said.

The think tank says the TAFE system reduces the federal government’s welfare bill by $1.5 billion a year, as gaining a post-school qualification lowers unemployment and improves overall health and wellbeing.

What government must do next

Released just one month after the Coalition announced it would invest $500 million into vocational education courses as part of its JobTrainer package, the report says the government must increase this investment to $2 billion annually.

It says this should be used to provide free TAFE courses in priority areas for 300,000 students a year, building on similar initiatives already launched in New South Wales and Victoria. 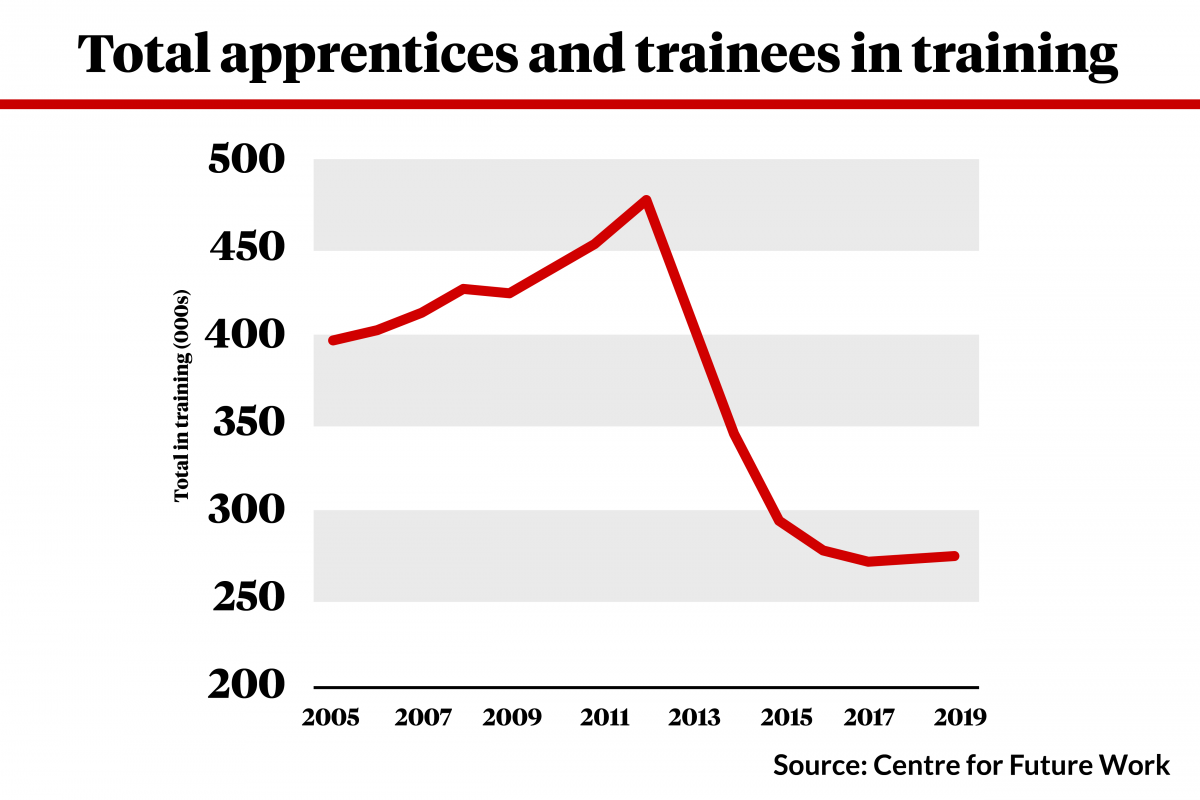 The government claims its $500 million VET funding offer – which is contingent on states tipping in an extra $500 million each and signing up to a national agreement – will help 341,000 Australians enrol into short and long courses provided free of charge.

But Ms Pennington is worried the scheme will favour private providers over TAFE institutes and be used to attack the states’ provision of free TAFE courses during the pandemic – with Western Australia the only state yet to sign up to the scheme.

“I think JobTrainer is going to be weaponised to undermine state-level responses to invest in their TAFE systems,” Ms Pennington said.

“Because it’s a provision of $500 million in Commonwealth funding, only on the condition that, first of all, states match that funding, but also that they sign up to a national agreement on the expansion of a VET training market.

“We don’t have all the details of what that agreement is … but we can pretty much bet that that’s going to be an expansion of the existing private training market.”

The Centre for Future Work also calls on policymakers to reverse years of industry privatisation by allocating at least 70 per cent of total VET public funding to TAFE institutes – up from 56 per cent today – and by strengthening regulation so that no more private providers are allowed to enter “this already-crowded, unco-ordinated sector”. 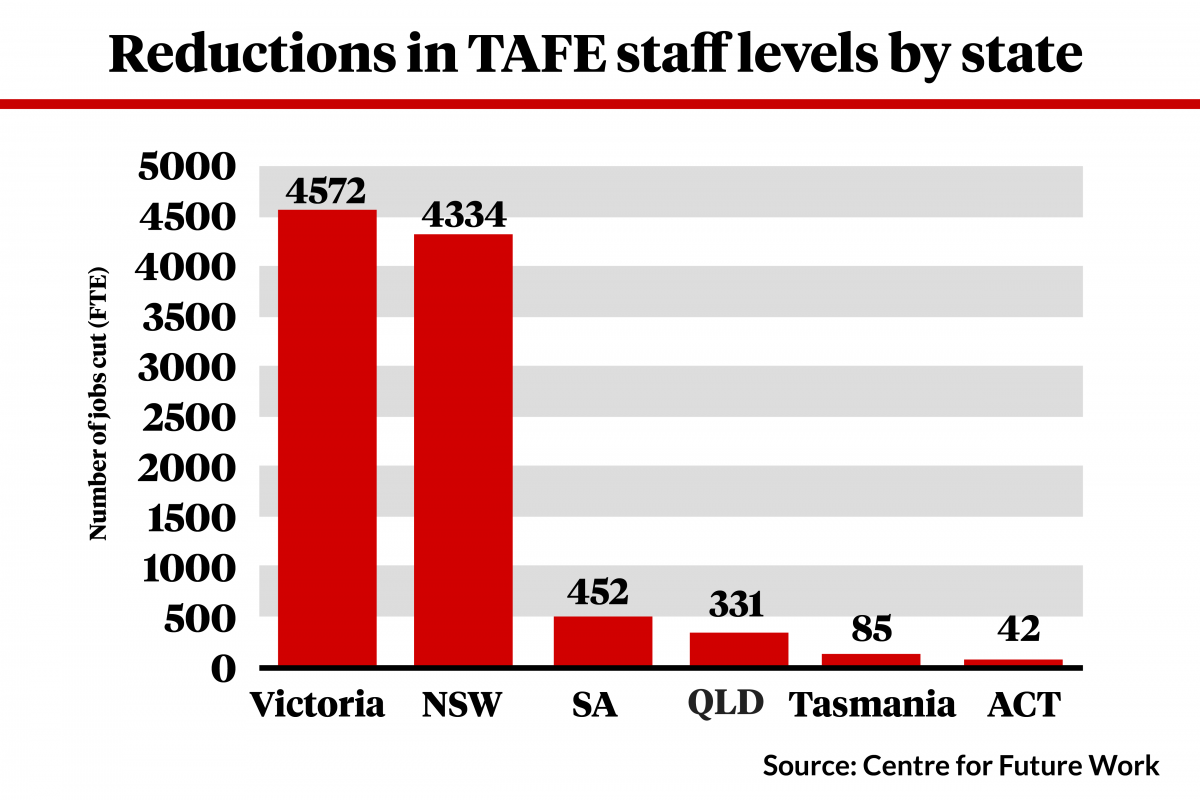 Engaging TAFE as a major stakeholder in the formulation of “a new generation of industrial policy” is also critical, in order to identify and nurture “strategic, advanced, innovative and high-value industries” to boost falling productivity growth, the report says.

And the government should also expand its apprenticeship subsidy scheme, which is equal to 50 per cent of wages, to support 100,000 new apprenticeships, rather than only providing a floor for existing ones.

This should be offered “on the condition that [apprentices] are still employed with their host employer one year after program completion”, and would cost the federal government $2.5 billion a year.

“Rebuilding the economy after COVID-19 will take many years, but that historic challenge will take even longer without a strong, co-ordinated, public-funded VET system to facilitate job transitions and open opportunities for young workers,” the report concludes.

“Billions of dollars in public funding have been wasted trying to build an inefficient, unco-ordinated private VET training market that has failed workers, business and government alike.”

The Australian Education Union says the government has cut funding to TAFE by $3 billion since 2013, with the number of apprentices falling by 140,000 people over that same period, and the number of TAFE providers declining by almost 40 per cent in the past five years alone.