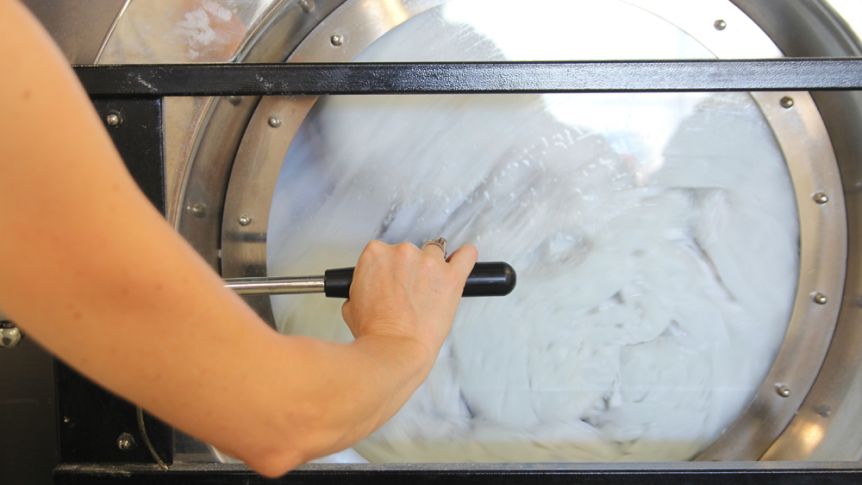 Staff from the laundry fear they might catch the virus if they work. Photo: ABC

A Melbourne cleaning company has taken staff to the Fair Work Commission after they refused to come to work following an outbreak of coronavirus.

About half of the staff working at Spotless laundry services in Dandenong did not show up for work on Wednesday, fearing a coronavirus outbreak at their workplace had not been handled properly.

According to the United Workers Union, a Spotless employee tested positive to coronavirus last week, which led to the workplace being closed for a deep clean.

All other staff in the workplace were expected to be at work the following day.

The union later found out the staff member that had tested positive had also been working in another area of the building.

On Tuesday, a second worker at the site tested positive to coronavirus.

In response, about 35 staff did not show up to work on Wednesday, fearing the virus was spreading in the workplace. That led Spotless to file an application with the Fair Work Commission compelling the staff to return to work.

The hearing was adjourned until Thursday morning.

The union wants all workers at the Dandenong facility to be stood down with pay until their coronavirus results are back.

Godfrey Moase, an executive director from the UWU said none of the staff had been contacted by Victoria’s Department of Health and Human Services.

“All contact with DHHS is being mediated through the employer,” he said.

There are also concerns among staff about “COVID linen”, Mr Moase said.

“This is a laundry that supplies hospitals linen, including linen used by coronavirus patients,” he said.

“Staff believe that linen is being mixed with other linen, creating risks to workers handling it.”

There was a mediation meeting between Spotless and the union on Wednesday night. However, they did not reach a resolution.

Spotless said of the 18 casual contacts who got tested for COVID-19, one had tested positive, two results were pending, and 15 results were negative.

“DHHS authorised the facility to reopen on Sunday,” it said.

“The s418 hearing has been adjourned until tomorrow morning and we will make a comment after the hearing.”