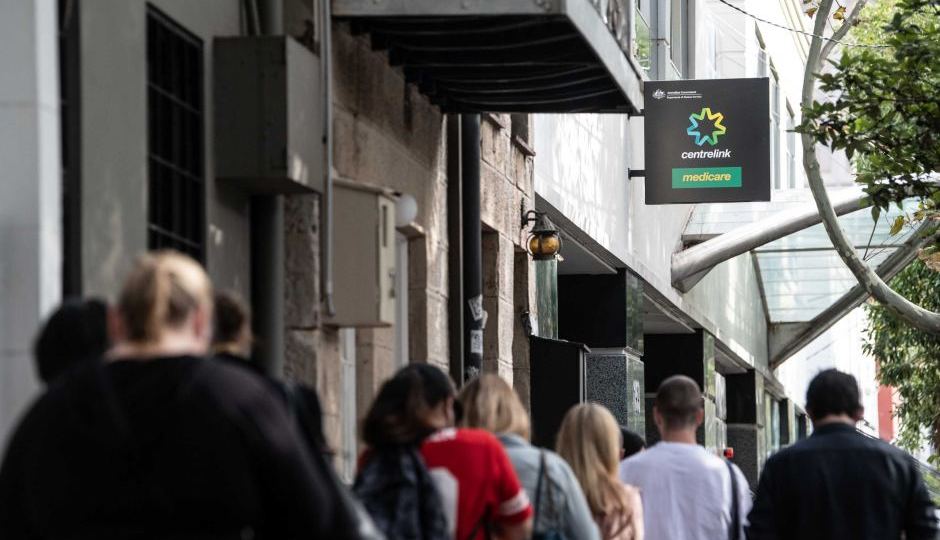 More than 1.4 million Australians have lost their jobs during the pandemic. Photo: AAP/James Gourley
analysis

Australia’s official unemployment rate only rose slightly last month to 5.2 per cent, up from 5.1 per cent in February.

But how could that be, as coronavirus spurs mass business closures and job losses?

It’s because the unemployment figures didn’t capture the full impact of the economic shutdowns – the survey of the labour force was taken too early.

The Australian Bureau of Statistics (ABS) data was collated between March 8 and 28, and it only related to the first two weeks of March.

The big unemployment queues that began stretching around city blocks outside Centrelink offices last month, as hundreds of thousands of people were made unemployed overnight, didn’t begin forming until late March.

So it’s the April jobs figures that are expected to show a shocking number – a much higher unemployment rate.

Next month we’ll also see an unusual situation in which hundreds of thousands of workers will be considered “employed” even though they won’t be working any hours.

The ABS has confirmed that people who are paid the government’s emergency JobKeeper payment of $1500 a fortnight will be officially classified as employed, regardless of how many hours they have worked.

That’s because the JobKeeper payment has been designed to keep up to six million workers attached to their employers and officially on their employer’s books, so the vital connection between worker and employer isn’t destroyed by the recession.

The hope is that, once the government starts lifting its restrictions and social distancing measures and businesses start reopening, those workers who are still attached to their workplace via the JobKeeper payment will be able to return to work quickly.

If those same workers weren’t officially attached to their workplace, they would be genuinely “unemployed”, with no workplace to return to after the restrictions were lifted.

Doesn’t that mean next month’s unemployment figures will be misleading?

There’s an argument that there should be a special category in the statistics for workers who receive the JobKeeper payment.

If they’re not working any hours and they’re still considered employed, won’t that make the unemployment figures misleading?

So isn’t the government buying itself an unemployment rate that’s 5 percentage points lower than it otherwise would have been?

But the ABS says it’s easier to count JobKeeper recipients as employed.

It says the key to interpreting the unemployment figures in coming months will be to watch things like the number of hours worked in the economy, the underemployment rate (which counts the number of people who are employed but who want more hours), the total wages and salaries bill and employment growth.

“Our own internal data gives a hint of what is to come in the official ABS data,” she said.

“The large increase in payments occurred in early April. We also believe there is a lag between registering and receiving the JobSeeker package, which suggests the official ABS labour market data will deteriorate sharply in April.”

The JobKeeper payments, which will keep workers attached to their employers, will be paid from the first week of May.

How bad will unemployment get now that the JobKeeper is in place?

As of Saturday, more than 850,000 businesses had registered to receive the JobKeeper payments for staff.

That’s almost 38 per cent of all Australian businesses.

Joshua Williamson, an economist at Citi, says when the JobKeeper payments start flowing, it could see some lost workers re-hired, which would improve the unemployment rate.

“Since JobKeeper will probably keep the unemployment rate down, we will also focus on other labour market indicators, such as aggregate number of hours worked,” he said.

“We expect to see a large decrease in the number of hours worked in the coming months, starting in April.

“Moreover, the ABS will be releasing a weekly payroll jobs and wages report starting next week.

“This will cover businesses which report wages through the Single Touch Payroll system at the ATO, which is the majority of SME’s and larger businesses.”

He thinks the unemployment rate will peak at 8.4 per cent, which is lower than Treasury’s estimate.

Why did the official unemployment rate barely rise in March, despite coronavirus spurring job losses?