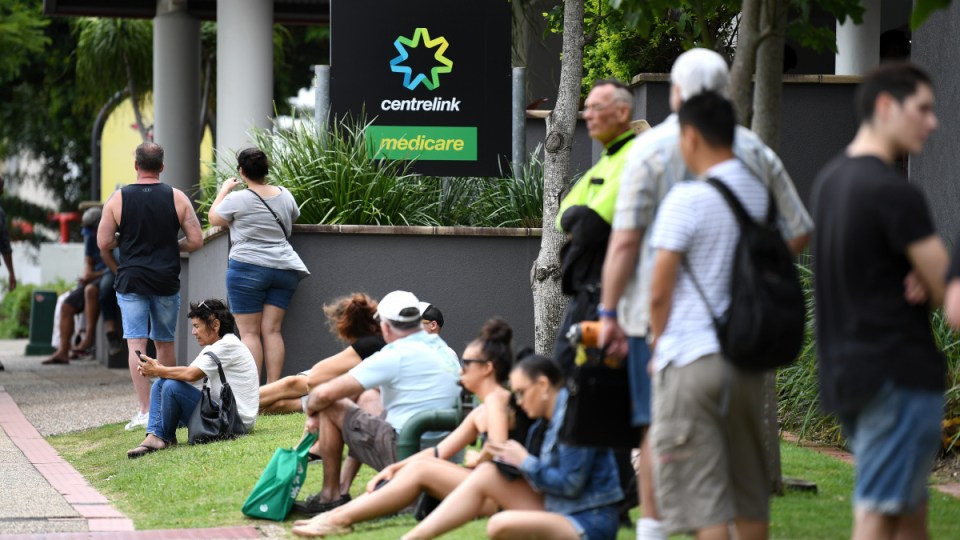 The crowd outside the Centrelink office in Southport, on the Gold Coast, in March 2020. Photo: AAP

Australians will have to wait a few more days to learn how many jobs have so far been lost to the coronavirus – but early signs of its economic impacts have already shown up in official ABS data.

The nation’s unemployment rate increased from 5.1 per cent to 5.2 per cent in March, according to seasonally adjusted estimates from the Australian Bureau of Statistics.

But economists said the data did not capture the full extent of the economic destruction already caused by the coronavirus, as described the labour market in the first two weeks of March.

The ABS conducted the survey between March 8-28, but will start to release weekly payroll and jobs data from April 20.

“As it does every month, the ABS asked about 66,000 people whether they had done paid work in the previous week – so in this case, from 1 to 15 March,” write Grattan Institute economists Brendan Coates and Matt Cowgill.

“But – if we use Google Trends data as our guide – the labour market didn’t hit the wall until late March, after the ABS had finished collecting its data for the month.”

They added: “The number of Australians searching Google for the word ‘Centrelink’ was more or less in line with normal levels through March – until the 22nd, when searches shot sharply up, rising even further the following day.”

The sharp jump in ‘Centrelink’ Google searches coincides with the national cabinet’s decision to impose tougher restrictions on the hospitality industries – with cafes and restaurants restricted to takeaway services on March 23.

“In addition to [the jobs and unemployment] numbers weakening in coming months, we expect any subsequent data will highlight a drop in hours worked, a rise in underemployment and a likely fall in the participation rate,” EY Oceania chief economist Jo Masters said.

“Underemployment and loss of hours worked will be important as it hits household income, which will impact spending behaviour.

“The April Westpac Consumer Sentiment survey suggested that one in five workers have lost their entire income.”

Later, Prime Minister Scott Morrison said March’s figures were likely to be the best in Australia for some time.

“That is a figure we can note but it is not one we could expect to be held going forward,” he said.

“We do need to prepare ourselves as a country for some very sobering news on the economic front in months ahead.”

Treasury’s own forecasts predict unemployment will rise to 10 per cent within the next three months as businesses close their doors and consumer confidence falls off a cliff.

It said the jobless rate would have tripled to 15 per cent had it not been for the government’s $130 billion JobKeeper wage subsidy scheme.

But some economists have said that Treasury’s figures paint an optimistic picture of the labour market as they do not take into account underemployment – when an adult is working less than 35 hours a week but wants to work more.

Independent economist Stephen Koukoulas told The New Daily Australia’s underemployment rate, which last year never dropped below 8.1 per cent, could conceivably rise to 15 per cent during the coronavirus crisis.

He said this could see the nation’s underutilisation rate – or the combination of unemployment and underemployment – rise to 25 per cent or more.

This would mean a quarter of the workforce – or roughly 3.4 million Australians – would either be jobless or in need of more work.

The ABS unemployment data comes after jobs site SEEK revealed in its latest unemployment report that the number of job ads in March were down 33.9 per cent on the year before.

Hospitality and tourism (minus 47.7 per cent), trades and services (minus 36.0 per cent), and information and communication technology (minus 30.7 per cent) were the hardest hit.

Since then the falls have only worsened – with new job ads posted  for the week ending April 12 down 68.6 per cent on the same week in 2019.

Coronavirus: Australia’s unemployment rate edges up to 5.2 per cent