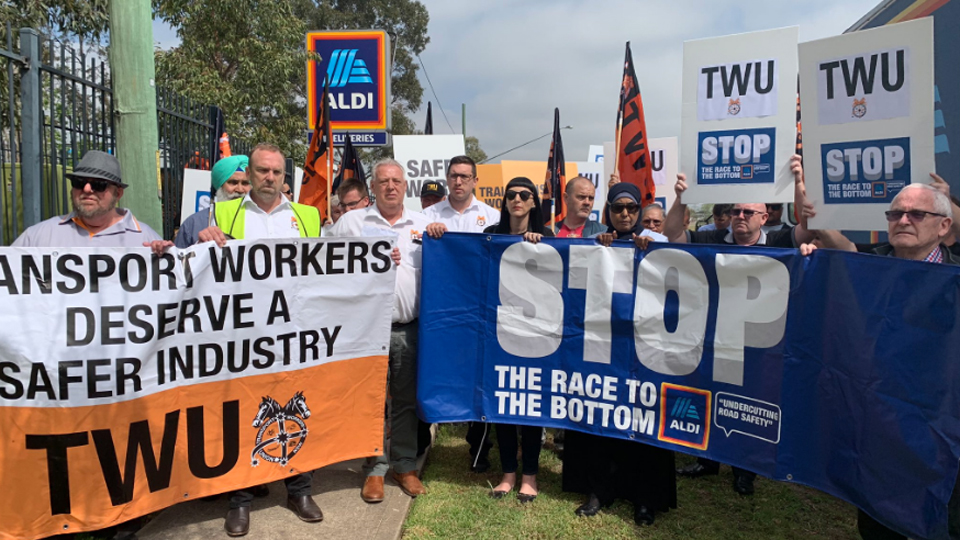 There were protests outside Aldi stores and distribution centres across Australia. Photo: Twitter/TWU

The protest is spearheaded by the Transport Workers Union, which says cost-cutting at the top of supply chains is putting pressure on drivers and operators to speed, skip rest breaks and delay vehicle maintenance.

The German supermarket chain is taking the union to court in action the TWU claims is designed to silence truck drivers about their safety concerns. But Aldi denied this.

“Our court action is to hold them to the law. It is not OK to use social and traditional media to propagate lies for their own gain,” it told the Nine Network.

The company said Aldi maintained the highest compliance standards throughout its operation.

“This includes food delivery, storage, waste and safety. We would never condone any of the allegations levelled at our business,” it said.

“We are not ignorant to opportunities to improve and, if any external or internal party has information regarding poor practices within our business operations, they will be investigated with urgency.”

Why are we protesting? Because @ALDIAustralia won’t acknowledge the role it has to play in making our roads safer and because it is trying to silence truckies speaking out about safety breaches #ShameAldi #auspol pic.twitter.com/bpELoQMuQM

“We are protesting again to remind Aldi that while they spend time and money trying to silence us, people are dying on our roads,” he said.

Mr Kaine said shoppers would be concerned to see the conditions for Aldi’s workers – and how products were stored in its supermarkets.

“We have contacted the TWU on more than 10 occasions, requesting details of their claims to ensure we can investigate the alleged safety concerns immediately,” he said. “Not once have these details been forthcoming.”

He said the company worked hard to keep staff and contractors safe through training, good maintenance practices and a safety first culture. It also actively promoted a whistle-blower policy to allow drivers to comfortably voice any issues they might have.

There were protests at Aldi supermarkets and distribution centres, including its head office in Minchinbury in Sydney’s west, on Wednesday.

Aldi’s Federal Court case against the TWU resumes on October 22.