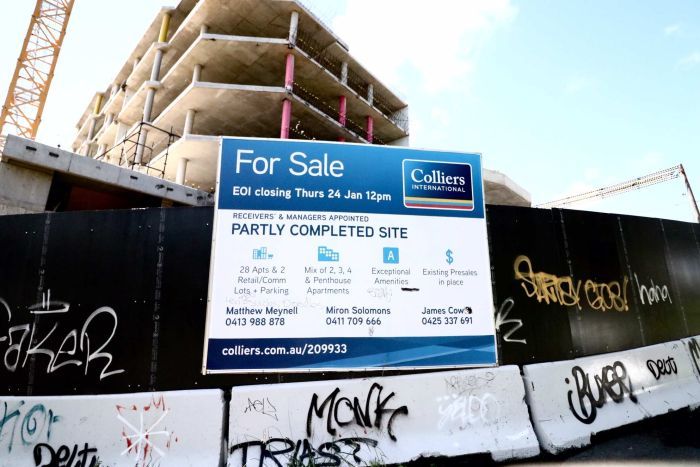 This apartment construction site in Cronulla was left half-finished after the developer went under. Photo: ABC

The statistics, provided by ASIC, show 169 NSW construction companies went into administration, receivership or a court-ordered shutdown in the June quarter – the highest number since the September quarter in 2015.

Experts say it is a reflection of the state’s slowing apartment and housing market, with about 50,000 fewer apartments being constructed compared to the same time two years ago, and a marked slowdown in housing construction.

An increasing number of half-finished apartment projects are dotting the Sydney landscape, with property development giant Ralan Group – which collapsed in July owing $500 million to creditors – the most high-profile example.

Association of Independent Insolvency Practitioners president Stephen Hathway said there was no doubt the industry was “stressed”.

“The general feel I’m getting from talking to my fellow liquidators, is that in the building industry subbies just slow down paying the little ones [construction companies].

“It’s a spiral, and it’s always a bit of a scurry at the end to make sure you get paid before it all falls over.”

While ASIC declined to comment on the building data, it said the most common reason companies went into administration was for “inadequate cash flow” or “poor financial control”.

Experts have also pointed to the trend of “phoenix activity” in NSW – where a new company is created to continue the business of a company deliberately liquidated to avoid paying its debts, taxes or creditors.

The NSW government said it worked with “various agencies” to combat phoenixing and was committed to “strengthening the building sector” through a number of reforms.

Despite making up about 6 per cent of NSW’s gross domestic product, the state’s construction industry is over-represented in the number of failed businesses, making up 20.6 per cent of all companies calling in the administrators over the 2018-19 financial year.