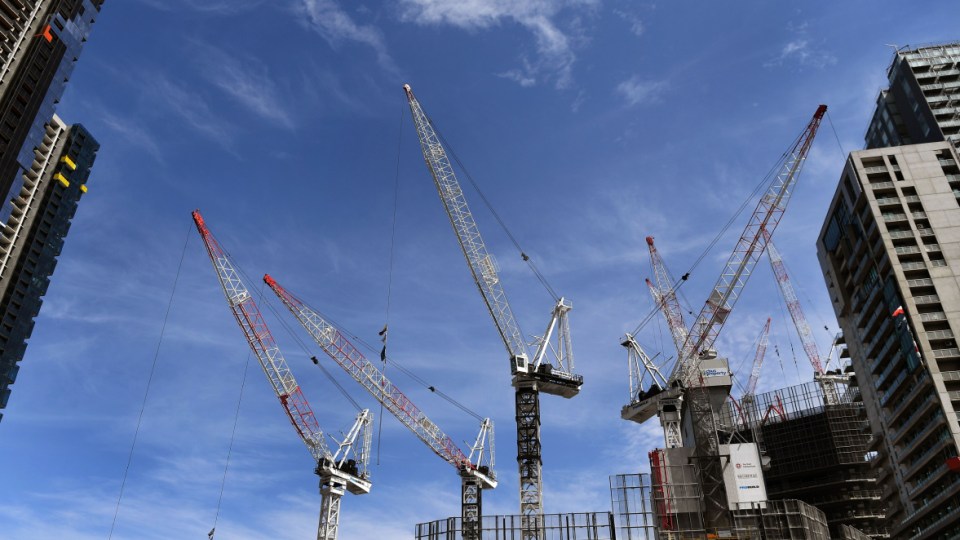 Prominent economists are calling on the government to invest more in infrastructure to offset the slowdown in building activity and stem widespread job losses.

The appeals for greater investment come after the Australian Bureau of Statistics (ABS) revealed that building approvals had fallen by more than 25 per cent in the year to June.

UBS Bank senior economist George Tharenou interpreted that fall as evidence the sector was on course to lose 100,000 jobs in the coming year.

And AMP Capital doubled down on previous predictions that up to 60,000 would be lost.

Economists Stephen Koukoulas and Diana Mousina told The New Daily the strongly performing non-residential construction sector could absorb some of those losses.

But Ms Mousina said there was “probably some capacity for the federal government to do more infrastructure investment”.

And Mr Koukoulas said the federal government should either announce more infrastructure projects or bring forward some of its $100 billion pipeline to boost economic growth, given poor housing investment threatened to drag it down.

“When you’ve got a fair bit of slack and you can borrow three-year money at 0.8 per cent at the moment if you’re the government, let’s fasttrack a few of the projects,” Mr Koukoulas said.

“It’s just a case of shuffling the timing of these projects, to the extent that you can achieve that.”

Greater infrastructure investment was crucial because it would soothe Australia’s growing pains and help GDP growth push past 2 per cent, Mr Koukoulas said – with changing bulbs in street lights and other “trivial-sounding projects” particularly commendable, as they were simple and quick to roll out.

Investment in social housing also gets a special mention, as it would provide jobs to recently laid off construction workers.

“At a time when you’re looking to get any sort of additional growth momentum because the economy is sluggish, do it now,” Mr Koukoulas said.

“Don’t do it at the peak of the boom, because you won’t find any workers.”

Ms Mousina was more optimistic about the economy’s growth prospects, telling The New Daily that it was set to grow by roughly 2 per cent over the next year, “because of strong growth in government spending, moderate growth in business investment and some contribution in exports”.

“The missing part is weakness in consumer spending,” she said.

That piece of the economic puzzle could come into place fairly soon though, with the flow-on effects of interest rate cuts and income tax refunds still to work their way through the system.

According to IFM Investors chief economist Alex Joiner, the rate cuts and tax refund had provided some cause for optimism.

He told The New Daily that while it “isn’t immediately obvious” which sectors of the market would absorb the 100,000 construction job losses, strong underlying demand for housing – thanks to rapid population growth and the high number of young people still living with their parents – meant the slowdown wouldn’t hit quite as hard as some expected.

“I don’t think we’re going to recapture the peaks of the residential construction cycle any time soon, but there is certainly support,” Dr Joiner said.

“The downside risks have diminished because the Reserve Bank has been proactive in taking action, and there is that fundamental support from population growth.”