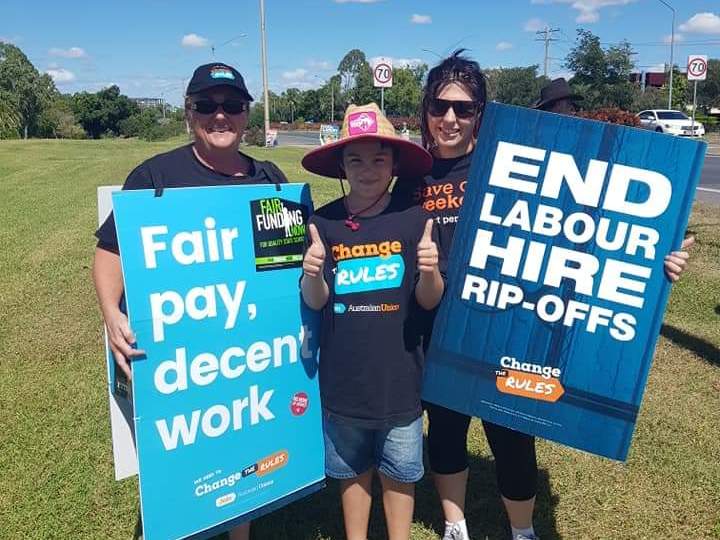 Reforms, like restrictions on labour hire, have been introduced by some state Labor governments. Photo: Debbie Muscat

Elections are key moments determining the direction of our society and economy. But they are moments, not the whole story.

The political and economic debates that go on between elections – typically focused more on issues than parties – are really what position the goalposts for the next poll.

For three years, trade union and anti-poverty activists have been campaigning strongly to “Change the Rules” of Australia’s labour market – demanding policies to lift wages, protect workers, and reduce inequality. The campaign attracted a lot of attention, and it shifted public opinion clearly in favour of better workplace protections.

Coalition candidates, of course, were dead set against this agenda.

But sensing the public’s views, they didn’t breathe a word about labour issues. Instead, they changed the channel – with a dishonest scare campaign over taxes.

The strategy worked, and they’re back in office. So was the grassroots campaign for labour reform a failure?

Not at all – and for two clear reasons. Firstly, the union campaign decisively won the public debate.

There is now widespread concern, even outrage, over the abuses that millions of Australian workers face every day: Record-low wage increases, workers employed as casuals for years at a time, many workers not even paid the legal minimum.

Polls consistently show strong majorities of Australians are in favour of restoring Sunday penalty rates, lifting the minimum wage and taking other action to empower workers.

It was once taken for granted in economic debates that wages were too high; now Australians firmly agree that wages are too low.

This historic shift in opinion was greatly reinforced by the Change the Rules movement. And it’s precisely why Prime Minister Scott Morrison kept his mouth shut about labour issues right through his “miracle” campaign.

Secondly, governments and public institutions at all levels have already been pushed by public anger to start addressing the worst inequities in the world of work. Numerous reforms have been legislated by state governments (mainly Labor): Like restrictions on labour hire, criminal penalties for workplace accidents, stronger equal-pay rules and fines for wage theft.

But even the Coalition government has to at least appear to care about these things.

In its last term it endorsed limited reforms in several areas: Some token but some with teeth (including holding lead corporations liable for abuses by franchise owners, and new limits on “phoenix” companies). These reforms are tiny steps, but they prove the power of the people’s movement for labour reform.

Even non-elected institutions will change their tune in the face of shifting public sentiment.

For example, the Fair Work Commission seems to have been influenced by public opinion in its minimum wage decisions over the past three years: 3 per cent in 2017, 3.5 per cent in 2018, and another 3 per cent last week.

That’s the best string of raises in a decade: Still not enough to lift the minimum wage above poverty level, but nevertheless an important step to lift low-end wages.

Other FWC actions also reflect the growing concern about inequality, including recent decisions regarding casual workers and food delivery riders.

Even the Reserve Bank of Australia, normally a bastion of economic rectitude, now worries out loud about weak wages – urging employers to lift pay, and pledging to keep interest rates low until they do.

That view would have been unimaginable before the upsurge in public anger over stagnant wages and widening inequality.

All these signs of incremental progress should whet the appetite of those working for bigger changes in the rules. Indeed, we need far-reaching and comprehensive reforms to restore a genuine ‘fair go’ in Australia.

But all the educating, lobbying, protesting, and campaigning that occurred over the past three years has made a visible difference, despite the re-election of a government dead-set on keeping workers down.

And their work must continue, to keep shifting the goalposts of public sentiment – and eventually winning the big policy changes that Australian workers need.

The public has spoken on our wages crisis. Now the Coalition must listen