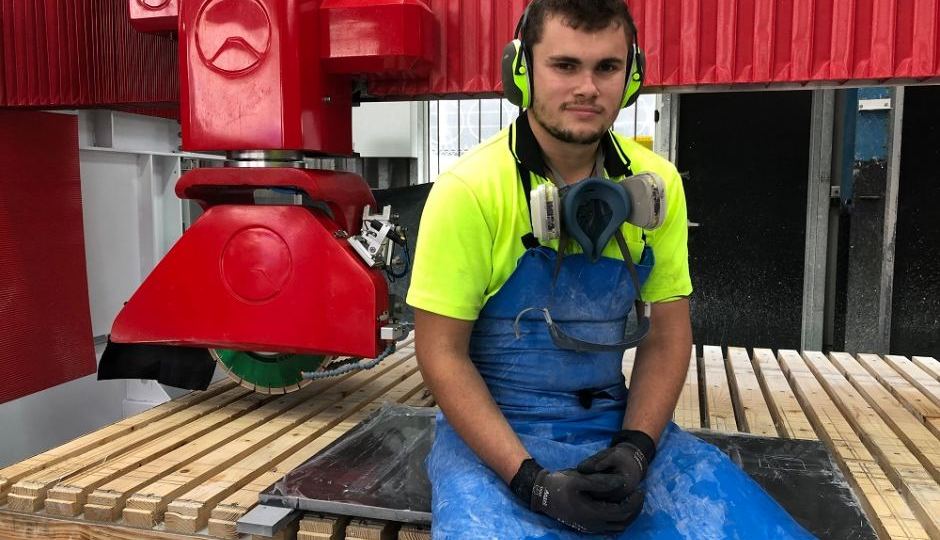 The Egyptian pyramids and the Great Wall of China would not have been built without stonemasons, but finding a tradesman to simply cut a hole in a kitchen benchtop is getting harder in Queensland as the silicosis epidemic takes hold.

A Queensland government audit of the state’s stone industry last year found 98 workers had contracted silicosis, with 15 of those cases considered terminal.

The disease is an incurable and often fatal lung disease caused by breathing in dust containing crystalline silica, which is found in manufactured stone.

The product has boomed in popularity over the past decade because it is less expensive and stronger than natural stone.

Derick Brosnan has operated a stone cutting business on the Gold Coast for seven years, and said silicosis had wiped out a generation of experienced stonemasons.

“It was all about how much you’d pay them, but now we don’t get any replies.”

The business owner, who employs 30 staff at his Arundel factory, said it was also getting harder to find young people wanting to enter the trade.

“I’ve got seven apprentices at the moment, which I’m lucky to get, because I’m restructuring and I just can’t get qualified stonemasons,” he said.

Nicholas Brown has worked as a stonemason for 20 years and said silicosis has rocked the industry.

“It was always there in the back of your mind, but it was never a reality until recently,” he said.

“It was always talked about as something somebody else would get.

“We have to be more vigilant with safety. We’re taking the measures now to improve the way we do things, and the technology is changing as well.”

Those changes came too late for Gold Coast stonemason Anthony White, who was diagnosed with the disease in 2017 and died in March this year.

The Queensland government reacted to the epidemic by auditing 138 benchtop fabricators last year and funding health screening for 810 workers.

During the audit, 562 infringement notices were issued by Workplace Health and Safety Queensland for breaches relating to exposure to silica from unsafe work processes.

Dry cutting stone, which has now been banned, was cheaper and quicker than using wet cutting machinery.

“We don’t do any dry cutting on site now which is another added expense,” he said.

“Unfortunately, it has probably made the product more dearer than normal. But the boys are safer and that’s the main thing.”

William Seibel, 21, recently finished his apprenticeship and now works for Mr Brosnan as a qualified stonemason.

He said silicosis was in the front of his mind.

“People I know personally actually have it, which is kind of pretty sad. But being here we’ve always followed the safety procedures. We’ve done pretty well,” he said.

The junior foreman said he always wanted to work in the industry.

“No one else can go around and say ‘I’m a stonemason’.”

But the Gold Coast business owner believes the ancient trade has a future.

“We want the young kids to know that it is still a good business, it’s been around for thousands of years, there are still monuments around the world that are still standing now,” he said.

“Most remain undiagnosed,” he said in a statement from the Royal Australasian College of Physicians (RACP).

“While 100 stonemasons have already been diagnosed in Queensland, there is likely to be several hundred, and possibly more than a thousand, affected workers across Australia.”

Six medical bodies including the RACP, the Thoracic Society of Australia and New Zealand, and the Lung Foundation had called on both major parties to commit to a national taskforce and fund a respiratory disease surveillance and registry program.

The federal government announced on Tuesday it will launch a national taskforce to help prevent potentially deadly dust diseases.

Federal Health Minister Greg Hunt said Queensland laws and practices unfortunately have not been as strong as some other states.

He said $5 million will be spent on the initiative.

“This is about ensuring that we eliminate hazards through better machinery, that we have safer workplaces,” he said.

“We have increased prevention and we have a register to protect workers against silicosis and other dust diseases.”

A spokesman for the Queensland Minister for Industrial Relations, Grace Grace, said a new industry Code of Practice was well advanced, and would be finalised as soon as possible.