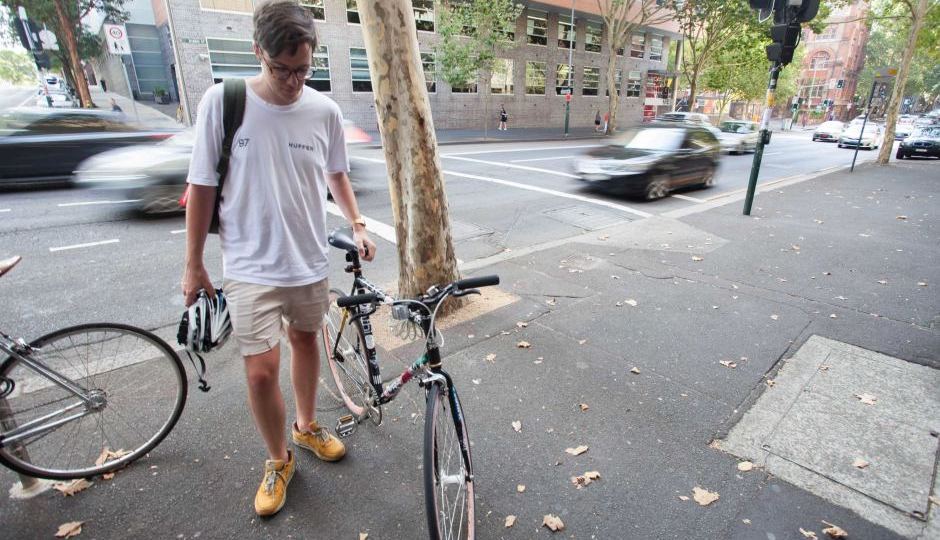 Andrew Rickert, 23, said he received two hours' training when he started at Deliveroo, but safety was a constant concern. Photo: ABC

More than three-quarters of Australia’s growing army of bicycle fast food couriers are earning less than the minimum wage, the first study of the sector has found.

Most delivery riders on the nation’s roads are men, many of whom are from non-English-speaking backgrounds.

The Transport Workers Union (TWU) is today launching a campaign to boost rates of union membership in a bid to improve workplace conditions for the riders.

TWU national secretary Tony Sheldon said thousands of bicycle couriers were being exploited, and many of them were regularly putting their lives at risk without adequate insurance.

“This is wage theft at its worst,” Mr Sheldon said.

“A large number of these workers — over 70 per cent — are requiring this work for their substantive means of employment.

“Many of these people are getting injured weekly, but they are receiving no worker’s compensation and no sick leave.”

The survey of food delivery riders was conducted in Sydney and Melbourne, but Mr Sheldon said its findings were consistent with what union leaders had heard in other capital cities too.

It attracted 160 responses across the two cities, with just under half the respondents saying they had either been injured at work, or knew of others who had.

The TWU claims an equivalent hourly award rate for bicycle couriers would be $24.41, but said its survey found 77 per cent earn less than that amount.

“People are working in some cases more than 80 hours a week trying to etch a living, with the fear that any day they can be bowled over by a car.”

Deliveroo pay ‘not that great’

He said he juggled shifts cycling food around Sydney’s Newtown while studying full-time, but ultimately quit the job after pressure from his parents.

“They said, ‘Look, you’re not earning that much, in the interests of your safety, just stop and we’ll cover you until the end of semester’,” he said.

Mr Rickert said he received about two hours’ training when he started at Deliveroo, but safety on crowded city streets was a constant concern.

He said he had heard of other riders being injured on the job, including one who was reportedly knocked over by a cement truck while cycling in central Sydney.

The three main companies in the food delivery sector in Australia are Deliveroo, UberEats and Foodora, which all hire riders under different conditions.

But lawyers say what unites all three companies is that they generally recruit riders as “independent contractors” rather than hiring them as employees.

In Mr Rickert’s view, the rate of pay at Deliveroo was previously fairly good, but that riders who signed up after he did were not offered as good a deal.