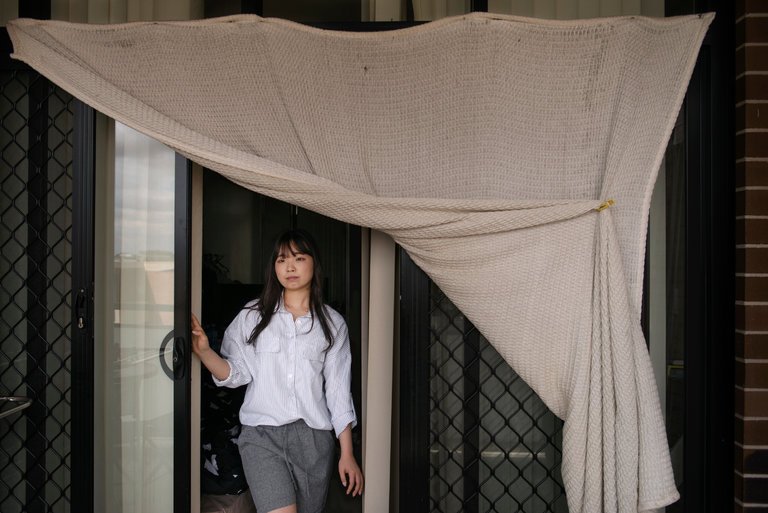 Gabi Cho accuses the hair salon she once worked at of underpaying her and exploiting her lack of English skills. Photo: Matthew Abbott / NYT

Like many young South Koreans, Gabi Cho moved to Australia for the chance to learn English, breathe its famously clean air and make some money.

Two years ago, she found a job cutting hair in the Lidcombe area of Sydney. It paid about $12 an hour. To get the job, she put down about $380, refundable if she was never late or absent from work.

At the time, she said, she did not know all of that was illegal.

Ms Cho, who now contends that the salon underpaid her by up to $30,000, is one of thousands of temporary foreign workers in Australia who are chronically underpaid by their employers, according to a survey released this week.

It adds to growing evidence that Australia is home to a large but silent underclass of migrant workers, many of them international students or simply adventurous backpackers, who are rarely heard from despite widespread labor abuses.

“The owner exploited my lack of English, lack of knowledge of the law and work rights,” Ms Cho said through a translator. “I want people to know what happened to me so it doesn’t happen to anyone else.”

The survey comes amid a rising awareness of labour abuses among temporary workers in Australia. With its developed economy, healthy environment and tight job markets in many places, Australia looks appealing to those looking for a foothold to live there and to those who simply want to make some money while visiting.

The discussion is also part of a broader debate over how many foreign workers to admit into the country and whether they should be allowed to stay permanently, with Prime Minister Malcolm Turnbull and others arguing that many foreign workers displace Australians looking for work.

The survey released on Tuesday, called Wage Theft in Australia, covers an estimated 900,000 migrants with the right to work here. It found that roughly a quarter of international students made less than $12 per hour, and almost half made $15 or less.

In Australia, the national minimum wage is $A18.29, or $US13.84 per hour. Casual employees, who are not entitled to vacation or sick leave, typically make more.

The worst paid jobs were in fruit and vegetable picking and farm work, according to the survey.

“We know now that this is entrenched, it’s widespread, and for many of these migrant workers, wage theft is severe,” said Bassina Farbenblum, a co-author of the report and a lecturer in law at the University of New South Wales in Sydney.

Many of the workers knew they were being underpaid, the survey found. Because of their visa status, the authors said, they probably did not expect to receive the legal minimum wage.

“We’ve got an invisible, large, low-wage labor market,” said Laurie Berg, a law lecturer at the University of Technology Sydney and a co-author. “The issues are disguised and we’re not addressing that.”

The authors, who worked with local migrant and worker groups, acknowledged flaws in the survey, which included about 4300 workers and was translated into 12 languages other than English. It was conducted online, which could exclude some groups, and because it was anonymous it could be completed more than once. Participants were invited to apply for a drawing of about $1000 in Amazon gift cards.

Still, its conclusions roughly match those of some Australian government officials. Young people and people from migrant backgrounds may be more susceptible to exploitation in the workplace, said Mark Lee, a spokesman from the Fair Work Ombudsman, an independent government agency that investigates workplace complaints and enforces labor law.

He added that this was because of a variety of factors, including “language barriers, lack of understanding of their workplace rights, limited knowledge of where to go for help and concerns over their visa status”.

Ms Cho, the Lidcombe salon worker, said she was unaware of her rights until her husband pointed out a news article about a Sydney sandwich shop that the Fair Work Ombudsman accused of underpaying South Korean employees on working holiday and student visas by more than $100,000. She filed a complaint with the ombudsman’s office, which declined to comment on her complaint.

“This is a big issue in Korea,” said Ms Cho’s husband, Andy Rim, a South Korean national who works as a warehouse supervisor. “They’re sending people overseas to work as slaves.”

Mr Rim said he and his wife came to Australia through an employment program supported by the South Korean government.

Daniel Song, 28, moved to Australia in April on a working holiday visa from a small town in the Chinese province of Shandong. He thought Australia would be a good place to learn English, he said, and he had heard that wages were higher than in China.

Working in construction in the central business district in the city of Brisbane, Mr Song said he was paid $15 per hour. More than a third of workers at his site are Chinese or Taiwanese and on working holiday or tourist visas.

“The salary difference doesn’t seem fair,” he said. “But it makes sense, and I don’t feel I have a choice.”