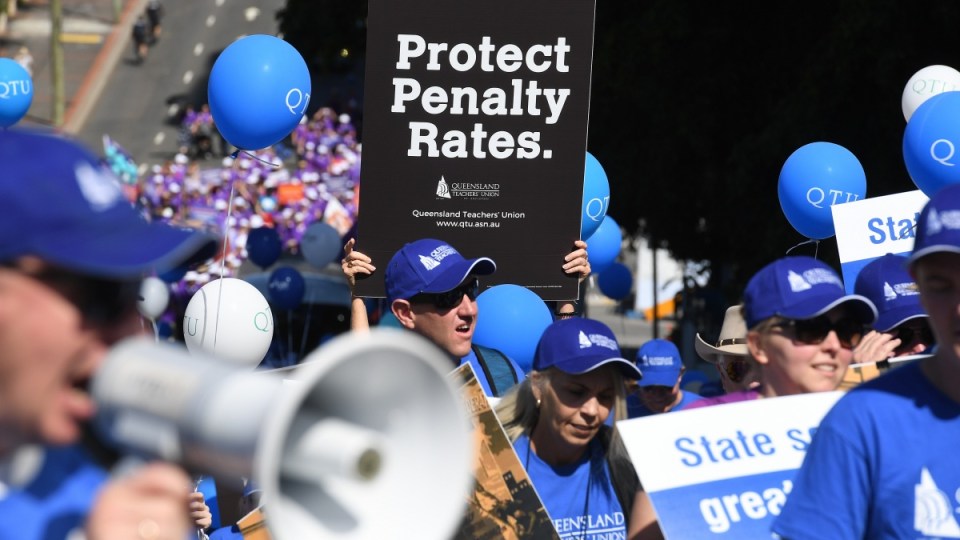 Demonstrations and workers' anger did nothing to foil the penalty rate reduction. Photo: AAP
analysis

Far from bringing the issue to a close, the recent decision of the Federal Court to uphold what amounts to a wages cut for Australia’s lowest-paid workers has set the scene for a bitter battle over penalty rates.

On October 11, the Federal Court dismissed the appeal by two of the unions most affected by the Fair Work Commission’s unpopular decision to reduce Sunday and public holiday penalty rates.

Prime Minister Malcolm Turnbull has once again misread the public mood on this issue, and likely underestimated the union movement’s resolve. Penalty rates could turn out to be Mr Turnbull’s WorkChoices.

People are angry over the cuts to penalty rates. Hundreds of thousands of low-paid workers are angry, the parents of kids working in casual jobs are angry, struggling households relying on penalty rates are angry and many think it’s just plain mean to cut the wages of those who can least afford it.

The unions that launched the appeal, United Voice, which represents hospitality workers, and the Shop, Distributive and Allied Employees Association, which represents retail workers, have vowed to fight on. They are right to do so.

Employer groups argue that reducing penalty rates on Sundays and public holidays reflects Australia’s modern “24/7 economy”. In a buoyant economy it would be reasonable to debate the relevance of penalty rates, but Australia’s is anything but.

Reducing penalty rates in the current environment – one marked by stagnant wages growth and record underemployment – amounts to wage theft.

For Australian Industry Group chief executive Innes Willox to blithely announce that “it is time for everyone to accept the decision of the independent umpire and move on” borders on the callous.

The cuts to penalty rates, employers insist, are modest and in any case are to be phased in over three to four years. But they also claim the cuts will save employers so much that. According to Mr Willox, they will “generate increased investment and employment, which will be beneficial for employees, businesses and the broader community”.

Pizza Hut workers will be astonished to learn that they are standing in the way of a new age of economic prosperity.

The government’s position is that it will not legislate to overturn the Fair Work Commission’s decision because the decision of the “independent umpire” is sacrosanct.

In most cases that is as it should be, but there are times when a government must suspend its articles of faith for the public good, particularly when it involves the most vulnerable in the community.

Mr Turnbull thought it appropriate to cast aside the Liberal Party’s fealty to market forces and strongarm energy leaders into lowering people’s power bills. But reversing the penalty rate cuts is curiously out of the question.

The Federal Court’s confirmation of the penalty rate cuts comes not only during a difficult economy but also at a time of deep structural change which is transforming the nature of work.

Surging underemployment, the casualisation of work and the move from full-time work to task-based contracts – the so-called “gig economy” – are changing the foundations. For some the changing nature of work will appeal, but for the lowest paid it means uncertainty and hardship.

The penalty rate cuts are another step towards the creation of a permanent underclass of working poor as exists in the United States. Is this really the Australia the Turnbull government wants?

ACTU secretary Sally McManus wants Mr Turnbull to act on penalty rates: “Working people’s wages are flatlining and their work is becoming more insecure. The government has a responsibility to act.”

The Prime Minister is unlikely to heed Ms McManus’s call, in which case he should not be surprised if penalty rates is the sleeper issue that causes him the biggest headache at the next election. If he lasts that long.