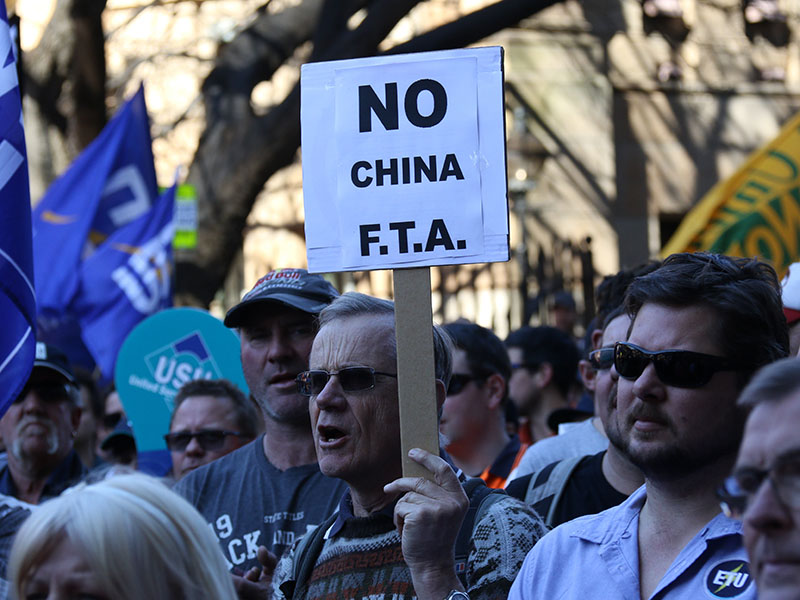 More than ever Australia will have to tread a fine line between US and Chinese interests. Photo: AAP

The political rhetoric on the China Free Trade Agreement is glossing over the threat to Australian manufacturing, including 15,000 jobs in Australia’s pulp, paper and fibre packaging industry.

The FTA will see the tariffs imposed on some Chinese manufactured products fall to zero as soon as the agreement comes into force.

In contrast, many Australian manufactured goods exported to China face a staged reduction of their tariffs over a number of years.

The main employer body for the manufacturing sector, the Australian Industry Group, says it has “significant concerns” over the imbalance of the staged tariff reductions.

“It appears that the fears that many Australian manufacturers had for ChAFTA have been realised; namely that industries deemed sensitive in China remain heavily protected while most Australian industries face zero tariffs from day one of the agreement,” it said.

Australia already imposes low tariffs, but the Ai Group argues in a submission to the federal parliament’s Joint Standing Committee on Treaties, that the China FTA has “reduced the time industry has to transition”.

The submission says the Australian fibre packaging industry – which makes cardboard packaging and corrugated boxes – expects to face a “significant increase in competition from Chinese competitors selling to Australia at zero tariffs from day one.”

However, the Australian packaging producers have no scheduled tariff rate reduction for selling their product into China under the current terms of ChAFTA.

Australia already imports a lot of corrugated boxes from China, but the Ai Group estimates that the local industry can expect to face almost $1billion of Chinese imports over the next four years.

“Given these statistics it is difficult to understand why our negotiators accepted such an unbalanced deal,” it said. “With the anticipated lost tariff revenue we are effectively providing the Chinese packaging industry with a $58 million subsidy over the next four years.”

The Ai Group submission warns that Australian paper and packaging companies – which include the Pratt family’s Visy group and the Amcor spin-off Orora – could “make the strategic decision to move manufacturing to China, as this is the business model currently being rewarded under ChAFTA.”

As things stand, Australia exports container board to 60 countries and it is used as packaging for many Australian products. It is important for exporting out food and beverage products around the world.

Now, it’s important to note that the Australian Industry Group supports the ratification of ChAFTA, notwithstanding its reservations on unequal tariff reductions

But the Ai Group recommends that the Department of Foreign Affairs and Trade is “directed to never accept an FTA deal where Australia offers any tariffs advantages that is not reciprocated by the FTA partner.”

Seeing the forest from the trees

The Australian Forest Products Association notes in another its submission that ChAFTA delivers an “inequitable tariff outcome for paper products which would have an adverse impact on investment and trade in the Australian paper industry.”

“There is an asymmetrical treatment of paper products, including tissue, copy paper, newsprint and packaging papers – whereby Australian tariffs would immediately drop to zero or fall to zero within 3 to 5 years with no change at all in the Chinese tariff levels for those same products under the proposed ChAFTA.”

So, it’s in Australia’s interest to have a free trade agreement with China, particularly when it comes to agricultural exports such as dairy and beef, when competitor nations like New Zealand and Chile already have their own FTAs.

And, yes, free trade agreements have to be judged on their aggregate impact for the national economy and bilateral relations.

However, there will be winners and losers with ChAFTA.

The Abbott/Turnbull government is accused of inflating the number of jobs that will be created by the China FTA, and we’re hearing little about the “losers”, like much of the manufacturing industry.

The deputy chairman of the JSCOT treaties committee is Labor MP Kelvin Thomson, whose seat of Wills in Melbourne’s northern suburbs includes a swathe of manufacturers, big and small.

According to Thomson: “The Coalition government was so keen on getting to a deal on agricultural products that it was indifferent to the effect on others – manufacturers and workers who face the risk of cheaper competition.”

* Any Australian manufacturers wishing to discuss the China FTA and how it affects them should email the author at: skulleymark@gmail.com ‘Australian manufacturers’ fears have been realised’