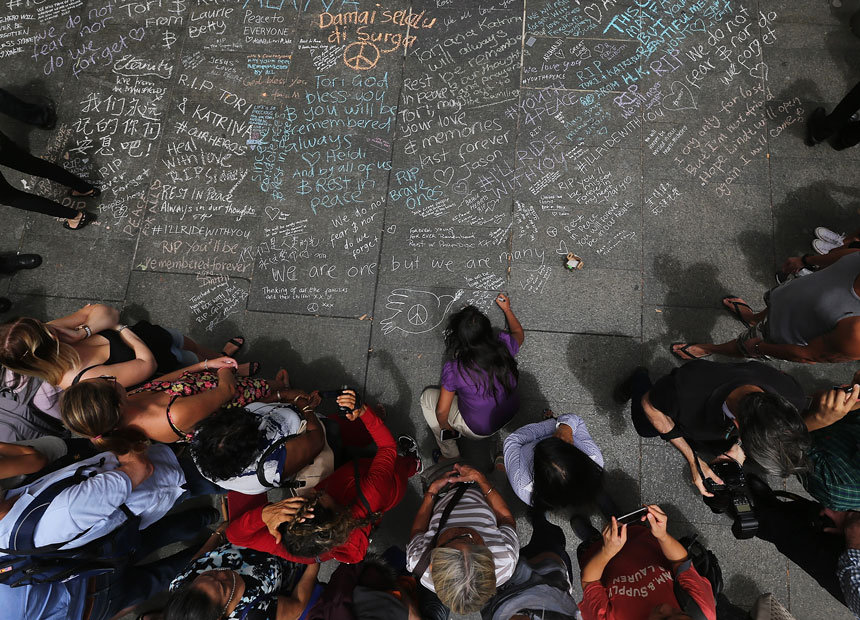 The sad events this week left me woolly-headed and distracted, struggling to work.

It’s partly thinking about the café workers and the other hostages going about their everyday business – working or grabbing a morning coffee – when their world narrowed into a room controlled by a crazed gunman.

But it’s also a strange mixture of the personal and professional as a journalist.

• How to give rather than spend this Christmas
• Happiness at work – easy to say, hard to find
• Why age shouldn’t matter in the modern workplace

A member of my extended family was murdered in a multiple homicide some 30 years ago. I’m not going into the details because his closest relatives and loved ones carry their grief around every day, year after year.

But it reminds me that anniversaries come and go – as do “true crime” books and television shows, rehashing famous “cases” – but the pain stays for the inner circle of family and friends.

I saw these events as a young journalist and it has coloured my view towards the reporting of violent crime.

It’s true that many grieving and stressed people will talk to journalists, whether it’s to make sense of their loss or to make a particular point. But it’s also true that grieving people are mostly in a state of shock and highly vulnerable.

The journalists’ union – the Media Entertainment and Arts Alliance – has a code of ethics, which touches on tragic situations in two ways.

In general terms, journos should: “Use fair, responsible and honest means to obtain material. Identify yourself and your employer before obtaining any interview for publication or broadcast. Never exploit a person’s vulnerability or ignorance of media practice.”

More specifically, they should: “Respect private grief and personal privacy. Journalists have the right to resist compulsion to intrude.”

During the Sydney siege, most media outlets rightly complied with the police request not to broadcast the gunman’s demands or the messages that he forced individual hostages to record or write.

The Guardian examined the media coverage, as did academic Julie Posetti for The Conversation. But the spread of social media means that everyone has to think before they tweet or post nowadays.

I was shocked and then angered by the tweet issued by media tycoon Rupert Murdoch, who bragged about The Daily Telegraph getting an exclusive on the final shootout.

AUST gets wake-call with Sydney terror. Only Daily Telegraph caught the bloody outcome at 2.00 am. Congrats.

Like a man shaking his fist at the clouds, or maybe the Media Sun God, I tweeted that Murdoch should apologise, that it was a time of national mourning, not bragging.

However, I was more shocked when a pro-gun spruiker in the US tweeted back to me that the siege was somehow fostered by the Australian government “banning guns”.

Similar diatribes were delivered on the likes of Murdoch’s Fox News.

One of the reasons the Martin Place siege was so shocking for Australia was its rarity, particularly compared to the US. Australians can own certain types of gun, but the laws were tightened by former PM John Howard after the Port Arthur massacre in 1996 when 35 people were killed and 23 wounded.

I don’t know how the Martin Place siege should be classified because the gunman seems, to me, to be a disturbed, violent man rather than a “terrorist”.

Somebody who had been identified as a worry by the Muslim community as early as 2008.

But we don’t yet know all the facts, so I’m not rushing to judgment. It’s heartening that so many Australians have sought to reach out to Australian Muslims, and we can dismiss the idiots who posed for “selfies” at Martin Place.

We can also dismiss the pro-gun lobby who argue that more guns and more firepower make us safer.

In the meantime, families and friends are suffering, as are those who “escaped”, along with the police and emergency service workers.

They have to live with it. It’s a burdensome part of their life, not a “story” to be watched, tweeted or shared on Facebook.