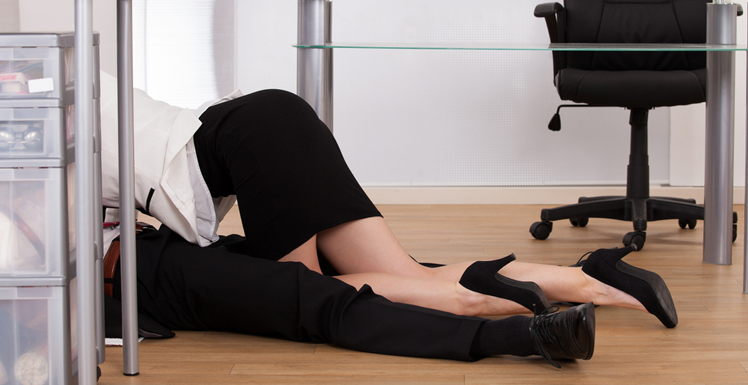 Next time you’re sitting at your desk at work, look around and try and guess who is dating, because according to a new study, there’s a good chance almost half of them have hooked up with a colleague.

Forty per cent of Australians have dated someone at work, and apparently the majority of us don’t care, the study by job site OneShift finds.

• Colleagues wasting your time? Here’s how to stop them
• Why Aussies are ‘chucking a sickie’ to escape stress

OneShift CEO Gen George says social media and long working hours have blurred the lines between our personal and professional lives, resulting in a change in attitudes towards work relationships.

And it’s not just love that’s in the air. Mateship rates a mention too, with experts convinced that making friends at work can help you deal with setbacks and improve your performance.

Secret office romances are no longer a big deal either. At least, not among employees (your boss might think differently though.)

The OneShift survey found 80 per cent of people didn’t mind if their colleagues were hooking up.

“Maybe 10 years ago or 15 year ago, it wouldn’t have been as acceptable. I think it’s just the way of the times,” Ms George says.

“Because people can connect 24/7, relationships are not restricted to nine-to-five in the work environment.”

Don’t worry, there’s nothing wrong with you

“You’re spending a lot more time with your colleagues, more than your friends and your family, so if you don’t get along with them, it’s going to be a horrible experience,” she says.

“The friendships you have with your colleagues are important not only to your own success, but to the success of the business and should be encouraged by employers.”

• Smart thinking: how to wow the managers at your next meeting

As an employer herself, Ms George says bosses should try to foster strong bonds among their workers.

“I think rather than trying to stop it, they should embrace it.

“If people have an emotional connection at work, or with the brand, or with their colleagues, then they’re going to work harder, so why stop it?”

Eighty per cent of the 900 people surveyed thought it was acceptable to be friends with co-workers online.

Sixty per cent of people said being connected with colleagues on social media had no effect on the kind of content they shared.

“If someone is expected to respond to emails on their smartphone or the company’s social media channel at 10.30 at night, then the office has already invaded the home,” Ms George says.

“It’s no surprise then that with those walls breaking down, we’re more comfortable socialising with colleagues outside of work, whether that’s online, at the local pub or cinema after work, or at the beach on the weekend.”

Love in the workplace: taboo no longer