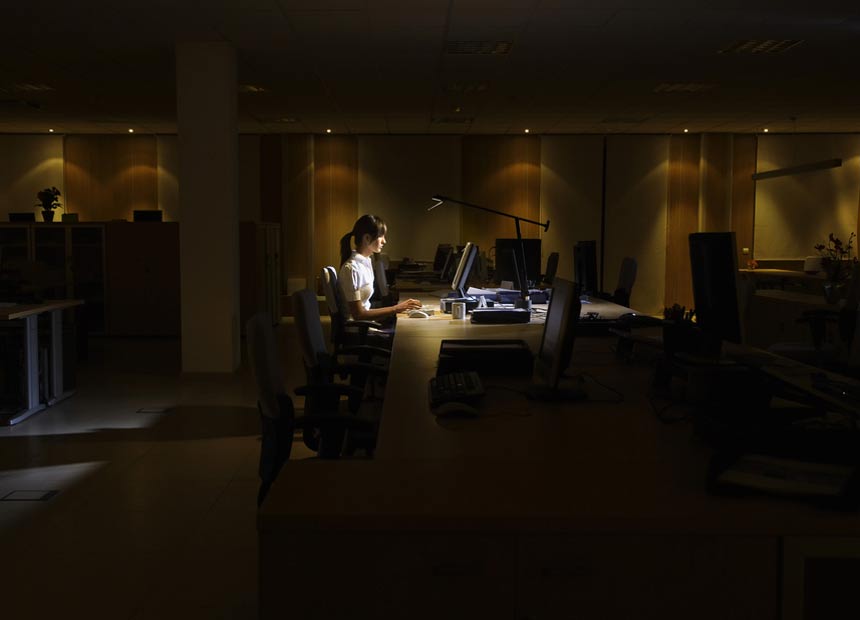 Do you only leave the office when it’s dark outside? You’re not alone.

As a collective, Australians are donating a massive $110 billion in free labour every year. If we were to reallocate these hours to the unemployed, our unemployment rate would be zero.

• Seven unspoken employment taboos to avoid
• Love in the workplace: taboo no longer

A recent study of 1000 Australians conducted by The Australia Institute found that workers felt insecure about their jobs and thus were overcompensating with long hours.

“Because companies are cutting back so much, people are doing two or three jobs so there’s a lot of pressure and they can end up falling over.”

And it could get worse. As part of the Fairwork Commission’s review into pay, big business is pushing for overtime pay in industries including trade, hospitality and retail, to be completely removed and be replaced with extra time-off.

The Australian Industry Group says time-in-lieu in place of overtime was necessary to offer businesses flexibility.

Before we all lose our sleep and social lives, here’s why, and how, you should cut back on overtime work.

Be honest with yourself, is the reason you’re hanging around because your employer is a tyrant, or because you’re avoiding something else like going home?

Performance psychologist Dr Jeremy Adams says if you have to stay late, make sure it’s for the right reasons.

“The main problem I see is that people overemphasise work without understanding why they’re doing so,” performance psychologist Dr Jeremy Adams says.

You’re making work worse for yourself

If you make a point of always being available, your colleagues will, understandably, take advantage of that.  Colleagues also take their cues from other colleagues and working excessively promotes a culture of unhealthy competition when it comes to working hours.

It makes you look bad

Consistent overtime can suggest lack of efficiency rather than dedication. Dr Adams says it’s a vicious cycle where both the manager and employee can be at fault.

“A lot of people aren’t trained in time management,” he says.

“They get given tasks they can’t complete in an appropriate time, they stay late to complete it and their manager thinks they are lazy and puts more pressure on them.”

Unfortunately, there’s a big misconception among managers that being present equates to being productive. In reality, human beings have approximately six hours of productivity available each day.

“Productivity drops when people are tired, as does their ability to make decisions and interact,” Dr Adams says.

After too much overtime, you are also more likely to withdraw psychologically from work and start to just do the minimum.

Your health will suffer

Ms Sigler says sitting inside for hours a day takes a toll mentally and physically.

“If you work more than 10 hours a day you’re likely to have a lot of physical problems like heart disease later on due to the stress,” she says.

Deficiency from a lack of vitamin D and joint and fitness problems from a sedentary lifestyle can also lead to pricey doctor’s bills later in life.

For those stuck in a downward spiral of overtime, expect your family and friends to suffer.

“You can become detached from the family, from friends, from having a normal marital relationship,” Ms Silger warns.

If you’re a parent, this is even more problematic.

“Having to dump your kids in a preschool or day care all the time promotes inconsistent parenting,” Dr Adams says.

“It also encourages the idea that it’s appropriate to have children and be an absent parent.”

Schedule your inbox time: Get on top of any email build-up early in the day and then turn your attention to more pressing tasks. That way, you’re less likely to miss important agenda items that could force you to stay back.

Pretend you’re on a plane: No, really. Once you clock off, career coach Sally-Anne Blanshard highly recommends switching your mobile phone to airplane mode to prevent emails, calls and messages from coming through. Treat gym time, sleep or family dinners like long-haul flights. If you’re anxious about missing something important, iPhones have a “do not disturb” function which allows certain calls to come through while blocking everything else.

If you don’t like it, change it: If your workplace has an inherent culture of overtime, take a stand. Make a point of vocalising your achievements and your intention to leave on time. Ms Blanshard suggests politely saying something along the lines of, “I’m nearly done with this report and will be heading home at 6pm, if you need me please let me know before then”.