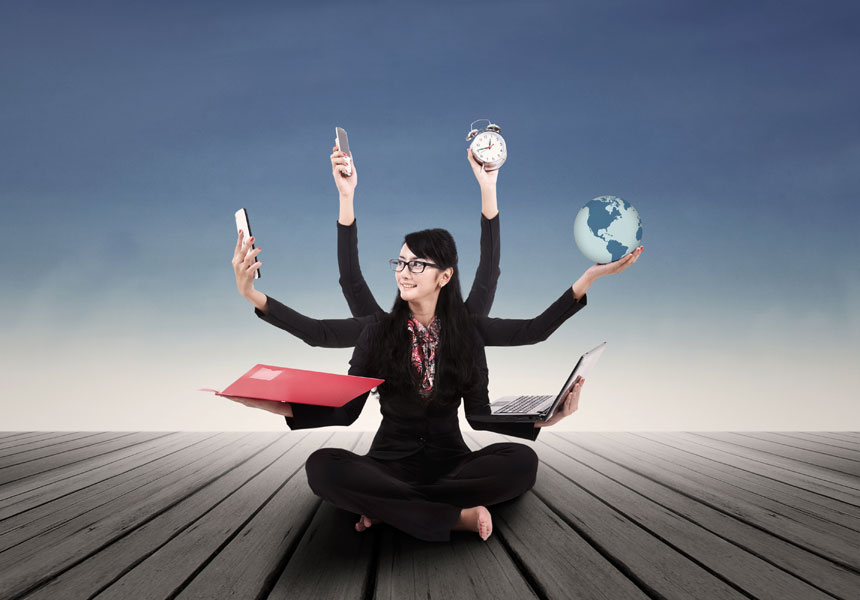 It’s a familiar scene. You’re checking your emails, looking at text messages on your phone, chatting to a colleague and working on a project due that afternoon … all at once.

Multitasking is a part of every day life now, with many of us finding it impossible to do just one thing at a time.

You may think you’re being effective and productive, but there’s now a plethora of evidence which suggests multitasking is bad for your brain, productivity and stress levels.

• Chasing happiness at work
• The story every procrastinator should read
• Should I quit my job? Here are four ways to tell

Research by molecular biologist John Medina found multitaskers made twice as many errors, took 50 per cent longer to complete a single task and saw their productivity almost halve compared to people working on a single thing.

But despite the startling findings, some researchers say that multitasking might actually occasionally be a good thing.

Distraction is now part of the way we live. The average time we spend on a task before being interrupted is just over a minute, and the average person checks their phone 150 times a day.

“If you get into a pattern of switching between tasks frequently then over time, that’s going to shorten your attention span,” Dr Searle says.

“That’s a real concern for people who are working in jobs where they need to focus on things for a long period of time.”

Research by behavioural scientist Dr Alan Keen shows that multitasking can also lead to hormone changes in the brain, making people more prone to being aggressive or impulsive.

Instances where multitasking is good

“Sometimes there’s some excess capacity going on,” Dr Foster says, referring to her research of people who are child minding at home.

“If the person is really able to do more, they can use that excess capacity to perform that other task. The total productivity goes up.”

However, Dr Foster warns multitasking cannot be applied positively in all situations, like when you’re doing challenging tasks at work.

“If you’re talking about two tasks that are highly engaging where you really need to focus in order to do the thing well, then trying to combine that with another task is a recipe for disaster,” she says.

Dr Searle says the extent of the impact of multitasking depends on what you’re working on or what job you have.

“If you’re working on interesting projects and switching between them, there are generally positive impacts on your attitudes, on your stress levels,” he says.

“But when you have very high demands on your time, when you’re constrained in your likelihood of achieving some of these goals, then multitasking can be more of a problem.”

How to focus at work

Career consultant Rebecca Fraser says to schedule time for checking emails instead of trying to look at them throughout the day while doing other work.

“The problem we’ve got with work now is that we’ve got a lot of communication avenues, so people can contact us through messages, they can also contact us though email and through the phone,” Ms Fraser says.

“You need to make sure that when you’ve got a schedule in place, that you schedule time for responding to emails and answering phone calls.”

Business coach Suzie Brown says switching off your phone can help prevent you from being called away by text messages or notifications.

“Switch off your phone or computer or switch it to silent when you want to do something,” Ms Brown says.

Ms Fraser says focus on only the important tasks and make a to-do list to maintain your concentration at work.

“We get very lost when we start to get inundated with tasks and we lose concentration if there’s too much going on,” she says.

“Do the to-list, start looking at prioritisation and compartmentalising.”