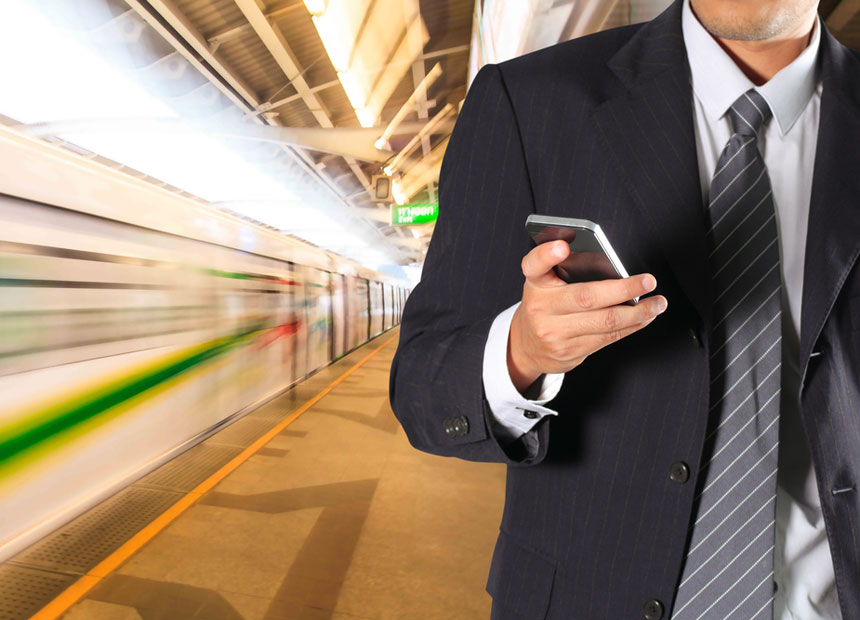 Thousands of Australians commute to work via public transport everyday and spend hours sitting or looking over someone’s shoulder, now you can be more productive with apps that can make you smart.

Recent study of census data released by Mccrindle research showed that 388,012 Australians travelled to work via trains and 301,187 used buses to get to work.

• VIDEO What if Google was a person?
• Google hit with 70,000 requests ‘to be forgotten’
• What really happend in Bali – the luxury travel edition

So why use that time playing a mindless game, when there are so many other great alternatives. We have selected the top apps that you can use to increase your brainpower.

If you have trouble with remembering important dates and names, then this app, used by more than 50 million people, is for you.

By telling the app what you want to improve, each user gets a personalised program.

Does it really work: The scientific research is inconclusive. There have been studies disputing and affirming that games can generalise to other skills and improved mental cognition.

What the users say: I started to see improvement in areas that i had trouble in.

Details: Free for limited basic access, or up to $99 a year. It is available with iPhone, iPad and iPod touch as well as on your desktop.

A free not-for-profit app built by psychologists with expertise in youth and adolescent therapy, mindfulness meditation and wellness programs, it runs off donations from supporters and is designed to help improve the mental health of young people.

Does it really work: The science suggests yes; studies by Harvard and other universities says the “focussing and re-focussing” element of meditation increases brain connectivity and may reduce stress.

What the users say: This app is unreal, really good idea and super helpful when trying to start meditation turning it into a daily routine.

Details: Free, but you can donate to support the program. It’s available on iPhone, iPad, and iPod touch.

Why click away at pointless games when you can spend your commute organising your life – or even better getting an app to organise your life for you?

This app is the digital equivalent of throwing all your files in a shoebox and leaving them there, with the benefit that Evernote actually organises it for you and you can find it again in seconds. Despite the name, it’s not limited to notes, you can upload photos, bookmark clippings from websites, create lists and voice recordings. You can also share and work on documents with other people.

What the users say: I find this app absolutely wonderful for storing all those articles that never want to lose. Easy to use and invaluable.

Details: iPhone, iPad, and iPod touch. This app is optimised for iPhone 5.

Everyone has a story to tell. Some of the best stories of human experience and endeavour are told through The Moth. It has a wildly popular podcast, an acclaimed radio hour in the US and hosts live events where all kinds of people share their stories without notes, all of which is captured in its app. So be inspired.

What the users say: The pod cast is popular for a reason. The Village Voice says it has “the most memorable and hilarious narratives”.

An eidetic memory means to be able to recall images in great detail for several minutes. A handy skill that this app aims to teach using a technique called spaced repetition. It uses items that meaning and context.

It claims that by daily testing and spacing the tests out over time it will help you retain the information in long-term memory, known as the “spacing effect”.

Does it really work: Like other brain training apps, the research here is inconclusive.

What the users say: With enough commitment from the user, this app works wonders.

Learning to code might not seem like a fun way to start the day, but with greater focus on computer literacy – this is literally what the kids are learning. The age range for Lightbot is 9-11-years-old, but that doesn’t mean bigger kids can’t learn to code too. Plus there’s a cute robot. There’s also a junior version for the real little kids.

Does it really work: You won’t be making websites, but its a good intro into programming.

What the users say: So fun for learning programming! The robot is cute too!

Always wanted to learn French/Italian/Spanish/Japanese/Chinese? Or maybe just trying to pick up a few quick phrases before a jaunt overseas. There’s an app to learn the basics of most common languages. Memrise has a range of languages, as well as vocab and other things to learn.

Does it work: As long as you put in the effort, you’ll be able to pick up phrases, vocab and the beginnings of a language.

What the users say: I’ve used about 30 language apps in a few different languages and this is absolutely one of the best.

Details: Free for iOS and Android

Also try: 24/7 Tutor  has most of the major ones, blogger Mondaiji has a list of the best to learn Japanese.

Think you know your trivia? QuizUP will test your knowledge and probably teach you a thing or two. It adds new information weekly, so there’s no chance of learning all the answers. Plus you get to pit yourself against players around the world.

What the users say: QuizUP has been voted the #1 app in nine countries including the US and UK. Enough said.

Details: Free on iOS and Android.

‘I am not afraid’: The modern unknown soldier risks it all in Ukraine
Energy market reform will be a big boost for emissions reductions: Chris Bowen
Greens sign up for Labor’s looming jobs-and-skills summit as Liberals stick with boycott
Joe Biden’s $430b green victory for the environment
China cementing its Thailand ties with joint military exercises
NRL: Titans frantic to end 10-game losing streak as Manly showdown looms
Why university is not essential to success
Today's Stories

Forget Candy Crush! Try one of these apps