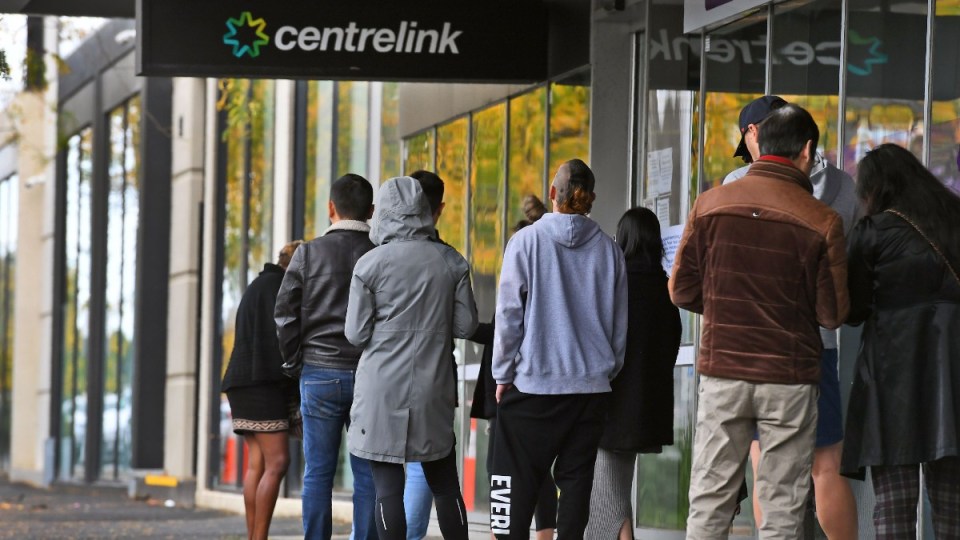 A centre-right think tank has made the case for introducing unemployment insurance in Australia. Photo: Getty

Australia should replace its “fairly meagre form of permanent welfare” with a more generous unemployment benefit that falls to a lower rate after six months, a centre-right think tank has argued.

With only six weeks to go until JobSeeker falls to its pre-pandemic level of $40 a day, pressure is building on the Morrison government to increase the base rate of the payment to stop hundreds of thousands of Australians from falling back below the poverty line.

But a new report published by the Blueprint Institute on Tuesday says there’s a better way to support unemployed Australians than a single-rate benefit system.

“Almost every other rich, advanced country – Canada, South Korea, Israel, you name it – does it differently. They all offer a high initial rate – usually a portion of the former wage – that steps down at some point to a lower level,” the report authors write.

“The high initial rate helps people weather the temporary income shock, and provides them ample opportunity to search for the job that’s right for them and for their employer.”

The think tank says the government should also increase the permanent rate of JobSeeker, arguing that the introduction of the temporary Coronavirus Supplement showed the government understood the current rate was “insufficient to meet basic needs”. Blueprint says the current system serves neither group particularly well, noting that Australia’s unemployment benefit is the lowest among OECD countries in the short term – at just 27 per cent of the average national wage – but middle of the pack in the long term.

“By providing the same payment to all recipients regardless of their fixed financial commitments, JobSeeker fails to adequately cushion the temporary income shock caused by unemployment,” the report authors write.

“And by providing that same payment indefinitely, any attempt to raise the rate to better fill this income gap runs into a trade-off against the desire to prevent long-term unemployment.”

The think tank says the current system offers no way around the trade-off between living standards and work incentives.

Dubbed JobMatcher, their alternative proposal would pay recipients an initial benefit equal to 70 per cent of their former wages – up to the value of $35,000 over six months – before stepping down to the lower JobSeeker rate.

The scheme would be funded by a 1 per cent ‘JobMatcher Premium’ administered in a similar way to the Medicare levy, with all income below $22,801 exempt from the tax.

The payment would be taxable and Blueprint estimates it would cost the government $9 billion a year.

To discourage gaming of the system, the think tank says the initial higher rate would be limited to people who have not claimed unemployment benefits for more than an accumulated total of six months in the previous two years. Blueprint says the two-tiered design taps into a behavioural trait known as loss aversion, which states that people feel the pain of losing something much more than the joy of gaining it.

“The impact of this effect was shown in France, where job search effort increased by 51 per cent in the year prior to a decline in support (from 68 per cent of the average wage to 35 per cent),” the report authors write.

In an interview with The New Daily, the think tank’s chief economist, Steven Hamilton, said the proposal allows the government to raise benefits for people entering unemployment without increasing the disincentive to work, or hurting the government’s bottom line.

“If you focus the support at the short term, then more support actually increases all sorts of economically beneficial outcomes,” Dr Hamilton said.

“It improves job matches, meaning people are in jobs that are better for them and better for the employer, which is a win for business.

“It raises innovation. It raises productivity. It reduces the instance of long-term unemployment, which obviously benefits taxpayers through lower outlays. And in raising worker’s wages, it increases tax revenues.”

Public policy analyst Emma Dawson described Blueprint’s proposal as “a welcome contribution to the timely and important debate about unemployment benefits in Australia”.

“Providing a payment for six months that is more closely aligned to the income lost due to involuntary unemployment minimises the risk of affected workers losing their homes or other key assets before they can find another job,” Ms Dawson, who heads up the progressive think tank Per Capita, told The New Daily.

“It allows people to take the time to find a comparable or suitable position, rather than accepting any work available in order to avoid accessing the punitive unemployment system we have currently.”

Ms Dawson said Blueprint’s proposal would also provide an incentive for unemployed workers to concentrate on finding a job quickly, before their insurance ran out.

But she said introducing the policy would be politically challenging and the most urgent task today was to raise the base rate of JobSeeker, which Per Capita believes should be increased by $250 a fortnight and coupled with “meaningful job creation policies”.

University of Queensland economics professor John Quiggin made a similar point when asked about the proposal.

“Unemployment insurance is a policy option worth considering in the future, but it shouldn’t be a priority at the moment,” he told The New Daily.

“The critical need is for a permanent increase in the basic benefit, once the JobSeeker supplement expires.”