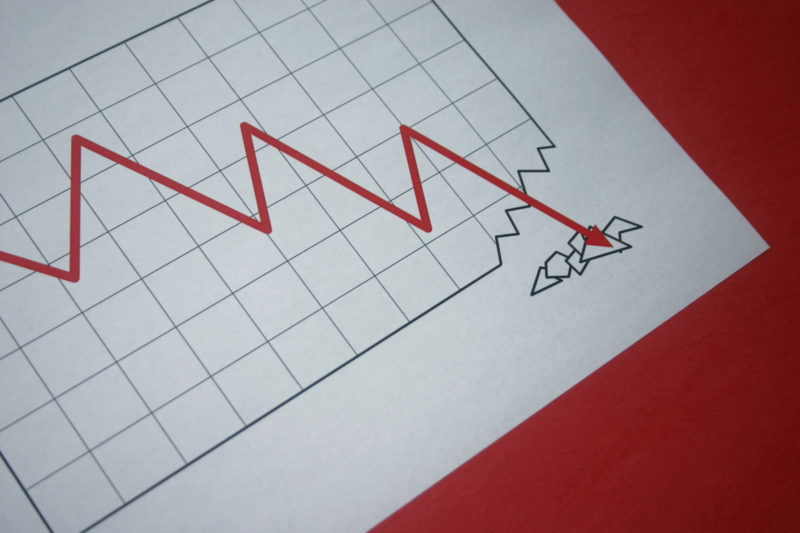 Superannuation returns fell in February and are 1 per cent down since the Ukraine war commenced. Photo: Getty

Research group SuperRatings found that the average balanced fund in accumulation mode slid by 0.8 per cent in February, while the average fund in pension mode was down 1 per cent.

Another researcher, Chant West, reported similar results over February. The median balanced fund, which they define as having 61 per cent to 80 per cent in growth assets, was down 1.1 per cent over the month. 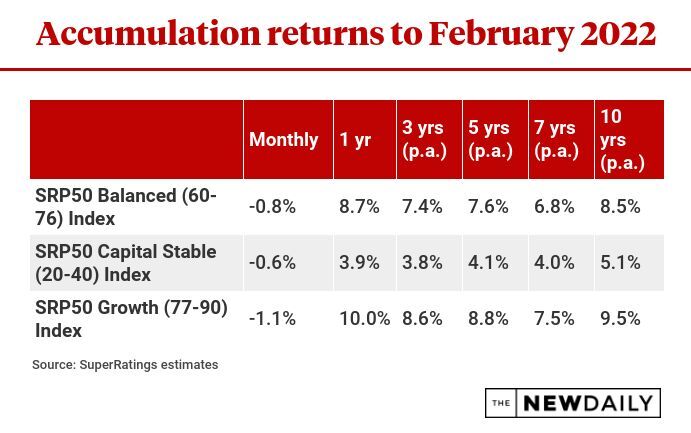 The difference in the measured performance is likely caused by the median Chant West fund having a slightly larger growth-asset exposure.

Growth assets are more volatile, so a larger exposure to them would push funds down by a slightly larger amount in a down market.

“There is a lot of uncertainty across the globe, which is amplifying ups and downs across investment markets,” said SuperRatings executive director Kirby Rappell.

“The latest [oil] supply shock following the war between Russia and the Ukraine places further pressure on the cost of living and inflation levels and adds to the likelihood interest rate rises are approaching.”

Despite the weakness in stock markets since early January – which has pushed down superannuation returns – over the financial year since July 1 the average balanced fund has actually grown 1.4 per cent.

Since the Russian invasion of Ukraine on February 24 the median growth fund is down 1 per cent, SuperRatings found. That means a fund with $100,000 in it would have lost $1000 in value since the war began.

While members will notice what are the first falls in value since March-April 2020 when pandemic panic caused a share market route, the February outcome was better than it might have been.

“Returns have held up a little better than we thought they might have,” Mr Rappell said. 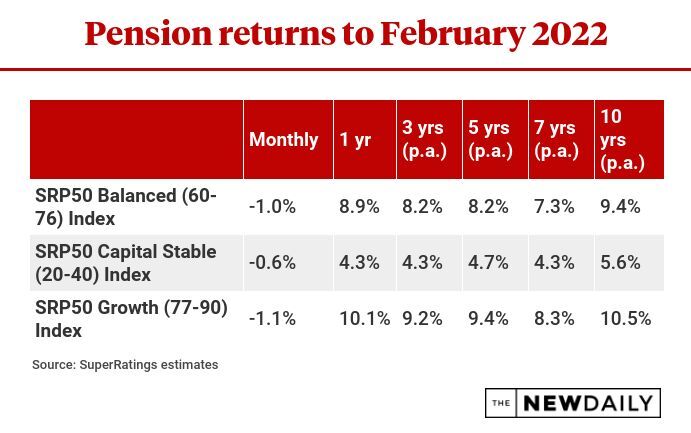 Super funds had greater levels of resilience now than back in the global financial crisis, Mr Rappell said.

That was because, “there are more alternatives sitting in fund portfolios and they take some of the volatility out”, Mr Rappell said.

Alternative assets, which include things like private equity, unlisted infrastructure and unlisted property do not trade as much and their prices are not recorded on a daily basis they way listed assets are.

That means their values hold up better during sharemarket declines.

However, the trend to lifecycle products, particularly in the for-profit retail fund sector, can make funds more volatile for younger members.

That is because lifecycle funds hold up to 90 per cent of growth assets for members during their younger decades and consequently their values fluctuate dramatically with sharemarket volatility.

Also, the traditional downside protection provided in superannuation portfolios by bonds no longer works the way it used to.

“That is due to the fact that interest rates have come down dramatically in recent years,” Mr Rappell said.

Currently, the Australian 10-year government bond pays an interest rate of 2.49 per cent compared to 4 or 5 per cent some years ago, meaning super funds don’t earn much by holding them.

Superannuation balances continue to fall in February with war and inflation