The AIST has called for a raft of super reforms in its pre-budget submission. Photo: TND

At least 70,000 of the 1.5 million women who withdrew superannuation through the pandemic early release scheme did so as a result of family coercion, the Australian Institute of Superannuation Trustees estimates.

And the government should investigate the matter to help protect the super balances of vulnerable people, mainly women, in the future, it said.

The early release super scheme, brought in by the Morrison government in the initial phase of the pandemic, allowed members under financial pressure to withdraw up to $20,000 from their superannuation funds.

But “it was too easy to withdraw,” according to AIST CEO Eva Scheerlinck.

There needed to be “more checks and balances” under the system, Ms Scheerlinck said, as all that was necessary to lodge a claim was  knowing the account number and name.

As a result some withdrawals, particularly by women, may have been driven by coercion from partners who may have even have withdrawn on their partners’ behalf without permission.

Overall the superannuation reform process is still not finished – and the government needs to move to implement further change in the next budget, the AIST said in its pre-Budget submission to the government.

AIST wants the reforms to be aimed at improving the fairness, equity, adequacy and transparency of the retirement savings system.

The body has called for extending APRA performance tests to cover all superannuation products in order to give all members a way to assess their funds’ performance.

“Although our retirement savings system is among the best in the world, the government has a great opportunity with the next budget to ensure it works to the benefit of all Australians, regardless of their gender, culture, education or socio-economic background,” Ms Scheerlinck said.

Currently only default super funds are covered by APRA’s performance test with choice trustee directed funds due to join in July.

However, there is currently no plan to force single purpose products, designed to allow members to build their own super portfolio, to be included. 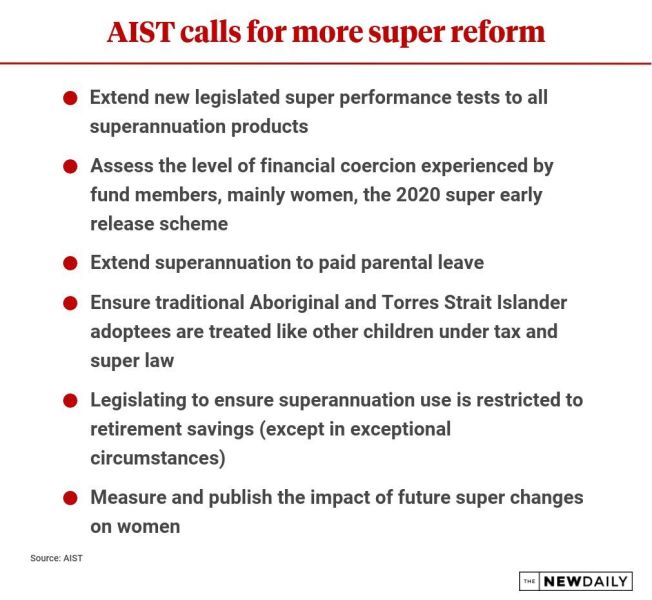 “Bumper super returns in 2021 are good news for those who benefit, but the figures disguise the fact that many Australians are being left behind in their retirement,” AIST CEO Scheerlinck said.

Although vulnerable low income earners may not be getting their fair share under the current system, high income earners, predominately men, were getting the lion’s share of super tax concessions and these need to be cut back, Ms Scheerlinck said.

Other reforms called for included the need to cover indigenous adoption arrangements under tax and superannuation laws.

Current law only allows super to be transferred tax-free after death to those in an interdependent relationship.

Indigenous adoptions under tribal law can fall outside these, meaning such estates, often small, can be taxed at rates of between 17.5 per cent and 32 per cent.

To improve gender equality, all super legislation should also be measured against its affects on women, and penalties for non-payment of superannuation guarantee requirements should be strengthened, the AIST said.

“Paid parental leave is the only paid leave that does not attract superannuation,” Ms Scheerlinck said.

“This particularly disadvantages women who are the overwhelming majority of those on parental leave, and the current policy further exacerbates the gender super gap.”

Many women were coerced into making super withdrawals during pandemic: AIST