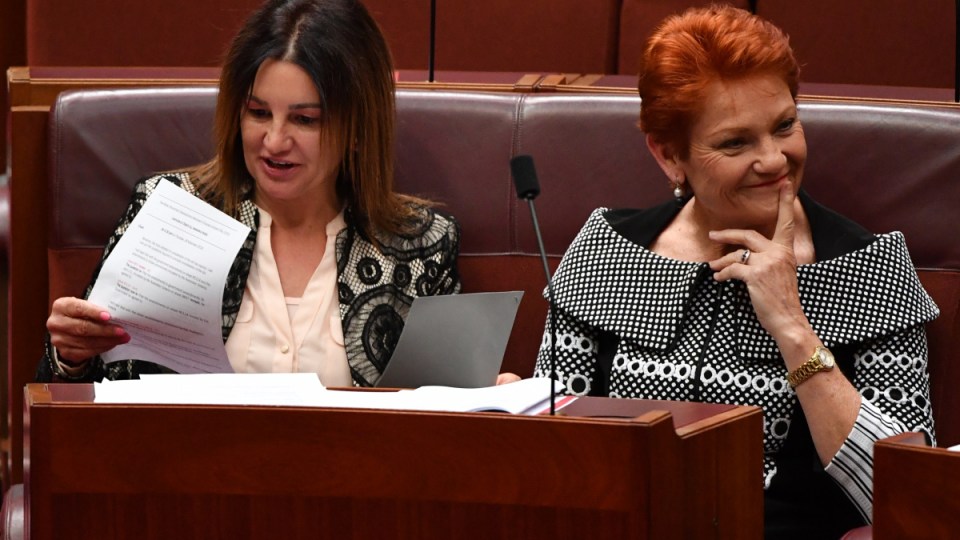 Jacqui Lambie (left) says super reforms are set to pass after the minister made a deal with One Nation. Photo: AAP

Pauline Hanson has been accused of trying to give herself and other older, high-income earners a $1500 tax cut in a late change to a controversial superannuation bill.

Crossbench senator Jacqui Lambie is still holding out as she hasn’t seen the fine print of the changes that would allow more tax-free contributions for those aged 67 and above.

But that’s no obstacle to the overhaul of the $3.2 trillion superannuation pool from July 1, which Labor firmly opposes.

Senator Hanson’s amendment would increase the cap at which a 15 per cent concessional tax rate applies to superannuation contributions by $5000 to $32,500 for people aged 67. The cap then increases by $5000 a year each year until a person turns 71.

A One Nation spokesman said it would allow Australians to increase their voluntary contributions, so someone earning $80,000 a year could salary sacrifice $20,000 without facing additional tax burdens.

People would also be able to make their COVID-19 early access withdrawals without penalties, under Ms Hanson’s proposed amendments.

The government has already removed the contentious treasurer’s veto power over investment decisions.

To avoid the fee drain that occurs when workers, often unknowingly, open many small accounts with each new employer, the bill staples a superannuation product to millions of members.

Superannuation Minister Jane Hume says the reforms will save consumers $17.2 billion over 10 years.

Critics want members’ financial interests protected by mandating that workers can only be stapled to a fund that has passed a performance test.

Without this change the bill could cost Australian workers $230,000 from their retirement savings, according to Industry Super Australia chief executive Bernie Dean.

Pauline Hanson accused of fighting for a tax cut for herself