One of the big stories in superannuation over the past 10 years has been the transformation of the not-for-profit sector into by far the largest single segment of the industry, according to new research from Rice Warner.

And that is a trend that is set to continue as super funds become more sophisticated in the way they manage their businesses, the research group found.

Rice Warner says that as part of that sophistication process most funds will hand over responsibility for the basic administration of accounts to specialists.

This process will include outsourcing transactions processing, unit pricing and member statements, as these are “commodity services with low fees based on volumes”.

Most other services will be self-administered, including the all-important management of investments, which will increasingly be done in house.

The structure will change

Over the past 10 years, the makeup of the superannuation sector has changed dramatically.

Back in 2010 the largest sector in the marketplace was the not-for-profit sector, which includes industry and public sector funds.

At the time, the sector was responsible for 32.2 per cent of total funds under management.

But the self-managed sector was growing rapidly. 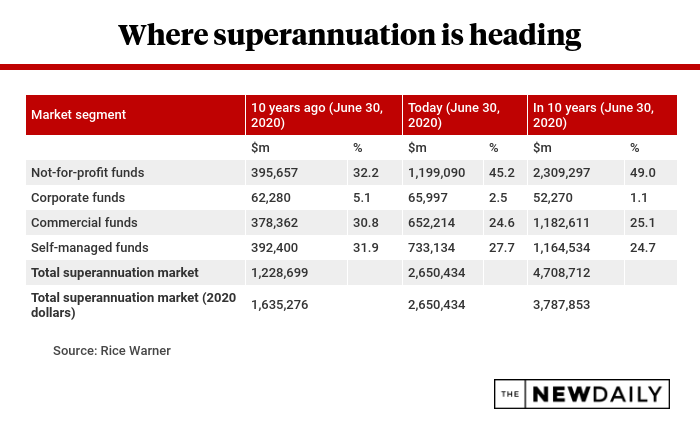 In 2010, self-managed super funds (SMSFs) accounted for 31.9 per cent of funds under management and looked like overtaking the not-for-profit funds.

But by June 2020 not-for-profits had grown dramatically, accounting for 45.2 per cent of the market while SMSFs had declined to 27.7 per cent.

Commercial or retail funds, meanwhile, had declined from 30.8 per cent to 24.6 per cent of the market over the same period.

Although all fund types added to their funds under management over the 10-year period, the relative position of each fund type changed due to several reasons.

First, the growth of SMSFs slowed considerably after the Turnbull government squeezed big balances by placing a $1.6 million cap on tax-free pensions.

Then the Hayne royal commission highlighted the underperformance of the retail fund sector and uncovered illegal and unethical practices in some retail funds.

That saw $31 billion flow out of retail funds, mainly to the industry sector, in 2019.

And Rice Warner predicts those trends will continue.

The retail sector is expected to pick up slightly – increasing its share of funds under management to 25.1 per cent by 2030, or $1.18 trillion.

“Over the next 15 years, the market will grow at a lower rate than the last two decades. Lower fund earnings and slower population growth will lead to a compound annual growth rate (CAGR) of about 3.6 per cent a year,” Rice Warner found.

As the population ages, retirement assets in pooled funds – accounts held by people in retirement – will grow more quickly than the market because they will outstrip growth in the accumulation sector.

“There will be a slowdown in the growth of SMSFs as more of those large funds wind up as their members die,” Rice Warner predicted.

As the industry matures and more people retire, the major funds will set up retirement solutions as a different business “with specialised administration (not yet available), financial advice and product structures that are tailored to members,” Rice Warner found.

Pressure from regulators and demand from members for lower fees will also result in major consolidations in years to come.

That will “lead to a dozen very large funds, most with some degree of in-house investment capability,” Rice Warner found.

And those funds will invest more offshore.

Rice Warner says the big funds are likely to target whole families rather than individual members, while also beginning to offer investment options outside the super sector to members.

The retail funds sector “will be transformed. Legacy products will be converted to MySuper and it is likely that there will be ownership changes,” Rice Warner said.

As a result, the retail super fund sector could fall completely into foreign hands, as is the case today with the life insurance sector.