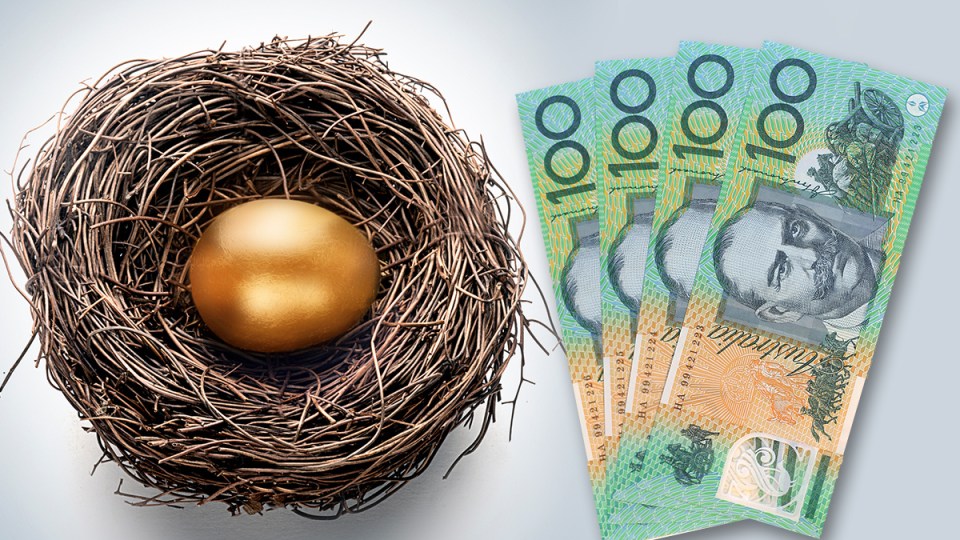 That means the funds invested on behalf of 8.4 million Australian members will not be scrutinised to ensure they make adequate returns.

“If the government doesn’t apply new performance tests to all super funds and products, millions of Australian workers may never find out that their savings are being eaten away by a dud investment,” said Bernie Dean, chief executive of Industry Super Australia.

“Every worker, no matter if they choose a retail or industry fund product, deserves to know how their super fund stacks up so that they can make an informed decision about switching to a better fund.” 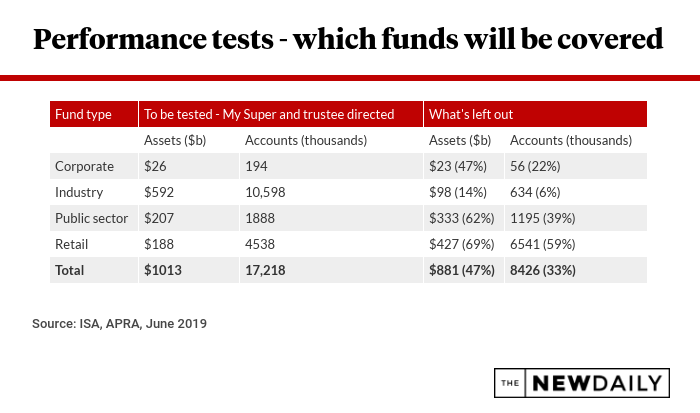 Under legislation due to be voted on by parliament next year, APRA will set benchmarks for super fund performance and notify members if their fund falls below these benchmarks.

If a fund underperforms for two years in a row it will be barred from receiving new members until its performance improves.

From next July, the measure will apply to all default MySuper funds, which have roughy $779 billion in funds under management and cover most workers. From July 2022, the performance tests will be extended to choice funds that are trustee directed.

That definition only covers funds where the trustee directs investments into a range of options. It excludes funds that choose single investment categories such as equities or bonds, as well as funds that run off a platform or large investment base, where members can choose from a myriad of options themselves.

The government has not said if and when those non-trustee directed funds will have their performance reviewed.

ISA said its analysis of the SuperRatings database could only identify $254 billion in trustee-directed products – just 22 per cent of assets in the choice sector.

That would leave $881 billion in choice funds owned by 8.4 million members beyond the remit of APRA’s testing.

That means 8.4 million Australia will not know if their savings are in a dud fund for some years, by which time their retirement prospects could be significantly damaged.

Of the non-tested choice funds, 6.4 million accounts with $425 billion in savings would be in the for-profit retail sector.

The measures mean that not all super fund members will be treated equally, said Kirby Rappell, executive director with research group SuperRatings.

“It’s crucially important that all super funds provide transparency on how on returns being made,” Mr Rappell said.

“There needs to be a test that is consistent and fair across all funds that will provide a holistic view of superannuation.”

Mr Dean said the government should be congratulated for introducing performance tests, but warned the proposed system was inadequate.

When it comes to protecting worker’s savings, we can’t have any carve outs or loopholes that would leave workers stuck in underperforming products,” he said.

“Leaving much of the choice sector and administration fees out of the performance benchmarks means the government is giving many for-profit funds a licence to continue to fee gouge on their members’ savings.”

Mr Dean said the government plan required several improvements. These would include using net returns as a performance benchmark rather than net investment returns as is currently planned.

Basing the benchmark on net returns would provide a more meaningful assessment of performance, as it would include investment and admin fees charged to members.

The current plan excludes them and would therefore create a distorted measure of performance.

The Association of Superannuation Funds of Australia (ASFA) has proposed an alternative regime to measure performance. But critics have described it as “low bar” and the government appears to have ignored it in developing the new legislation.

Xavier O’Halloran, director with Super Consumers Australia, said leaving out core expenses from close  would not be too big a problem for members.

“Even if not all funds are under the performance test a lot will come out in the wash,” Mr O’Halloran said.

“If a fund is not performing well it will become evident to members before very long.”

Assistant Minister for Superannuation Jane Hume did not respond to questions for this story.