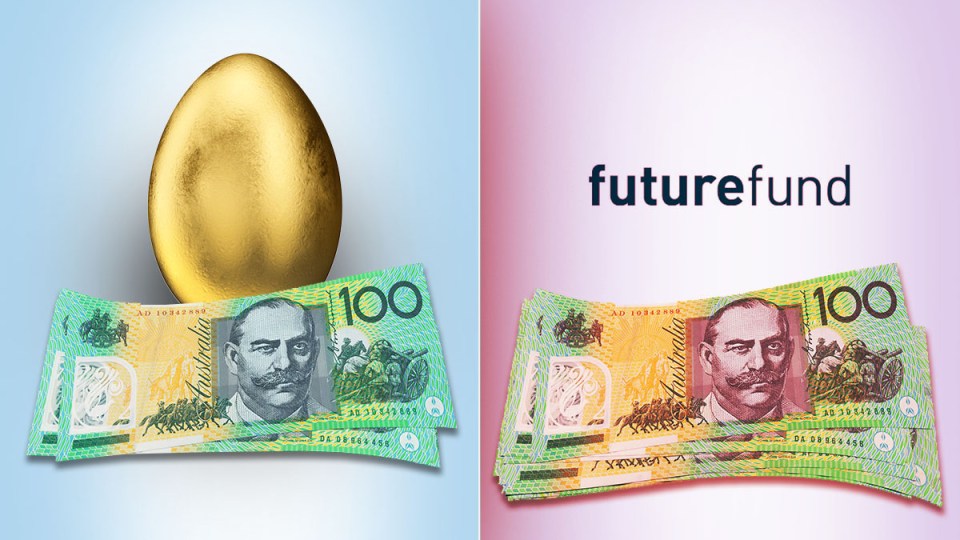 The government’s superannuation reforms aimed at weeding out underperforming super funds through annual reviews will leave $6.1 billion in fees out of their calculations, according to new figures.

Research group Rainmaker found that in APRA-regulated super funds  total fees charged to members account for 1.04 per cent of their balance each year.

And of that, investment management fees account for 0.72 per cent and administration fees 0.32 per cent. 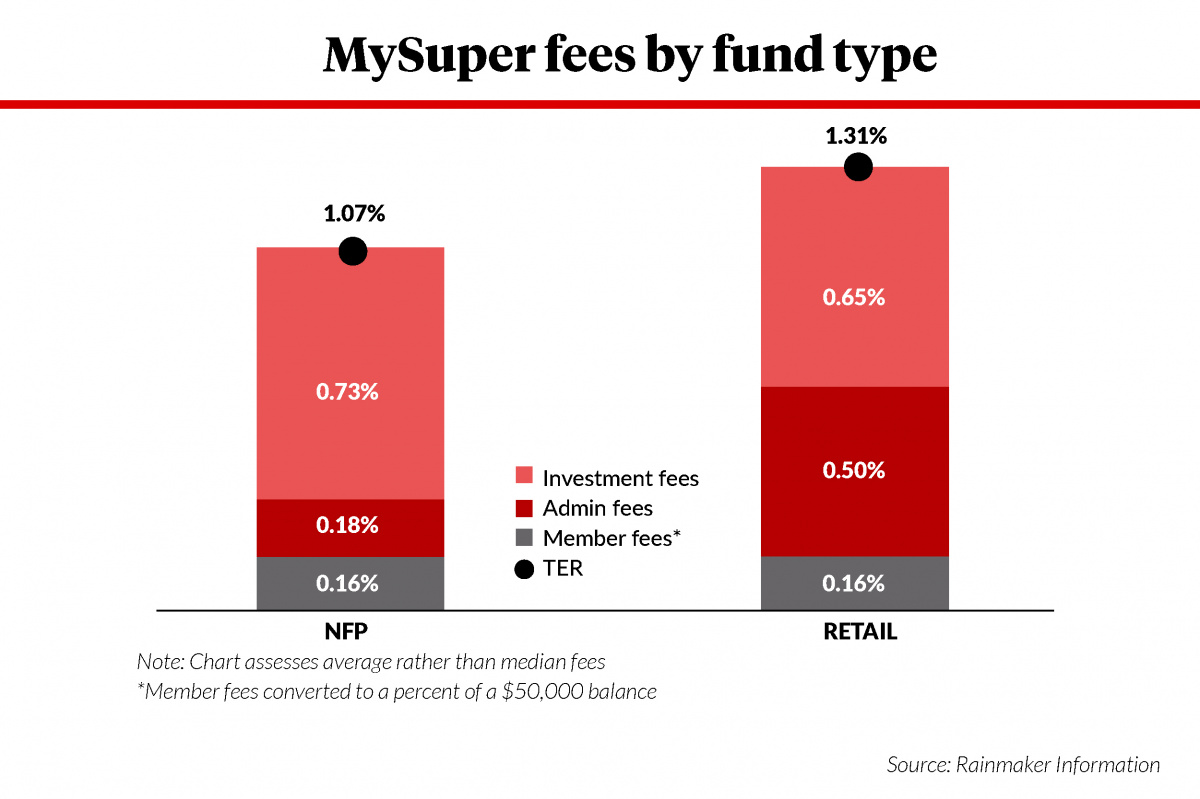 That means a significant amount of fees will be left out of the government’s annual performance reviews, as they have been designed to exclude administration and ongoing advice fees.

This is likely to benefit for-profit retail funds, which Rainmaker found typically charge 0.5 per cent of balances in administration fees compared to only 0.18 per cent across not-for-profit industry and public sector funds.

The government announced the annual performance reviews in the federal budget as part of a surprise reform package that will bar funds from receiving new members if they underperform for two straight years.

An exposure draft of the new legislation is expected soon.

Next year, when only default MySuper funds are included in the performance review, $2.3 billion in admin fees will be left out of the calculation.

Based on June figures, up to $6.1 billion will be left out from the following year when most funds are included.

“We want them to get it right, so that means including all costs and all fund members,” he said.

“It should include all costs and it would be pretty easy to do,” he said.

Fees for superannuation funds have fallen significantly over the past year, though.

So much so, in fact, that the government pays more in fees to the Future Fund (1.13 per cent of the overall balance) than the average Australian pays in fees to superannuation funds (1.04 per cent).

That is despite the fact that super funds service 13 million members with reports, contributions and withdrawals and investment options, while the Future Fund reports only to the Commonwealth, which is not yet making withdrawals.

“I don’t know why the Future Fund is a laggard although they have cut their fee costs in recent years,” Mr Dunnin said.

Two years ago the Future Fund’s fee costs were 1.57 per cent of the portfolio, well above the current 1.12 per cent. 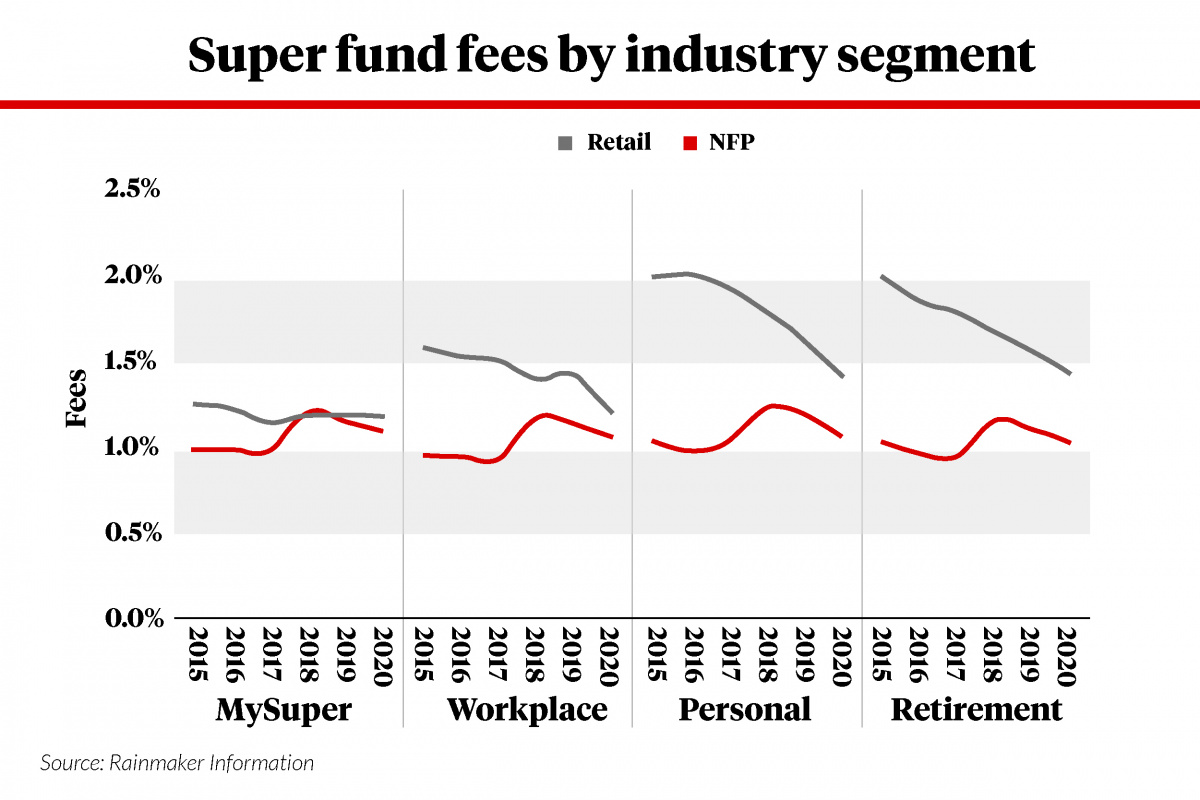 Meanwhile, Rainmaker’s research found that over the 2019-20 financial year, the average fee level on a super fund fell by 7 per cent as a percentage of fund value, and by 5 per cent in dollar terms.

And against overall GDP, super fund fees fell by 11 per cent – meaning their cost in relation to the size of the economy shrunk significantly.

“While super fund fees have fallen, there is still a long way to go,” Mr Dunnin said.

“The sharper funds are running with fees of 0.5 per cent or 0.6 per cent, while there are still a few funds charging as much as 1.5 per cent.

“To charge those really low fees of 0.5 per cent you would have to give up some things. You’d probably have to just follow the market indices so you couldn’t have direct holdings in infrastructure, private equity or building,” Mr Dunnin said.

That in turn would result in lower returns, which could nullify any benefits from lower fees, he said.

Overall superannuation charges totalled $29.6 billion in a super fund pool worth $2.86 trillion as at June 30.

The pool of super savings dropped 1 per cent over the year because of the pandemic.

Superannuation fees have fallen, but government changes will distort costs