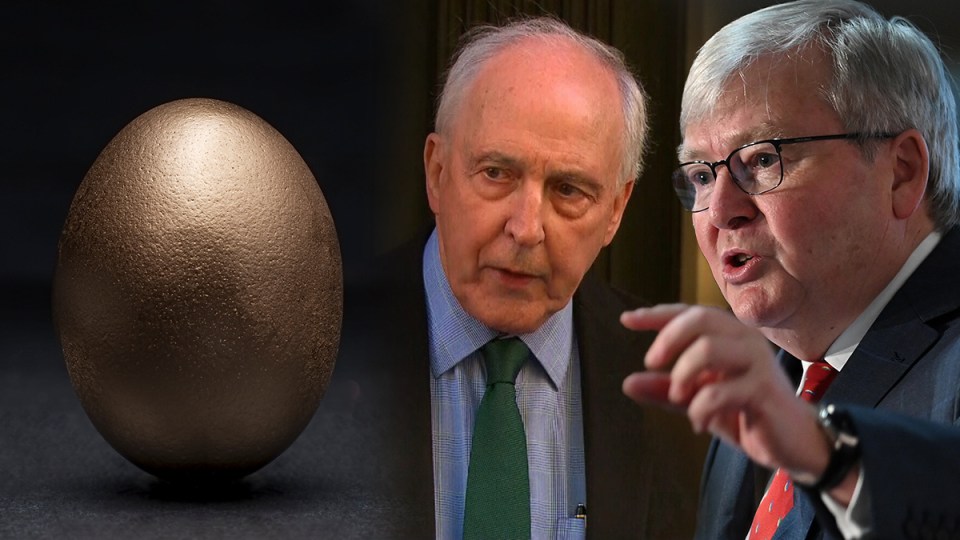 Paul Keating and Kevin Rudd have slammed the Coalition for attempting to destroy superannuation. Photo: TND

Two Labor heavyweights have slammed the Coalition for exploiting the coronavirus crisis to attack compulsory superannuation.

Amid heated public debate over the future of compulsory employer contributions, former prime ministers Paul Keating and Kevin Rudd held simultaneous press conferences on Monday afternoon, to accuse the Liberal Party of using the crisis as cover to realise its ambition of dismantling superannuation.

The Superannuation Guarantee (SG) is legislated to rise from 9.5 per cent of wages to 12 per cent by July 2025, starting with a 0.5 percentage point rise in July 2021.

But Mr Keating, who set up compulsory superannuation in 1992, told reporters outside his Sydney home that the government wanted to destroy the entire system.

“Superannuation is a bit like a bath,” he said.

“The water in the bath is the savings. So the government has taken the plug out of the bath – we’ve now already lost 40 billion in [early withdrawals].

“And then they’re turning the tap off at the top of the bath – to stop the actual two and a half per cent of super coming in.”

At the same time in Brisbane, Mr Rudd fronted cameras outside his home to accuse the Morrison government of a “cruel assault” on the retirement savings of working people – saying it had forced workers to “rip out” money from their superannuation by failing to develop “an economic policy alternative”.

In light of Australia’s descent into recession, Prime Minister Scott Morrison and Treasurer Josh Frydenberg have said they are considering deferring the SG hikes to preserve wages and boost spending.

“This is a really bad idea.”

The coordinated press conferences came after a monthly survey of economists by The Conversation found that 46 per cent believe next year’s legislated increase in the Superannuation Guarantee (SG) should be deferred and 20.5 per cent believe it should be abandoned.

The Reserve Bank and Grattan Institute think tank have taken a similar stance – with modelling from the latter suggesting that 80 per cent of any SG increase would come from future pay rises.

But Mr Keating said such theories were based on a misunderstanding of how the world works and at odds with real-life experience – a point also made by public policy think tank Per Capita.

“If workers don’t get two and a half per cent over five years under the superannuation guarantee, they’ll have no increase in real wages,” he said.

“The wages system has not delivered any [real] growth since 2012.”

During the media conference, Mr Keating handed out a release with data from the Australian Bureau of Statistics showing labour productivity has increased by nearly 10 per cent since 2012, but wages, after accounting for inflation, have flatlined.

“And then it shows in the grey line, it shows unit labour cost falling, that means profits rising,” he said.

“So what we’ve seen is that working people have contributed just on 10 percentage points of labour productivity since 2012, and none of it has gone to wages. Zero.”

Mr Keating made his remarks after the financial regulator, APRA, revealed Australians had made 3.1 million early superannuation withdrawals totalling $32.2 billion as of August 23.

Industry groups expect total withdrawals to reach $42 billion – or roughly 1.5 per cent of the nation’s retirement savings – before the scheme ends on December 31.

They say deferring the legislated hikes will not only make it harder for members to rebuild their savings after taking out as much as $20,000 each, but also make it harder for funds to contribute to the economic recovery by reducing their investment power.