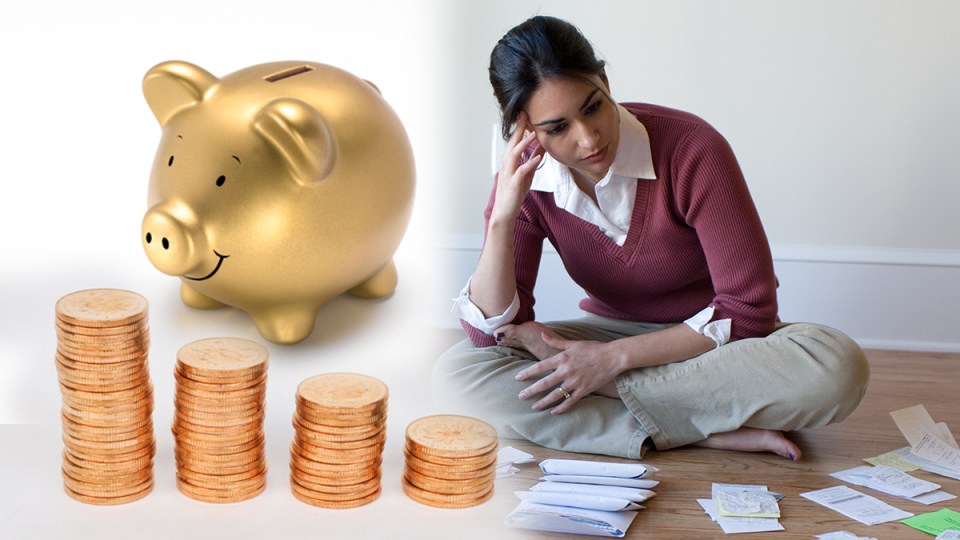 Younger women have emptied their super as the COVID-19 bills stacked up. Photo: TND/Getty

The government’s early superannuation release scheme was badly planned and should have been introduced after JobKeeper to reduce the number of people applying, an industry expert has said.

“If they introduced super withdrawals after JobKeeper, people would have had a better idea of their financial situation,” said Dr David Knox, principal with superannuation consultancy Mercer.

“If they knew that JobKeeper and JobSeeker were on the way, there would have been a greater reluctance to withdraw super.”

JobKeeper gave people in businesses affected by the pandemic $1500 a fortnight and JobSeeker almost doubled the unemployment benefit to $1115 a fortnight, thanks to a temporary Coronavirus Supplement.

“Early withdrawals were needed by some people, but I don’t think it was needed for the 2.3 million people who have applied so far,” Mr Knox said.

According to financial regulator APRA, withdrawals had topped $17.1 billion by June 21.

And new research from Industry Super Australia estimates that more than 480,000 members have completely emptied their super accounts in the first tranche of the scheme, with about 15 per cent of workers making early withdrawals. 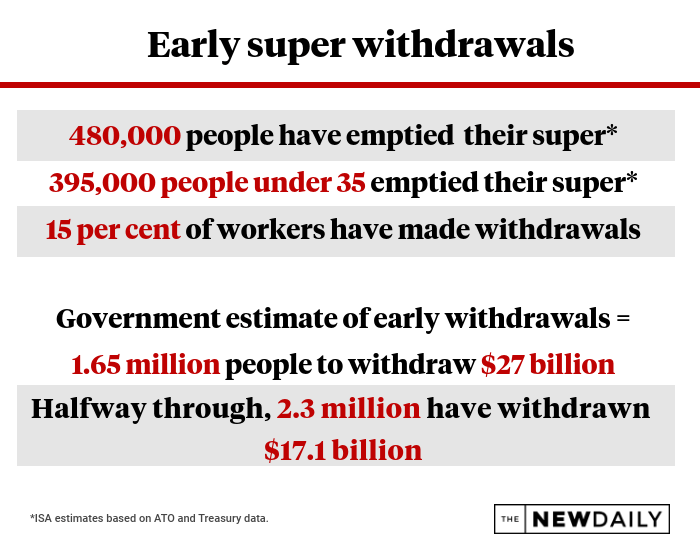 Although some 15 per cent of workers have made super withdrawals nationwide, tourism-dependent Queensland (20 per cent) and the Northern Territory (19 per cent) recorded the highest levels of withdrawals.

A further $10,000 is available to be withdrawn under the early release measure between July and September 24, and ISA said in a statement that given the numbers so far “it appears likely demand will far surpass forecasts”.

“The numbers will likely be lower for a few reasons. If a significant number of people have withdrawn all their super, then there is nothing for them to take in the second tranche,” he said.

“The criteria for making withdrawals have been self reported and that will be the same in the second tranche. But the ATO is cracking down and rather than just allowing a withdrawal to go through, they might start asking a few questions.”

Given that 40 per cent of people who have accessed the scheme have reportedly not suffered a drop in income, such a move by the ATO, which has threatened fines of $12,600 for any misleading statements, may frighten off those wanting to misuse the scheme, Dr Knox said.

HESTA CEO Debby Blakey told an online conference on Tuesday that 62 per cent of her fund’s female members asking for withdrawals had drained their funds and had predominately been low-income earners.

“This is quite critical as the super gap in retirement is already at 40 per cent for women and 80 per cent of our members are women,” Ms Blakey said.

Dr Knox said the Australian scheme was badly designed compared to others.

“Other countries did it, but except for the US, their schemes were more limited and were based on wage levels over time,” he said.

“Our scheme may have been a bit quicker for those who needed it immediately, but it may have resulted in more people claiming it who did not need to.”

The effect of withdrawals by younger people would be particularly damaging, according to ISA CEO Bernie Dean.

“Those early contributions are like yeast. Without them you’re left with a much flatter nest egg,” Mr Dean said.

“To have hundreds of thousands wiping their savings out midway through their life is a tragedy waiting to happen and it will affect everyone.

“Every Australian deserves a good life in retirement, not just scraping by on the pension.

“The Prime Minister and Treasurer must stick by their promise to increase the super rate because it’s critical to helping these people rebuild savings they’ve wiped out, and avoid tax hikes on working people to prop up more people drawing a full pension.”