How early withdrawal could cripple your superannuation earnings

Early withdrawal of superannuation under the government’s $20,000 drawdown scheme could slice as much as $100,000 from the final balance of young super fund members, new research has claimed.

A 20-year-old member withdrawing $20,000 under the government’s new provision could retire on $120,000 less than they otherwise would have, according to a research paper from Industry Super Australia.

The government’s measure allows members who are suffering hardship as a result of losing a job or income to take out $10,000 before June 30 and a further $10,000 in the first quarter of the next financial year. 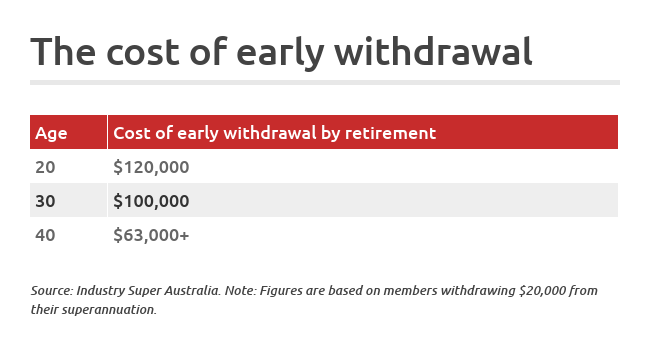 “For someone in their 40s, the reduction in the retirement balance would be around $40,000,” said Alex Dunnin, director with research group Rainmaker.

Council on the Ageing chief executive Ian Yates said super withdrawals should only be made if all other options had been exhausted.

“For God’s sake don’t take money out of super, especially if you are young. Make sure you exhaust other options first,” Mr Yates said.

There were mixed views on whether super funds could handle widespread withdrawals of up to $20,000.

Shadow Assistant Treasurer Stephen Jones said “there is a significant risk that I don’t think the government has fully considered in its assessment that the funds will be able to cope with this”. 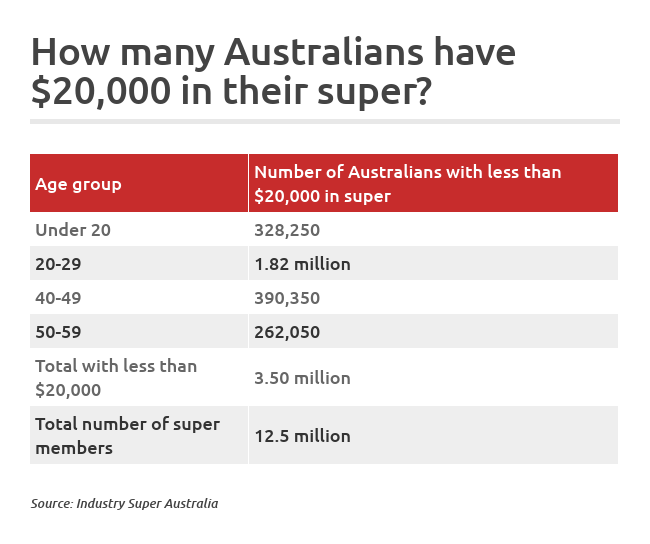 “The government is assuming 1.6 million people will take out an average of $16,000 over 12 months, but they’ve only got to be a little bit wrong on how many people withdraw, and when and how much and from which fund and there could be problems,” Mr Jones said.

Withdrawals could cause problems for funds because they would have to find the necessary cash to pay out members.

If they don’t have adequate cash stocks on hand they would have to liquidate market assets at fire-sale prices.

“That would mean other members who choose to stay would be getting a worse result,” Mr Yates said.

“If any funds experience liquidity problems because of the early withdrawal measures, then the government should bring in measures of support like they have done for the banks,” Mr Jones said.

“If the funds have to liquidate in these times they are doing it at the bottom of the market.”

Treasurer Josh Frydenberg said he expected the super funds to be able to cope with withdrawals.

“APRA, the prudential regulator, has advised the government that they do not expect this initiative to have a significant impact on the industry overall,” Mr Frydenberg said.

“What we’re talking about is less than 1 per cent of the funds that are currently under management in superannuation.”

“This is the people’s money and this is the time they need it most,” Mr Frydenberg said in a statement.

The super system was likely to be able to deal with any withdrawals under the measure, Rainmaker’s Mr Dunnin said.

“In the past five years to 2019, early release of superannuation amounted to $2.9 billion by 361,000 account holders who took out an average of $8000. Hardly the volume to threaten the superannuation system, albeit for some low-income people it could be most of their super savings.

“The $10,000 per year the government is now allowing due [to] COVID-19 is about 25 per cent higher than the $8000 average release. Treasury anticipates these provisions may extract 1 per cent of the superannuation system, about $27 billion,” he said.

The funds would be able to cope with that, Mr Dunnin believes.

Don’t go back to zero

“Members need to tread carefully before they think of cracking open their retirement nest egg as it comes at a steep price – often more than six figures,” he said.

“For millions, the government early release scheme could allow them to wipe out their super balance, meaning they have to start again.

“Completely eroding your balance could take years or even decades to recover from.

“Members should only tap into their super as a last resort because you can really lose out in the long run.”

The industries still hiring amid the coronavirus pandemic
Today's Stories

How early withdrawal could cripple your superannuation earnings