With Australia’s population growing at record rates, housing affordability  a rising problem in most major cities, and public housing builds at a low point, housing advocates are looking for new possibilities.

The industry super fund movement is emerging as one of the solutions to affordable housing needs and it is largely doing that without government subsidies.

First State Super is one group stepping up to the breach, with $200 million invested in worker housing in Victoria and NSW. Its latest move in January has seen it purchase a 55-unit residential development in the Melbourne suburb of Moonee Ponds, six kilometres from the CBD.

The rental properties will be available for key workers (healthcare, aged care, disability services, teachers, law enforcement, emergency services, childcare and associated industries) to rent at 80 per cent of the market rate for the area. They will provide affordable options close to workplaces, the CBD, and facilities like hospitals and schools.

“Nine out of every 10 hospital workers in Melbourne live more than four kilometres from their work and face an average commute time of 47 minutes, 32 per cent longer than the state average,” First State CEO Deanne Stewart said in a statement.

“For health and social service workers in Melbourne, that commute time increases to 56 minutes, 38 per cent longer than the state average for their industry.”

The project will be self-funded and will not rely on a government subsidy.

First State said its key worker affordable housing portfolio achieved returns over its benchmark rate of CPI plus 5.0 per cent.

Another development at Miranda, south of Sydney, will be commenced shortly and includes a building dedicated to affordable housing.

Back in the 1950s, governments built up to 15,000 social housing units a year, when the population was far lower than today. 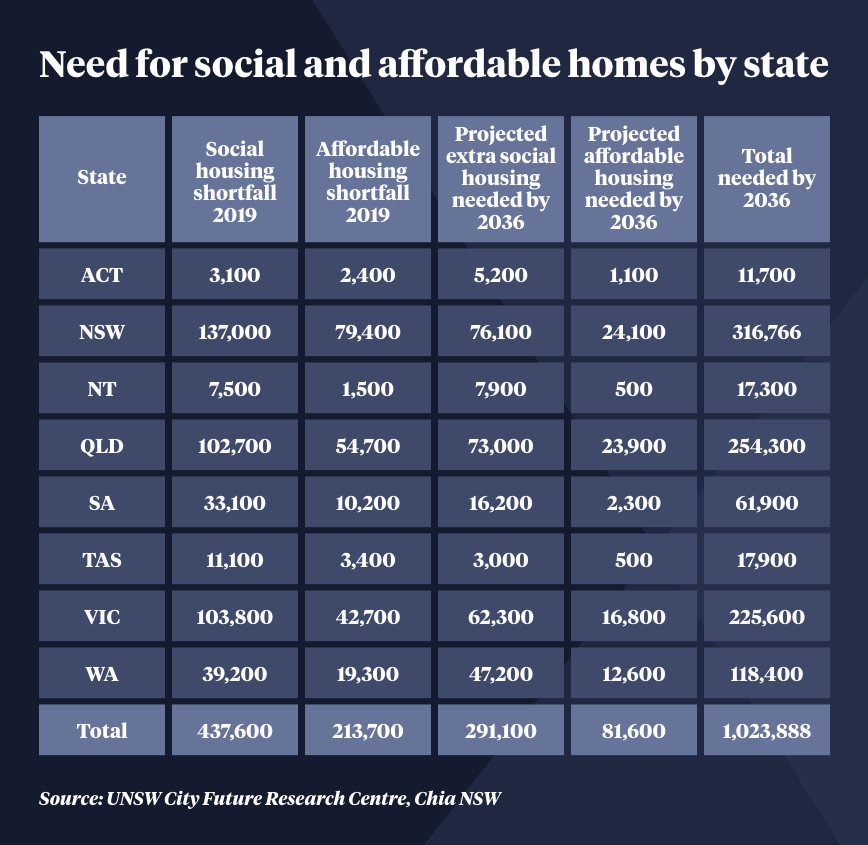 HESTA, an industry fund targeting the health and community services sector, last August made a $20 million joint venture investment in a development in Brunswick, in Melbourne’s inner north. The project, in conjunction with community housing group Nightingale Housing and not-for-profit Social Ventures Australia, will consist of 185 apartments in six buildings on a former warehouse site.

Twenty per cent of apartments in the project will be rented to key service workers, such as nurses and professionals operating in the aged care and not-for-profit sectors.

A further 20 per cent have been pre-sold to community housing operators to provide affordable housing to eligible tenants.The remainder were sold to the general public, many of whom are first home-buyers.

A HESTA spokesman said housing investments needed to deliver a market return equivalent to that made in fixed-interest, while also providing a measurable community benefit.

The issue raised $135 million to be on-lent to community housing projects, in deals subsidised by the Commonwealth with interest rates of just 2.07 per cent.

“As the leading super fund for the building and construction sector, we are pleased to invest in NHFIC bonds that meet our investment risk-return criteria and fund new housing construction for Australians in need,” said Cbus CEO David Atkin.