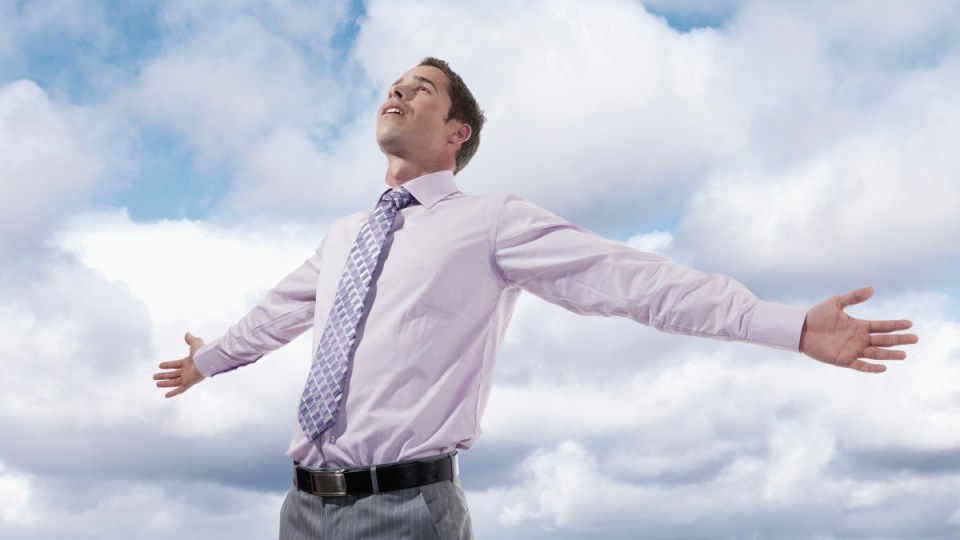 Most Australians saw their super funds return 14 per cent over the year so far, with hopes high for a double-digit end to 2019.

A two-figure return for the 2019 calendar year for the growth option chosen by most fund members would mark the tenth positive year of returns in the last 11 years, according to research house Chant West.

“It has been a terrific year for super funds with a double digit return on the cards for the median growth fund, where most Australians have their money invested,” said Chant West senior researcher Mano Mohankumar.

“The performance so far is significantly better than what we could have expected at the start of the year after the December 2018 quarter when growth funds lost 4.6 per cent  and investor sentiment was decidedly negative.”

The high performance has been driven by strong returns on global stock markets.

Australian shares were up 18.9 per cent for the calendar year while the US Dow Jones Index was up 19.2 per cent and the UK FTSE index was up 7.1 per cent despite concerns around Brexit.

Mr Mohankumar said the 2019 returns were “great news for super fund members” but he advised them “not to get carried away.”

“The returns that funds have delivered since the end of the GFC really aren’t sustainable over the long term, and we expect more challenging times ahead.” 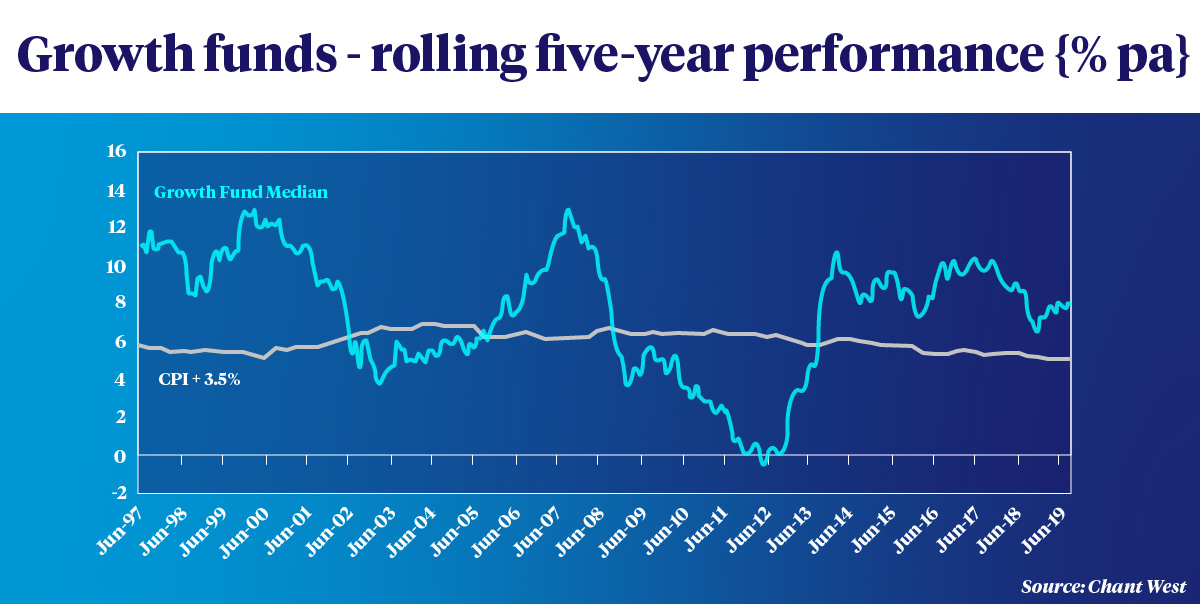 As the above chart shows, super funds have been performing well above the return level of the consumer price index and 3.5 per cent that planners of the system originally targeted.

“Given the tremendous run investment markets have had for over a decade, most asset sectors are fully valued or close to it,” Mr Mohankumar said.

The global economy was still threatened by trade wars, Brexit and slow economic growth that governments seem unable to respond to, he said.

While returns have been very strong since the global financial crisis it is well to remember that during the GFC funds lost 21.5 per cent and it took some years for balances to recover from that setback. 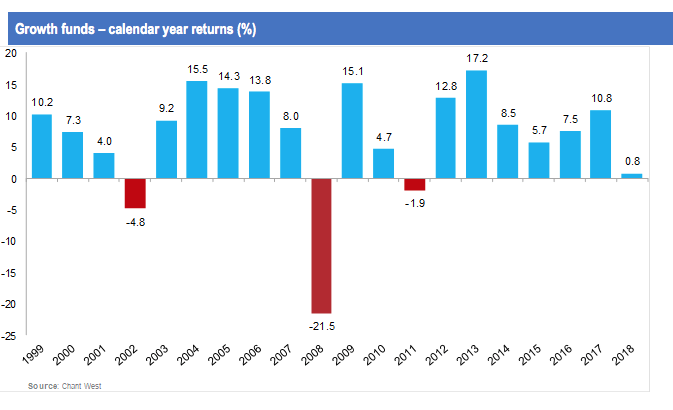 But super funds have since restructured their asset balances to make them less vulnerable to collapses in the share market.

They now have increased exposures to unlisted assets like infrastructure and hedge funds that do not follow share prices and should help protect members if sharemarkets take a dive due to the issues Mr Mohankumar pointed to.

The most significant change has been the reduced exposure to Australian shares.

Back in 2006 Australian shares accounted for 32.2 per cent of the average growth fund’s portfolio whereas that has fallen to 24.8 per cent in 2019, according to Chant West.

There was also a significant 5 per cent fall in the exposures to fixed income that put the total back at 14.6 per cent.

Those lower fixed income exposures mean that retired members are less exposed to bond interest rates which have collapsed in recent years.

In Europe, a heavy reliance on bond income has led to retirees suffering unexpected income cuts, Nine Newspapers has reported.

“Whatever the outlook, Australians should take comfort that their superannuation is generally invested in well-diversified portfolios with investments spread across a wide range of asset sectors,” Mr Mohankumar said.

“The typical growth fund has more resilience built in than it did a decade ago, so it is better positioned to weather a period of investment market weakness if that eventuates.”