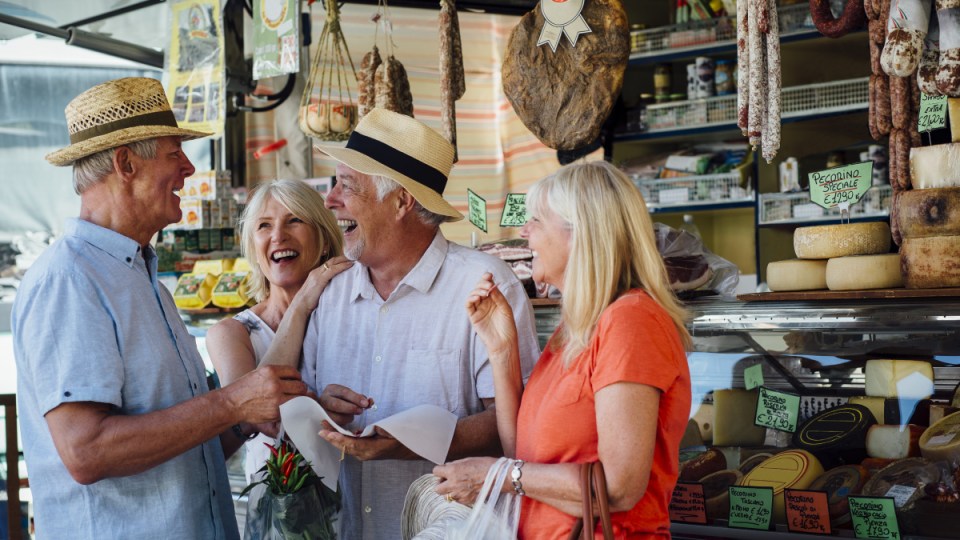 Australian retirees are doing better out of their superannuation than those still working, according to research group SuperRatings.

The revelation comes from newly published tables that show super continues to grow at double-digit figures and returns for the calendar year are likely to be as high as 12 per cent.

SuperRatings found average returns for balanced funds were 13.15 per cent for the 10 months to the end of October.

The raw average for growth funds was 15.4 per cent and for capital stable funds it was 7.7 per cent. 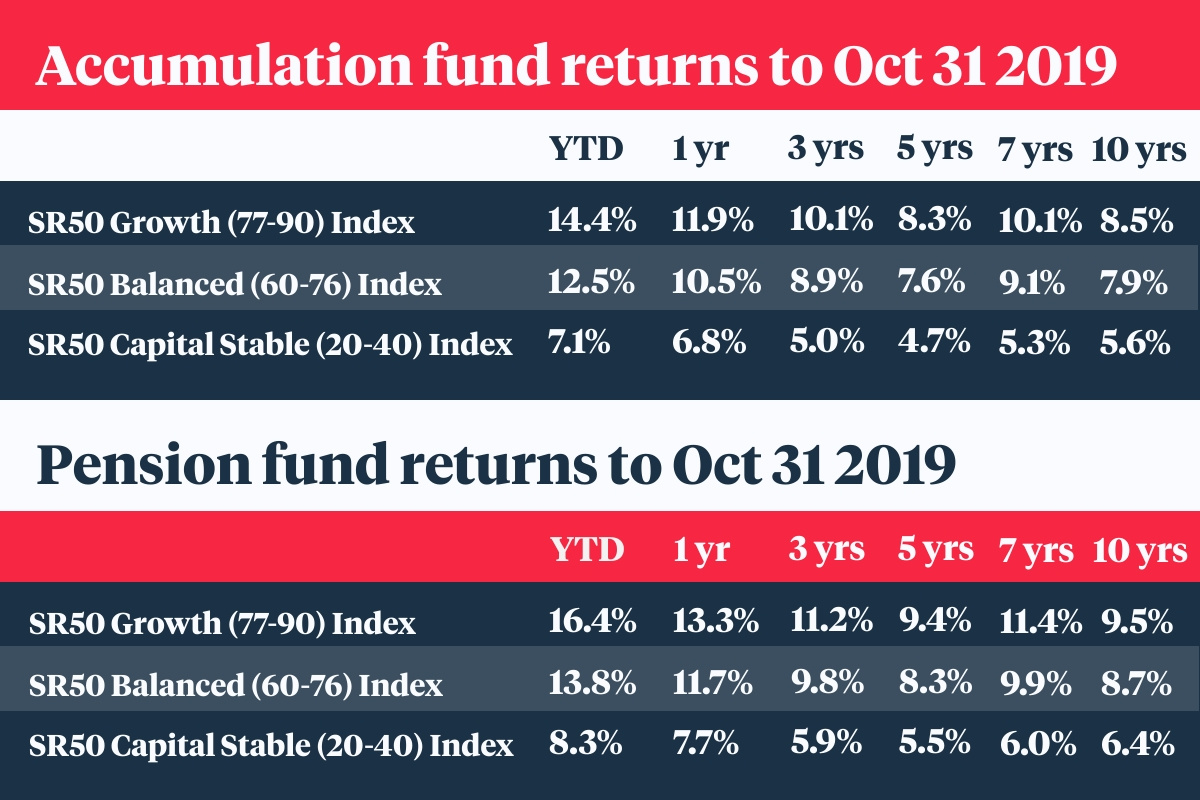 However, SuperRatings broke returns down into those achieved by funds in the accumulation phase where members are still working and contributing, and pension phase where retirees are living off their super savings.

That breakdown found that pension funds earned significantly higher returns than those in accumulation.

For balanced funds, the year to date figure was 12.5 per cent for those in accumulation, and 13.8 per cent for pension accounts.

For growth funds it was 14.4 per cent for accumulation and 16.4 per cent in pension.

In all categories over all time periods, pension funds easily outdid accumulation funds.

Strong returns over 2019 followed a significant slump in the December quarter of 2018.

“This year has provided further solid evidence of the ability of super funds to deliver for their members through a challenging market environment,” said SuperRatings executive director Kirby Rappell.

Mr Rappell told The New Daily that the difference is about tax.

“When a fund is in the accumulation phase it pays a 15 per cent tax on earnings in the fund, while in pension phase earnings are untaxed,” he said.

“That accounts for the difference in returns as most accounts remain in the same asset allocations when they move into pension mode,” Mr Rappell said.

“It means people could move to a more conservative option but not suffer a reduction in returns,” Mr Knox said.

“Alternatively, rising returns in pension phase could work against the effects of drawdowns. Also a person on a part age pension could increase their risk appetite and if it it goes well, that would be good. If it didn’t go well, then the government would provide more age pension.”

Where is the money?

Having said that there has been a significant shift in asset allocations over the 10 years to October 2019 with more funds focused on non-market investments.

Over that period Australian shares moved from providing 29.2 per cent of total superannuation investments to 25.4 per cent. 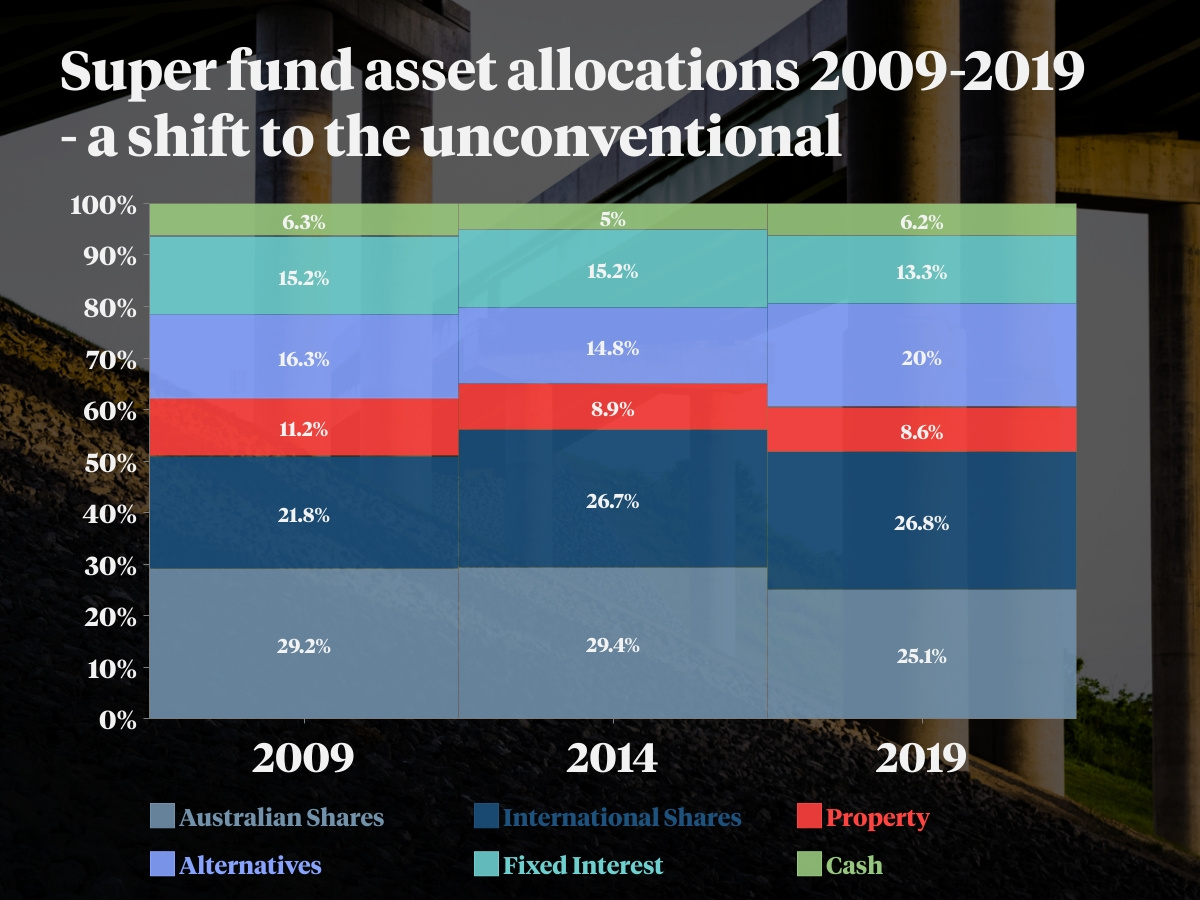 Alternative investments – including infrastructure, private equity and hedge funds – moved from 16.3 per cent of portfolios to 20 per cent.

International shares have also grown in importance, accounting for 26.8 per cent of superannuation investment in 2019 compared to only 21.8 per cent back in 2009.

The changes are based on the need for diversification as the superannuation pool grows.

“Australian shares can’t be the only solution,” Mr Rappell said.

“Public offer funds have to compete to get returns, so they are looking to find new options and it’s a big challenge to find options that others don’t.”

The move to new options is driving up the costs of some unlisted funds but also encouraging the emergence of new investments, Mr Rappell said.

“These assets tend to be less liquid. They can play an important role for funds looking to generate income while managing risks for their members in a world characterised by low yields and growing uncertainty,” he said.

Until recently the industry fund sector dominated the unlisted alternatives sector, often because they could invest collectively and had a growing young membership which meant they did not have to liquidate investments to pay out retirees.

However for-profit groups like Mercer and AMP “are increasingly accessing the market for alternatives”, Mr Rappell said.

“Alternatives can help protect capital under certain market conditions, but they can also be used to boost returns by taking on some additional risk.

“We generally think the shift to a broader asset allocation is positive, but funds should not be complacent in ensuring risk is appropriately managed.”

How retirees are making more money than workers in their superannuation