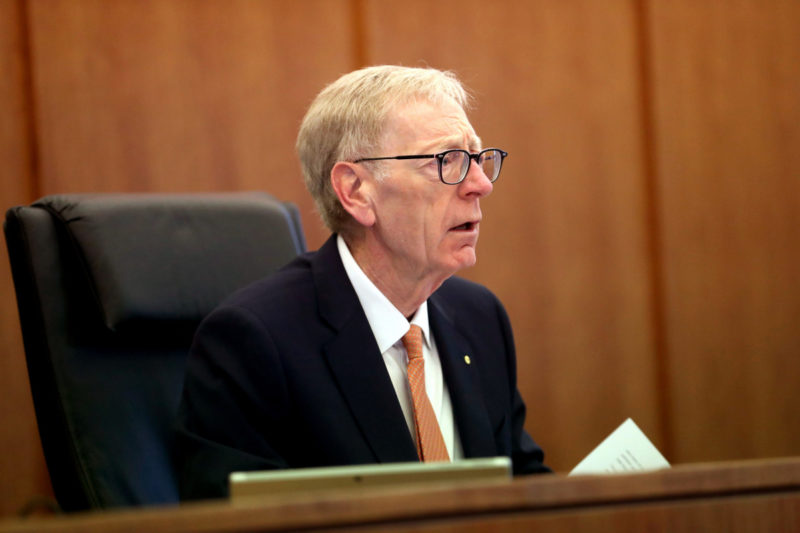 Kenneth Hayne and his royal commission chased money out of retail funds. Photo:AAP

The for-profit retail superannuation funds suffered a $10.9 billion outflow in members funds during 2018, as the banking royal commission highlighted scandals and fee rorts in the sector.

That money appears to have flowed into the industry fund sector which recorded positive flows of $11.7 billion for the year. That figure is only slightly more than the outflow of the retail funds, suggesting money shifting from the retail to the industry sector as members of retail funds lost confidence.

Members withdrew their funds through 2018

The latest figures, produced by super regulator, the Australian Prudential and Regulation Authority, demonstrate that there were negative flows across the for-profit retail sector for the whole year. They peaked in the September and December quarters with outflows in both quarters outstripping the entire outflow for the year in 2017.

How net contributions looked in the latest APRA figures

The peak in the second and third quarters coincided with the high-publicity parts of the financial services royal commission when evidence of AMP lying to regulators about its misconduct lead to the resignations of CEO Craig Meller and chair Catherine Brenner. The period also highlighted criminal behaviour by the banks like charging fees to the dead and fees for no service to living customers.

The flow from retail funds reached its height in the September quarter when the industry funds gained inflows of $4.1 billion while the retail funds lost $3.7 billion in outflows from members.

Industry fund Australian Super, the country’s largest (worth $145 billion), reported inflows of $6.7 billion in the half to September 2018 compared with $4.6 billion a year earlier. The 49 per cent increase was put down to the effects of the royal commission.

The outflows from the retail sector have heightened its relative decline in recent years. Once the largest single sector of superannuation, the sector had been losing about 1 per cent of market share every two years according to research group NMG.

The self-managed super fund sector, which became the biggest in recent years, still lead the way with $726.5 billion under management in December. However, the asset base of SMSFs declined slightly over the year due to their heavy equity exposure suffering in a weak share market late in the year.

The weak share market affected the whole super sector with assets under management declining with the share market in the last quarter. That led to small losses for the pooled fund sector for December, but in the early stages of 2019 a market bounce has pushed returns into positive territory. 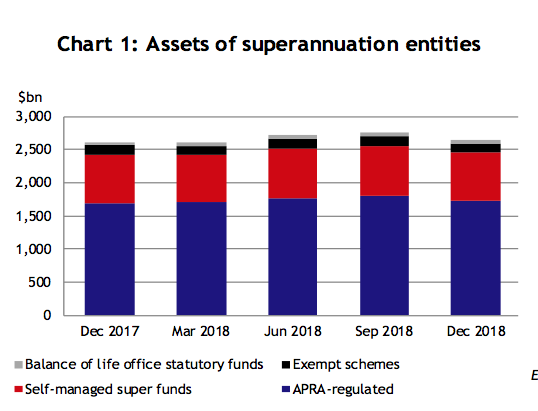 Over five years, industry funds have performed even better with the top 20 returning between 9.1 per cent and 10.3 per cent.

The super industry is currently under pressure, with APRA saying underperforming funds must close or merge. To date, 13 funds have disappeared under that pressure, and the regulator is targeting another 18 funds.

Given that retail funds have dominated the list of underperforming funds, it is likely that they will make up the majority of the funds that will leave the industry. However, some smaller industry funds are likely to merge or close down as well.

Brace for Tuesday … and the RBA’s latest interest-rate hike
Ukraine won’t confirm involvement in lethal blasts that rocked Russian border city
Destroyer HMAS Brisbane saves capsized yachties after 15-hour ordeal off Wollongong
Ash Barty honoured as NAIDOC’s person of the year
Thousands demand Redlands mayor resign over alleged drunk-driving crash
Jerry Hall cites reason for divorce from media mogul Rupert Murdoch after six years
Ask the experts: I have less super than others my age, what can I do to catch up?
Today's Stories