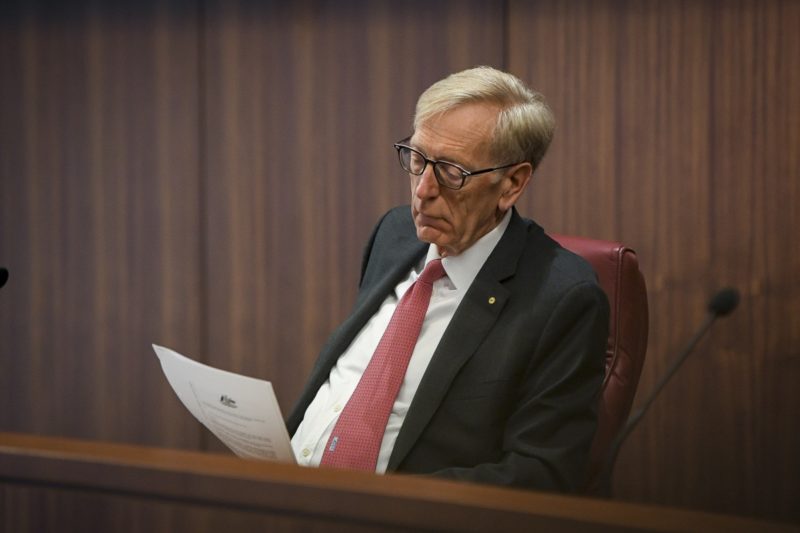 Attempts by NAB to keep seven key documents hidden from the public have been rebuffed on the bank’s final day before the royal commission.

On Wednesday afternoon, the bank argued hard for further investigations into its superannuation activities to be shut down and for its witness, Nicole Smith, to be excused.

After thinking on it overnight, Commissioner Kenneth Hayne announced on Thursday he would refuse NAB counsel’s requests. So the commission juggernaut rolled on with Ms Smith back in the hot seat till lunch time.

As a result the morning hearings revealed the bank could face possible criminal or legal action on 110 cases of late reporting of breaches of its licence conditions to regulator ASIC and four other cases of potential misleading and deceptive conduct. NAB owned up to 84 late-reporting instances.

The prolonged focus on NAB through the person of the remarkably composed Ms Smith seemed to cause embarrassment high up.

CEO Andrew Thorburn took to Twitter saying: “This week we’ve been confronted at the Royal Commission with examples of where we have failed to serve our customers with honour. I’m sorry. And my commitment is that we will learn and get better, so we can once again be a bank you respect and trust.”

This week we’ve been confronted at the Royal Commission with examples of where we have failed to serve our customers with honour. I’m sorry. And my commitment is that we will learn and get better, so we can once again be a bank you respect and trust. pic.twitter.com/yMGq7icgVu

Thursday’s hearings also revealed something unpleasant was happening inside NAB. The issue under examination was advice fees charged on a range of superannuation accounts that did not receive advice or have an adviser attached.

NAB took the position in negotiations with ASIC that some of these fees were for providing the possibility of access to service, rather than actually receiving anything.

Michael Hodge QC took up the issue with Ms Smith a number of times, using correspondence between NAB and ASIC, with members and internal documents.

“Yes, and our disclosure was not explicit on the types of services the member could expect to receive from their adviser,” Ms Smith replied.

What was really troubling about the revelations was the fact the bank seemed to have pressured Ms Smith, at that point an independent director and chair of NAB trustee NULIS, to agree with its characterisation of fees when she did not.

“And one of ASIC’s concerns was that this was a fee for service, not a fee for access to service?” Mr Hodge asked.

“And that was being said by NULIS to be a matter that it was disputing with ASIC?” Mr Hodge asked.

“I’m not sure where it says we’re disputing that with ASIC,” Ms Smith replied.

“Well, you knew that ASIC was saying that this was a fee for service rather than a fee for access to service?”

“Yes,” Ms Smith said. “And I believed it was a fee for service.”

“And nevertheless, you signed a letter saying it was a fee for access to service?” she was asked.

“And I had also signed off multiple other pieces of correspondence that said words like ‘It is a fee for access to and the provision of ongoing following service’.”

ASIC is still investigating and has not yet decided what action to take against NAB.