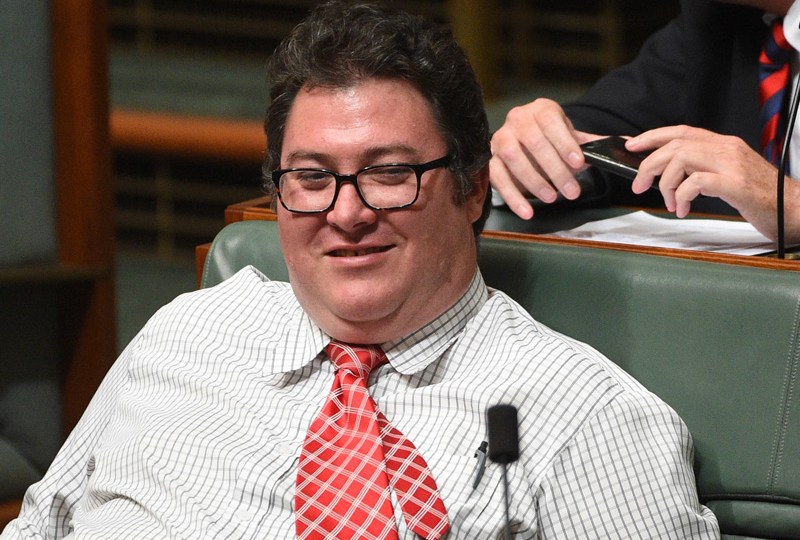 Divisions within the Coalition over superannuation are widening, with conservative Queensland MP George Christensen threatening to cross the floor if the Turnbull government fails to change its superannuation plans.

Mr Christensen’s warning comes amid ongoing anger within the Liberal Party about proposals to cap non-concessional super contributions at $500,000 and back-date the commencement date to July 1 2007.

The measures, which will save the budget $550 million over four years, are a bridge too far for Mr Christensen, who sits with the National Party.

“Quite frankly, what’s being proposed at the moment I just could not, in any good conscience, vote for,” he said.

The Labor Party would do this

He described the measures as a “Labor-style” policy and a “lazy government’s way” of achieving budget savings.

“Obviously the numbers are tight; it depends on how the Labor Party votes, (and) the crossbenchers vote.”

Mr Christensen, who was re-elected with a reduced margin in the north Queensland seat of Dawson, said the issue could have been the deciding factor in the neighbouring seat of Herbert, where a recount will soon get underway.

Super could have cost seats

“Did [superannuation] cost us the election? Well, obviously no it didn’t because we’re still in government. Did it cost us some seats? Maybe, in seats like Herbert where it’s coming down to the wire, perhaps it did make a difference,” Mr Christensen said.

He suggested further savings could be made from welfare to make up the difference and also flagged his opposition to the $1.6 million super balance cap.

The superannuation reforms are very unpopular within elements of the non-parliamentary Liberal Party and are believed to have cost the party donations during the election campaign.

During the election campaign, Prime Minister Malcolm Turnbull was adamant the reform package, which overall is estimated to provide $2.5 billion in budget savings, would not be changed.

But since the Coalition’s narrow election victory, he has been making compromising noises to the conservative wing of his party, saying he is listening “keenly” to their concerns.

Tasmanian Senator Eric Abetz has led the charge within the Liberal Party against the super changes and was expected to bring the issue to a head at the first party room meeting held on Monday.

However, while Senator Abetz asked one question on the issue at the meeting, decisions on the final shape of the policy were put off and are likely to be decided by party committees later this year.

It’s not only the conservatives

Since then, Senator Abetz has not let up on his super discontent.

“I note that in a bizarre way the commentary on this suggests that there’s a rump of conservatives [dissenting] on this issue,” Senator Abetz said.

Some of Mr Turnbull’s more moderate supporters are also offside on the issue, he says.

“Julie Bishop and Christopher Pyne were also uncomfortable with the [superannuation] policy positioning which would suggest that this is an issue that does reach out beyond the alleged divides within the party.” Senator Abetz told The Australian.

“So, let’s just get a bit of a reality check that this was in the budget, that (it) wasn’t properly ventilated through the party room.”

However, Ms Bishop moved to support the policy on Channel 10’s The Project earlier in the week.

“It’s not for tax minimisation, it’s not for estate planning,” she said.

“And there were significant savings in the changes that we proposed. So we have an obligation, I believe, to present to the houses of parliament the budget measures that we took to the election.”

Treasurer Scott Morrison said the government could address specific issues raised within the Coalition, but was adamant the overall package was needed to help retain Australia’s triple-A credit rating.