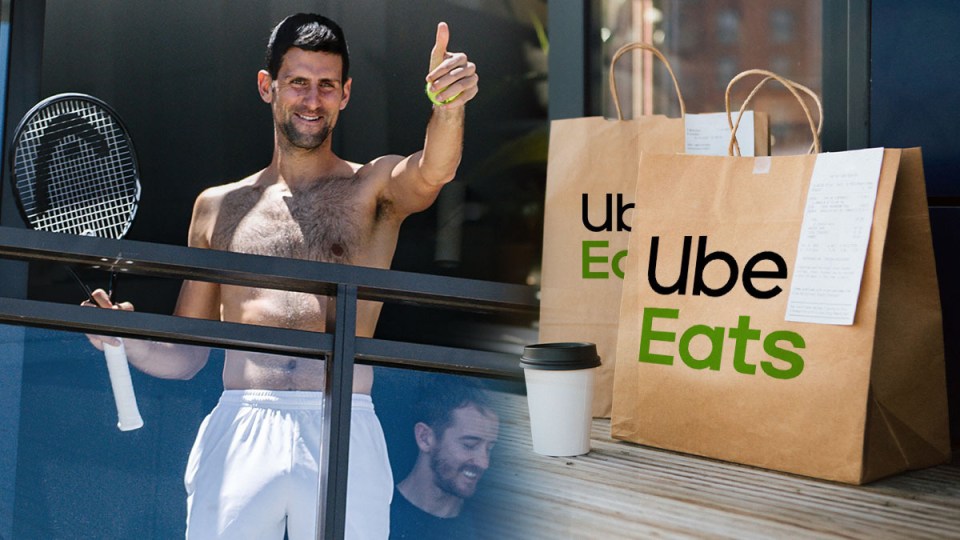 Tennis players cooped up in hotel quarantine are ordering in veggie bowls and big slabs of cake, as local cafes and restaurants report surging sales thanks to the Australian Open.

More than 70 tennis players have been locked in the Grand Hyatt and Pullman hotels in Melbourne for 14 days ahead of the Australian Open next month.

Chefs at the hotel are preparing meals for the tennis players, but many are shunning the food and turning to apps like UberEats instead.

Bernard Tomic and partner Vanessa Sierra said they were spending a whopping $200 daily on meal delivery, as the former world no. 17 was worried about his nutrition.

The New Daily spoke to several businesses surrounding the hotels that were experiencing a surge in sales as a result of the tennis quarantine.

Perhaps unsurprisingly, health-conscious eateries appear to be the most popular, with businesses selling eggs on toast, veggie bowls and smoothies reporting a roaring trade over the past week.

Melissa Di Mieri, co-owner of 1111SistasCafe in Albert Park, said hundreds of dollars in bulk orders were coming through every day – forcing the cafe to prepare smoothies in batches of 10 to keep up with demand.

“Instead of one small serving of a 5×5 cm cake, they’re ordering big slabs of it,” Ms Di Mieri told The New Daily.

“It’s very unusual for us, we haven’t had that kind of business since we opened [last August].”

Mammoth Cafe in Armadale has been another major beneficiary.

Manager Adele McMurray said players were putting through reams of orders for toasted sandwiches and puddings.

“We’ve been getting a lot of tennis players ordering over the last few days,” she told The New Daily.

Mammoth impressed Swedish player Cornelia Lister so much that she even gave the business a shoutout on social media this week.

The quarantine-induced surge is an unexpected but welcomed twist for Melbourne’s hospitality industry, which has been savaged by declining trade during the COVID-19 pandemic.

City-based food and accommodation businesses lost $1.9 billion during the pandemic last year, according to estimates published by the City of Melbourne.

But not all outlets are sharing in the tennis delivery boom.

‘The food is s***’: Athletes whinge about meals

The meal-delivery rush comes after athletes complained about the cooking at the Grand Hyatt and Pullman Hotel quarantine facilities.

“We just order UberEats, we don’t actually eat their food because it’s s***,” Ms Sierra said in a YouTube vlog on Monday.

One of Ms Sierra’s late-night deliveries ended in disappointment earlier this week, when quarantine staff refused to accept $60 worth of food after an 11pm cutoff.

The Australian Open has been subsidising meal delivery costs for players, offering each a $100 allowance each day.

Last Saturday, Victoria’s head of COVID-19 quarantine Emma Cassar encouraged players to take up meal delivery options if they didn’t like the food on offer at the hotels.

“There is one meal provided to people. If it’s not to your liking, then of course you can order UberEats,” Ms Cassar said.

An UberEats spokesperson said delivery drivers were being told to leave meals at designated drop-off spots.

“The build up to the Australian Open tournament is vastly different to previous iterations, with some players being kept content and well fed in quarantine by sourcing fresh food from an array of Melbourne’s best restaurants,” the spokesperson said.

A total of 72 tennis players were forced into 14 days of hotel quarantine last week after people on tournament flights returned positive coronavirus tests.

The move upset many of the athletes, including Spanish star Paula Badosa, who said in a now-deleted tweet that she had not been told about the prospect of a strict quarantine.

But after returning a positive coronavirus test of her own on Friday, Ms Badosa apologised.

“I talked about rules that changed overnight, but I understand the sad situation we are living. Sorry guys,” she tweeted.