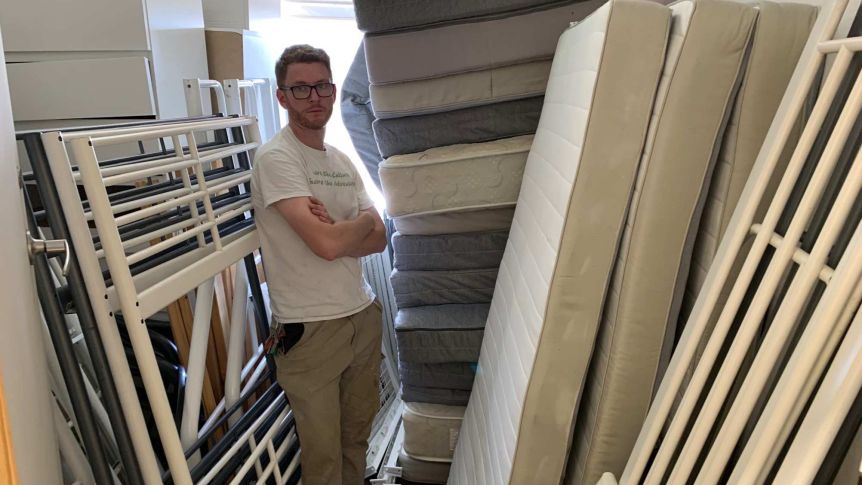 Matt Brass has exited the lease on his hostel business after enduring two lockdowns in Melbourne. Supplied: Matt Brass

With insolvency protections being wound back and JobKeeper ending in just two months, accountants are being prepared to deal with a wave of traumatised small business owners who have to wind up.

The federal government tweaked insolvency laws at the height of the pandemic in March to help struggling businesses stave off anxious creditors and protect company directors from being charged with insolvent trading.

Economic stimulus measures like JobKeeper have also been helping many pay staff wages when they have no revenue.

ASIC data showed the number of companies going into administration during the pandemic hit record lows, despite shutdowns. 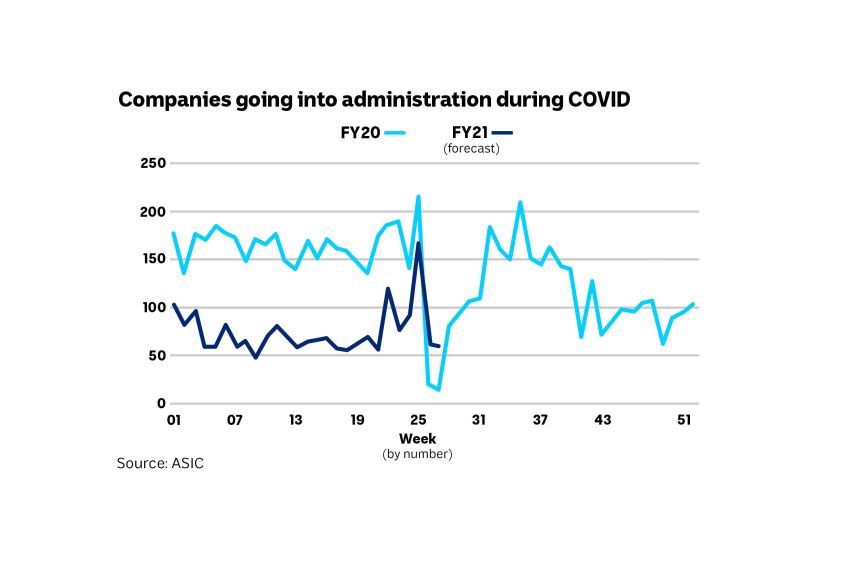 Some experts had been predicting that unviable businesses were merely being kept afloat by the insolvency protections and economic measures, and that a wave of failures would emerge in 2021 as these safety nets were removed.

As of January 1, company directors are again legally responsible for insolvent trading for all companies with more than $1 million in liabilities.

The length of time that creditors (entities owed money) have to wait before putting statutory demands on companies has also reverted back to 21 days, down from the extended six-month COVID-19 limit.

The amount of money creditors need to be owed before they can put pressure on has also been lowered from the COVID-19 level of $20,000 to $10,000. That is still higher than the pre-pandemic level of $2500.

Since the start of the pandemic, the federal government has also overhauled laws to make it easier for small companies to restructure and manage insolvency.

CreditorWatch chief executive Patrick Coghlan said 2021 will not be as bad as expected.

“There will be cleaner air and greater transparency for the business landscape in 2021,” he said.

“We will see an environment where viable companies can get back to business without being weighed down by unviable or fraudulent companies who have been camouflaged by safe harbour.

“We will see in 2021 an increase in business failures, but it now appears we will avoid a tsunami of failures, which was earlier feared might transpire.”

Treasurer Josh Frydenberg also expects the impact to be less severe than expected and he is heralding his government’s initiatives for that.

Given that, he again reiterated on Thursday that JobKeeper will soon end.

“JobKeeper is legislated until the end of March and it’s our intention for it to end there,” he said.

He delivered this comment at a Mexican restaurant on Victoria’s Surf Coast that has managed to wean itself off the employment subsidy entirely as it booms during the summer months.

But even the restaurant’s owner, Josh Friend, told journalists he was worried about what would happen to some businesses in Torquay if the cooler months hit and international travellers have still not returned.

“We’re one of the lucky businesses with outside seating,” he said.

“There’s always a concern for that time of the year, maybe more so once JobKeeper ends. To be honest, we just want to get through these next few weeks.”

How are businesses feeling as they go into 2021?

Other businesses in badly hit sectors are feeling less optimistic.

Matt Brass owns a company in one of the sectors most affected by COVID-19: Tourism.

In early 2020, after more than a decade spent pouring his heart and energy into his two Melbourne hostels for international travellers, they had just started to bear fruit.

“Just before COVID, I was elated,” he said.

“I had finally managed to drop down my hours after six or seven years of gruelling work.”

Then COVID-19 hit. International travellers fled the country and tourism ground to a halt.

Landing Pad’s revenue is now down more than 80 per cent.

“Seeing your life’s work disintegrate makes it hard to use the spare time to renovate your bathroom,” he said.

As his business enters 2021 and international travel has still not returned, Mr Brass has made the difficult decision to exit the lease on one of his Melbourne hostels.

He is contemplating what to do with his other hostel in Melbourne’s north as the pandemic drags on.

“We’ve come to the realisation that winning in this market looks like not losing everything. We see this as a full tactical retreat. There’s no point operating when the market doesn’t exist,” he said.

“I got to the point of saying, ‘I want this to be over. It’s just too painful.’

“For us, avoiding bankruptcy is strategic. We have to avoid bankruptcy.

“This is not a short crisis. This is a long crisis.”

He said Landing Pad was not being wound up but would continue with the help of four staff on JobKeeper subsidies.

His plan for 2021 is to find another hostel space in the CBD that he could reopen once international travel returns.

He said he was not too worried by the removal of insolvency protections for struggling companies but was conscious that JobKeeper would end in March.

“I think June is when the rubber hits the road. That’s when the really tough decisions are being made,” he said.

“As a small business operator, the existential threat of insolvency or bankruptcy is something I am aware of it. But really, it’s about trying to pay staff and keep the lights on.”

What could still come?

Restructuring and insolvency expert from law firm Ashurst, Michael Sloan, is another expert who is unsure if a wave of business failures will come in 2021.

He said COVID-19 had shown the “remarkable resilience” of Australia’s economy.

“If there’s enough fat and you have to cut back, then there’s enough there to survive. Australia has been doing so well for so long that it can trim off some fat,” he said.

However, he agreed with Mr Brass that the wind back of JobKeeper may be the true test in 2021.

“It is paying wages and protecting the family home that really keeps financially distressed business owners awake at night,” he said.

“When the government stimulus stops and banks and landlords begin to take recovery action then many small and medium-sized businesses will face their true COVID financial test.”

The industry group for accountants, CPA Australia, had been so worried about a wave of insolvencies in 2021 that it co-founded a pilot program to train accountants in dealing with their clients’ mental health issues.

“The anticipated wave of insolvencies will be less diffuse but more concentrated in certain sectors of the economy,” she said.

“Small tourism operators are potentially looking down the barrel of months of rolling border closures. They’re likely to be at the top of the list of businesses which may close their doors permanently.

“CBD-based hospitality and retail businesses are likely to experience delays in the return of city workers and reduced traffic volumes longer term, making them another at-risk sector.

“Talk that the magnitude of insolvencies won’t be as bad as originally feared downplays the human dimension. For people who are put out of business by the pandemic, the experience will be traumatic.”

She believes 2021 will still be a year of hard conversations.

“Convincing a client to confront the reality of their economic predicament can be very hard, not to mention emotional,” she said.

“As they say, ‘hope springs eternal’, and when you advise a client that it’s time to draw a line under their losses and shut up shop, you’re taking away any hope of business recovery.

“In many cases, once this reality is confronted, things actually get easier. There are mental health benefits for practitioners and clients in being empowered to take practical action.”

A wave of COVID-19 business failures may not come, but 2021 will still be excruciating for some