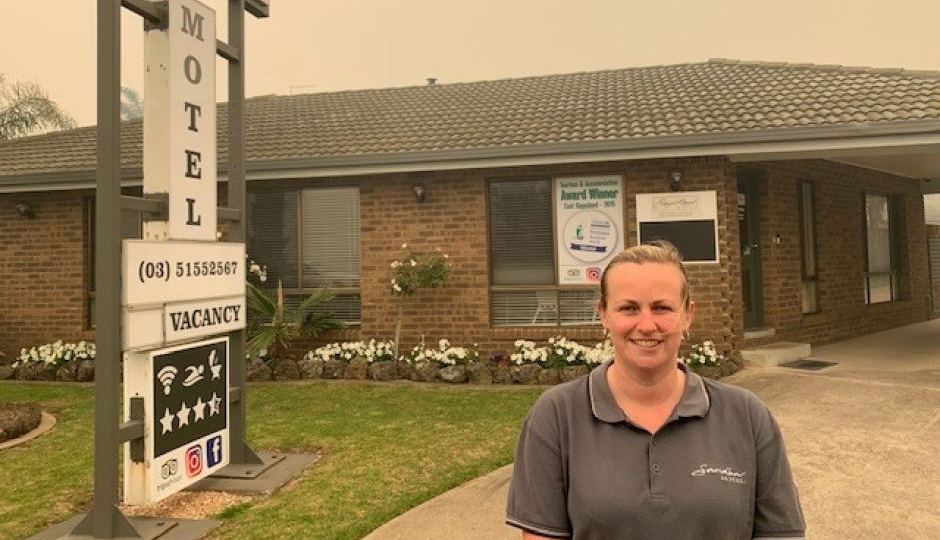 Lakes Entrance accommodation and tourism operators are hoping a flurry of visitors this Australia Day long weekend will boost turnover after fires ruined their summer trade.

A four-hour drive from Melbourne, Lakes Entrance could affectionately described as the ‘Tweed Heads’ of Gippsland.

But with tourism numbers plummeting as a result of the recent East Gippsland fires, many small businesses have reported a 90 per cent drop in tourist traffic for what should be their busiest trading period of the year.

Please come back to Lakes Entrance

Like many of the older-style 1960s to 1980s-era motels along the esplanade, The Sandbar Motel largely services a clientele of young families and grey nomads who enjoy the variety of activities and flat accessibility of the town.

Kellie Makowsky and her husband, who began leasing the 10-room accommodation business eight months ago, depend on the summer tourist season to get them through the winter months.

Just after Christmas, we started seeing cancellations coming in from Sydney to Lakes Entrance, because of the bushfires in New South Wales,’’ Ms Makowsky said.

“From December 29 onwards, we were hit with fires here in East Gippsland and we had a full house cancel, right up to the end of January into February. So yes, it has impacted us really hard.”

As the bills keep coming in, rent, utilities and staff wages, any halt to the cash flow of a small business results in a ripple effect across the community.

“We’re all hoping that we can get some government assistance or mental health help to get our books all organised,” Ms Makowsky said.

Like the majority of business owners in town, there is a level of apprehension about the coming months – particularly a sharp drop in international tourist bookings.

“Before the first fires came through we had a lot of Americans and Europeans, because the dollar is so good to them when they come here and we had a lot of Chinese, Indians and Sri Lankans,” Ms Makowsky said.

“But now we have no bookings forward at all from international tourists, which is what we depend on in the quieter months.”

Ms Makowsy said much of the media coverage of the fires had been interpreted by travellers that the whole of Gippsland was on fire and that all roads were closed east of Bairnsdale.

She has found that many city dwellers did not understand the scale of the region, and assumed that even towns that were substantial distances away from the fires were still under threat.

A lot of countries have put out a travel warning to not visit Australia because of the bushfires, which is really sad to see.’’

With the Princes Highway to Lakes Entrance fully open, it is hoped that a substantial downpour of rain will help clear the smoke haze, which remains the most volatile obstacle to return visitors to the town.

In recent years, Lakes Entrance has become a recreational fishing hotspot for Chinese holiday makers, with many of the old motel businesses being purchased by Chinese owner-operators.

“A good thing is that on the Australia Day weekend we’re having the Chinese New Year. A lot of people are loving that because we want to start our new year again,” Ms Makowsky said.

She said she had received a much-needed boost in bookings for the long weekend.

We‘ve got a few things going on, the carnival, firecrackers and fireworks for Chinese New Year, as well as a vintage car meet-up,’’ she said.

Ms Makowsky stressed that one way mindful visitors could help support small family-owned accommodation and tourism operations doing it tough in Gippsland was to book directly with the business.

Online booking sites take up to 20 per cent commission from business, and often will not supply customers with a refund in the case of a natural disaster.

James Peel is a fourth-generation boat captain with Peels Tourist and Ferry Service at Lakes Entrance.

The business, which was established by Mr Peel’s great grandfather in 1920, will celebrate 100 years of operation in December 2020.

It runs tours on the Gippsland Lakes, which showcase the lake system’s dolphins, seals and diverse bird life.

The tour company usually operates four cruises a day, 300 days a year, with the period between Boxing Day and the middle of January being the peak period of the year.

But this year tourist numbers have plunged by 90 per cent due to the East Gippsland fires, denying the Peel family and other tourism businesses in the region vital income for the year.

“We’re hoping that a lot of people come down on the Australia Day weekend at the end of January to try and pick back up, but unfortunately a lot of people have to go back to work,” Mr Peel said.

With school starting at the end of the month I don’t think we’ll get that peak period again until Easter, which is going to be a struggle for a lot of businesses.’’

On a lighter note, Greg Jerkins, who owns the Footbridge Mini Golf and Ice Cream Shack, said he felt slightly more optimistic about visitors coming back to the town.

“People have been coming from Maffra, Sale or Traralgon just for the day, just to help support Lakes Entrance in general,” Mr Jerkins said.

“This last week our turnover has been just over 10 per cent of our normal turnover.

“On Sunday we had a nearly normal day, but it is going to take a long while before we get our numbers back.”